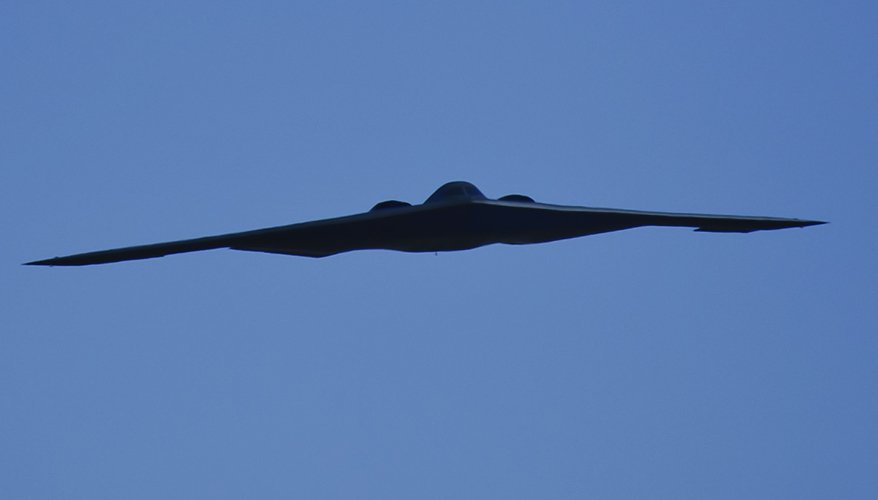 PALMDALE, California — Only a few minutes before the new B-21 Raider was rolled out of its hangar in Northrop Grumman’s high desert facility, its predecessor the B-2 Spirit flew above the crowd as a company employee sang the National Anthem.

Comparisons between the two strategic bombers are inevitable as they are similar in shape — both so-called “flying wings.”

Northrop Grumman also built the B-2, which made its public debut in Air Force Hangar 42 at the contractor’s Palmdale factory almost 34 years ago.

Prior to the roll-out ceremony for the Raider, Northrop’s program manager for the B-2 Shaugn Reynolds stood in front of the Spirit of California, one of the 20 stealthy bombers remaining in the Air Force inventory.

“As the world’s only long-range penetrating strike platform, you can tell them the flying wing is here and alive and well,” he told reporters.

It may look so, but it’s not the same aircraft that the Air Force began operating at the tail end of the Cold War.

The Spirit of California was wrapping up a year-long refurbishment where it had its stealth coating stripped off and replaced with the latest top-secret radar-resistant material, Reynolds said.

“Then we go through modifications — both structurally and with the avionics components — and refurbish them, pulling it all back together within 365 days,” he said. B-2s come in for a refitting every nine years, he added.

The new tech and materials can be compared to the iPhones of a decade ago and what the public is using today. “That’s the technology advancements that you’re seeing here on the material side,” he said.

Although he was prevented from talking specifics, the radar cross measurement, the number the program uses to assess how “invisible” the B-2 is to enemy sensors, is “significantly improved” over how it performed 10 years ago, he said.

After some flight checks the refurbished B-2 will be returned to the 509th Bomb Wing at Whiteman Air Force Base, Missouri, he said.

Choosing the flying wing design wasn’t a given, assistant secretary of the Air Force for acquisition, technology and logistics Andrew Hunter, told reporters later. “There were thousands of designs proposed and this was the winning design,” he said.

Kathy Warden, president and CEO of Northrop Grumman, said, “We iterated … on thousands of designs before picking the design that met the aircraft requirements, and the flying wing is the best alternative for meeting those requirements and affordability targets,” she said.

The company’s experience building a stealthy flying wing has helped in the development of the B-21 Raider, Reynolds said.

“We look at the B-2 as risk reduction for the B-21,” he said. One of the major benefits of building both flying wings is in manufacturing techniques, he added.

“We still have technicians that are still with the company that did the [B-2] production line,” he said. They are experts in the manufacturing process, he added.

Meanwhile, the B-21’s development has helped keep the B-2 relevant as some of the technologies in the new program have been integrated into Spirit, he said.

One similarity between the two bombers Northrop Grumman and the Air Force wouldn’t want to see is the B-2’s history in Congress. Originally slated for more the 70 bombers, the program costs spiraled as the end of the Cold War approached, and the program was terminated with only 21 Spirits constructed. One was later destroyed in a crash.

The Air Force is aiming for 100 B-21 Raiders at $550 million each in 2010 dollars. Both Hunter and Warden said the program is on schedule and on budget but declined to update the current per-aircraft cost.

Correction: A previous version of this story misspelled the first name of Shaugn Reynolds.

Re: B-2 Spirit, B-21 Raider Draw Inevitable Comparisons

Irv Waaland, one of the three chiefs of the B2 design team died about six months ago. I wish he had been able to see the roll out of this descendant aircraft. Irv could have added much background to this article. He was my brother in law.

Original ATB (B-2) was 132 aircraft. 120 with active bomb wings and 12 always in depot. The 70 number quoted was an interim proposal submitted to Congress as support for the B-2 waned as it was toughted in the press and in the AF budget (General McPeak- CSAF)as a"strategic" / nuclear only aircraft. The AF and congress did not weigh in the B-2's conventional capabilities