B-21 Raider a Pathfinder for Digital Engineering Revolution 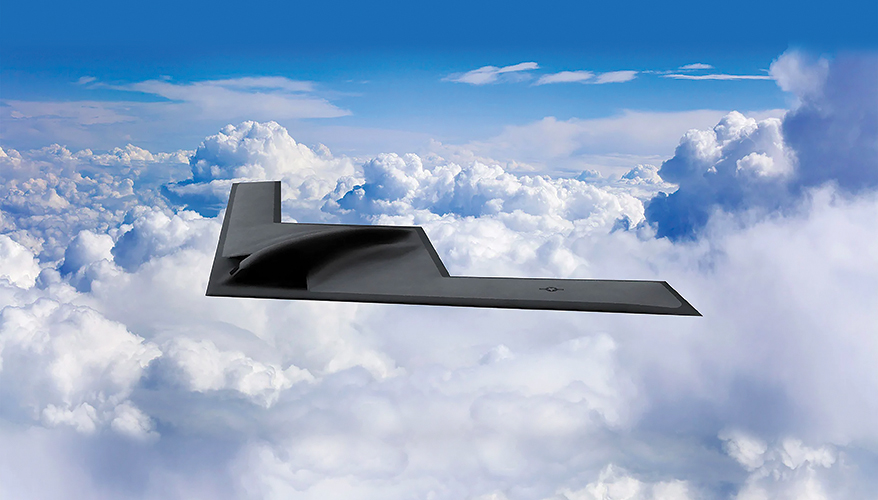 PALMDALE, California — Just after dusk on Dec. 2 — to the sound of swelling music and applause from thousands of workers and dignitaries — Northrop Grumman employees removed a white shroud from the B-21 Raider and tugged it out of its hangar for the whole world to see.

Most of the aircraft anyway.

About one-fourth of the bomber — the tail-end specifically — was kept inside Air Force Hangar 42 to prevent overhead intelligence from seeing the aft section, a crucial part of the overall system that gives the aircraft its stealth capabilities. However, it was overcast, so prying spy satellites couldn’t have seen much anyway.

Secretary of Defense Lloyd Austin III in a speech after the unveiling said the B-21 “is a testament to America’s enduring advantages in ingenuity and innovation. And it’s proof of the department’s long-term commitment to building advanced capabilities that will fortify America’s ability to deter aggression today and into the future.”

The B-21 Raider is being called a “sixth-generation aircraft” and is designed as a low-observable, or stealthy, strategic bomber that can penetrate air defenses and deliver nuclear or conventional weapons deep in enemy territory and return undetected to a base in the United States.

Despite revealing the nation’s newest long-range strategic bomber to the public for the first time, this is still a top-secret program, as Northrop Grumman executives and Air Force personnel reminded reporters in a series of briefings throughout the day.

What is the wingspan? They couldn’t say. What is the aircraft’s range? Can’t tell you. How much do you think each aircraft will cost taxpayers? That’s classified.

Yet the company and government representatives did have a good news story to tell: namely, how industry and the Air Force went from signing a contract in 2015 to having six prototypes in various stages of production in a little more than seven years.

Test flights are expected to begin sometime in 2023 — meaning the program could go from concept to flight in eight years.

Northrop Grumman is aiming to deliver the first Raiders to the Air Force by the middle of the 2020s. The first squadron will be located at Ellsworth Air Force Base in South Dakota.

“We are taking technology from the future and bringing it to the here and now,” Kathy Warden, Northrop Grumman president and CEO, said in a press briefing prior to the aircraft’s debut. “It’s not just about what the technology advancement of the aircraft means, but it’s also about how we went about developing this aircraft.”

The B-21 was a digitally designed bomber from day one, meaning the company abandoned the traditional means of designing aircraft on paper, CAD files and clay models and embraced the new era of digital engineering.

The technique uses computer modeling and data that represent the characteristics of complex systems. Engineers can run component tests on computer simulations rather than building real-world equivalents, which takes time and money.

Developers can then create an entire computer-simulated aircraft — what’s known as a “digital twin” — on which to run tests.

“We iterated on thousands of designs for this aircraft in a digital environment before selecting the design that would go forward,” Warden said.

The Air Force chose a wing-shaped design, similar to the first stealth bomber, the B-2 Spirit, also built by Northrop Grumman.

“It’s going to change the way we do things here in the future,” Air Force Chief of Staff Gen. Charles “CQ” Brown said of the digital engineering revolution.

The all-digital open architecture will also make the aircraft more adaptable, said Andrew Hunter, assistant secretary of the Air Force for acquisition, technology and logistics. The B-21 is designed to penetrate today’s air defenses. But potential opponents will inevitably improve their radars and other sensors. The Air Force will be able to perform upgrades to the electronic systems to keep up with them.

“As the missions that we have to perform change, and as the threat evolves, the B-21 will continue to be able to perform that mission for the long term,” Hunter said.

“Digital engineering and digital tools have enabled us to iterate the designs, get to tests faster and do more testing before we actually fly the airplane,” said a source with intimate knowledge of the program who provided reporters with background information.

“It has enabled us to make the first production airplane. That reduces risk as we go into production,” the source said.

Tony Nolls, B-21 build lead at Northrop Grumman, said a great deal of work went into creating the digital models.

Company employees are in two primary sites, Palmdale and Melbourne, Florida. Maintainers, pilots, manufacturing experts, engineers and Air Force personnel all worked together on the model, he said.

Everyone — no matter where they were physically located — was connected to a virtual room where work proceeded, even during the worst part of the COVID-19 pandemic.

“We didn’t have to wait to share information. We shared live. All the walls were down. Everybody saw [a problem] as it happened and we dealt with it immediately,” he said.

“We were solving problems that weren’t even problems yet,” he added.

Today, technicians are using augmented reality goggles as they put the prototypes together. They can see things that are there and that are not there but will go in a certain spot in the future. And when doing inspections, the AR helps them understand where every component is supposed to go, Nolls said.

All these new digital engineering techniques will upend the way future programs are developed, Brown said. There just aren’t as many “test points” needed, which speeds the process up, but might upset the traditionalists, particularly in the test and evaluation community.

“This is a cultural shift as well … for our test community. They like testing,” Brown said.

After the Raiders go into production and are sent to the Air Force for operations, the open architecture will keep them relevant, the source said.

“Our adversaries are always changing, always improving. We’re always trying to stay one step ahead of them and that is what the B-21 allows us to do,” he said.

The ability to rapidly swap out both software and hardware will make the aircraft more flexible, the source said. The aircraft will evolve.

“It will be the most advanced aircraft today, but with what we have built in, it will continue to be for the next 30 to 50 years,” the source said.

In addition, maintainability has been a key requirement from the start, he said. The Air Force and Navy in recent years have struggled to keep their aircraft fleets operable due to parts shortages and obsolescence, lack of maintainers and other problems.

“The key here is you have to have an aircraft that is maintainable and is a daily flyer for the United States Air Force,” he added.

Next will be runway tests where the B-21 will roll down the tarmac without taking off. Two pilots will be in the cockpit for those tests, one employed by Northrop Grumman, the other an Air Force officer.

They both have been deeply involved in the development of the B-21, particularly in matters important to those who will be flying the aircraft.

“One of the key tenets of the program has been risk reduction, and really focusing on doing as much of that testing upfront to reduce the risk before we go into flight testing,” said Lt. Col. Clifton Bell, head of testing at Edwards Air Force Base in California.

Chris Moss, Northrop Grumman’s test pilot, said the pair have been working extensively on a high-fidelity simulator for the past six months that allows them to evaluate the aircraft, get comfortable with how it handles, understand the flight control systems, and how they work on the aircraft.

Using the simulator helps them understand the difference between something going wrong, and the way the aircraft is supposed to operate.

“We spend a lot of time on simulators working on that,” Moss said.

Despite the digital engineering push, some real-word testing is being conducted aboard a flying testbed, which is a business jet that can carry components and instruments, Bell said.

“We’re flying with the systems before the B-21 has actually flown yet,” Moss said. Along with being a less expensive alternative, the test­bed allows them to find and fix problems before the components are integrated on the Raider, he added.

They have also used one of the six prototypes in production to do load calibration and to test the structural strength of the airframe, he added.

Bell said during testing, “You always expect to have some sort of discovery, and it’s just that process of if you discover something, you compare it to what you’ve found in the model, and then you go update whatever you need to update and then you keep pressing forward,” he said.

“We use lessons learned all the time from other flight test programs,” Moss said. “What did they miss? Where do we need to look? What kind of things did they not think was a problem and ended up being a big problem? Because a lot of times the things that surprised you the most are little things that you didn’t think would have any issues at all.”

Still, a high-fidelity simulator is no substitute for the real, upcoming test flights, Moss said.

“We can’t validate the model until we actually go and fly. So, all we can do is be prepared for everything that we think may be a problem, or could be a problem,” he said.

As for when the B-21 leaves Air Force Hangar 42 and takes to the sky, officials are aiming for mid-2023, but say that is not engraved in stone.

The source familiar with the program said the timing of the B-21’s first flight will be “data driven.”

Tests during the beginning of the year will be key.

First will be runway only tests, where the B-21 will taxi at high and low speeds, he said.

“We kind of have a saying that ‘the airplane is the boss,’ and the airplane will fly when it’s ready to fly,” he said.