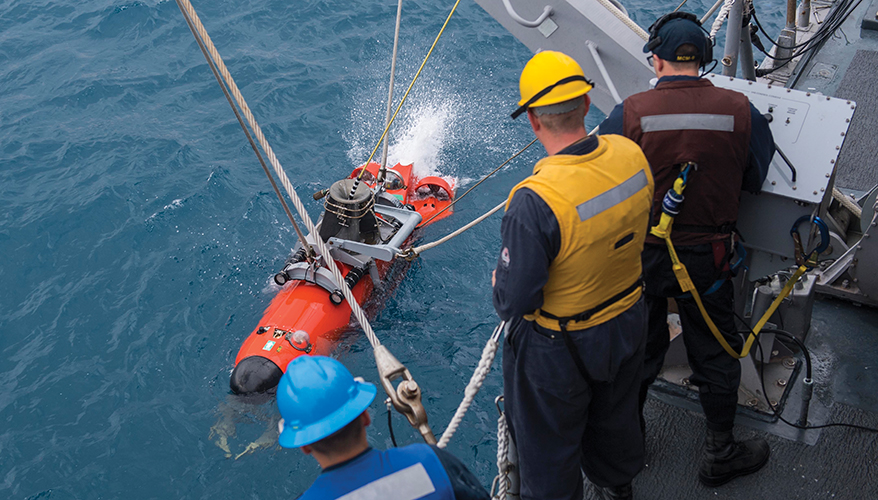 Sea-based mine warfare is in a state of flux, suspended between decades-old, manned technologies and a long-promised future of multi-domain unmanned drones capable of finding and neutralizing enemy mines or covertly mining in deep and shallow waters.

Eight of the 14 Avenger-class ships built remain in service, forward-deployed in Japan and Bahrain. According to Naval Air Systems Command, 30 MH-53Es of the 44 delivered remain in service with two squadrons, HM-14 and HM-15. But the Navy’s number fails to account for the four MH-53Es severely damaged last July when a major thunderstorm tore across NAS Norfolk, tossing at least one Sea Dragon upside down.

Retirement of the minesweepers and helicopters has been planned for more than a decade, but operational delays for their primary replacement — the littoral combat ship and its mine countermeasures package — have moved out-of-service dates back again and again.

Navy public affairs officer Lt. Meagan Morrison said, “The Navy will comply with 2021 NDAA requirements before retiring legacy MCM [mine countermeasure] platforms. Those retirements are based on fielding expeditionary modular MCM capabilities and not on a target date.”

Last March, Fincantieri Marine Systems North America was awarded a maintenance contract for the Avenger-class minesweepers. The contract could be worth up to $78 million, according to Fincantieri Marine Group director of communications Eric Dent, if the Navy takes up its option for four years of maintenance, suggesting that the ships may serve until 2026 or 2027.

The 20-year-old saga of costly missteps in the development of the littoral combat ship, or LCS, has been mirrored in some ways by the decade-plus development of the modular MCM package, one of two mission packages the LCS is to feature.

Six systems make up the package, including three airborne detection and neutralization systems fielded by MH-60S helicopters and MQ-8B/C Fire Scout drones, and three in-water systems including a mine hunting sonar, a minesweeping system operated from a common unmanned surface vehicle and an unmanned underwater vehicle capable of finding mines buried in the sea floor.

“The program remains on track to deliver four MCM mission packages with trained sailors in 2024,” she added. “This timeline supports the planned retirement of the Avenger-class ships and MH-53E helicopters.”

The service plans to buy 24 packages to equip 15 of the Independence-class LCS. That leaves nine mine countermeasure packages for potential use on “vessels of opportunity,” as Capt. Mike Egan, branch head for mine warfare in the Office of the Chief of Naval Operations, said last May at the 2022 International Mine Warfare Technology Symposium of the Mine Warfare Association.

Those may include the Navy’s expeditionary sea base ships, flexible vessels that also deploy expeditionary mine countermeasures companies. The companies are teams of explosive ordnance disposal sailors who deploy from shore and ships to detect, classify and neutralize mines.

Anthony Freedman, senior research scientist with the Center for Naval Analyses, is a “big fan” of the expeditionary companies. The teams, which include divers, operate rigid-hull inflatable boats and deploy the “Knifefish” underwater unmanned vehicle that is part of the LCS mine countermeasure package and “are relatively low signature, particularly if they’re operating from shore,” he said.

“That makes them relatively more flexible for MCM as opposed to an LCS, which has to basically sit in a box — or [a] position — its systems can operate from,” he said.

Morrison said the ships and sailors “will provide our Navy’s MCM capability, together as a modular force, replacing the legacy forces without a gap in MCM capability for the fleet commanders over the next three to five years.”

But Freedman is concerned that these capabilities may not be effective in a contested environment, a view he said is shared by some in the Navy. “Our current and projected systems [for MCM] are not really suitable for that environment, even though expeditionary MCM is probably the best capability in that environment.”

A range of mainly unmanned surface and sub-surface mine countermeasures sensors and neutralizers — which could add capability to the systems the Navy will field this decade — are still in development at the Defense Advanced Research Projects Agency, the Office of Naval Research and elsewhere.

Freedman said some of these technologies have promise but added that most remain years away from operational capability, unlikely to be fielded by 2030. And they don’t yet consolidate the functions of mine hunting and neutralization into one platform, he added.

“The way we do mine hunting is with a number of different systems that have to go back to the same location,” he said. “You detect them. You go back and you classify them, you identify them and then you have to neutralize them. Often you have to use different platforms, people or systems to do this.”

That can be effective for static mines, Freedman explained, but countering newer technologies such as mobile mines may require “a single detector/engage platform which could sense then go all the way through neutralization.”

“If you look at the LCS MCM package, it still has the older paradigm, different systems doing different things,” he said.

Morale is low in the mine countermeasures community because it hasn’t been well integrated with the Navy’s major commands. There are few MCM advocates among Navy and Marine Corps leadership because relatively few senior officers have experience with it, Freedman said.

“It has been somewhat neglected for a long time, forgotten about until something happens,” he explained.

The Navy is now reorganizing its mine countermeasure squadrons into task forces with members within each of the geographic combat commands. “I think that could be a step forward for the community,” Freedman added.

As for placing mines, the Navy declined to comment. But it’s a mission that could give the service an asymmetric advantage in a conflict with China or Russia, according to Freedman.

Freedman said he’s not able to speak publicly about the Navy’s largely classified mining capabilities in his advisory role with CNA. But the service has a renewed emphasis on mining, with the Navy transitioning the mission from the surface fleet to commander, submarine forces, known as SUBFOR, he said.

That could fuel progress in fielding new types of subsurface-deployed mines like the Clandestine Delivered Mine or the Hammerhead moored anti-submarine mine to replace the Mark 67 Submarine Launched Mobile Mine the Navy has had in service since 1983. Last March, General Dynamics Mission Systems was awarded a $92.9 million contract to deliver Hammerhead prototypes by 2023.

Transported to an area and released by an extra-large unmanned underwater vehicle like Boeing’s Orca, Hammerhead can lie in wait until remotely activated. Then, once it detects an adversary submarine, it can release a Mark 54 lightweight hybrid homing torpedo autonomously.

But a September 2022 report from the Government Accountability Office states that the effort to rapidly deliver five of the unmanned subs “is at least $242 million or 64 percent over its original cost estimate and at least three years late,” with delivery now expected between February and June 2024.

In April 2022, the Navy’s Program Executive Office Unmanned and Small Combatants issued a request for information on its Mining Expendable Delivery Unmanned Submarine Asset, a tactical clandestine mining system with an expendable unmanned underwater vehicle capable of being torpedo-tube launched from Navy submarines. The system consists of a medium-class unmanned, underwater vehicle, supporting equipment and payloads. The service has specified that four prototypes are to be delivered by fiscal year 2026 and wants industry feedback on development.

A Pacific Air Forces press release detailed a Navy mine exercise on Oct. 24 during which Air Force B-1B bombers from the 37th Bomb Wing flew from Andersen Air Force Base in Guam with 21 Navy-assembled Mark-62 Quickstrike 500-pound airborne mines aboard. Similarly, a 28th Bomb Wing B-1B dropped a 2,000-pound Mark-65 Quickstrike mine off the California coast in August.

Further development of the Quickstrike family of shallow-water mines appears to be underway. Derived from the Mark 80 series general purpose bombs, they’re adapted for mining via the installation of a nose-mounted arming device and a target detection device integrated in the bomb’s tail. The target detection device can detonate when a vessel passes within range of its position on the seafloor.

The Air Force declined to comment on the airborne mining mission. Maj. Joel Banjo-Johnson, chief of public affairs at Air Force Global Strike Command, said the service could not speak about airborne mining “because the Navy owns that mission.”

In September 2018 during exercise Valiant Shield in Guam, a B-52 tested a 2,000-pound version equipped with a joint direct attack munition-extended range kit. With the addition of GPS-guidance, the kit could allow aircraft dropping the mines to stand-off as much as 50 miles. That would aid bombers or tactical jets in a contested environment like the South China Sea. F/A-18s have also flown with Quickstrike mines in tests.

But they would still be vulnerable to Chinese land and sea-based air defenses. That explains the remarks made by Capt. Chris Merwin, then head of the mine warfare division at the Naval Surface and Mine Warfighting Development Center, in a November 2019 U.S. Naval Institute News article.

“The future of mining will be [unmanned underwater vehicle] clandestinely launched mines. And that’s probably as much as I can say here,” he said.

JUST IN: Allied Naval Leaders Warn of New Age of Mine Warfare

Re: Navy Mine Warfare Teeters Between Present, Future

Mine Warfare has been treated as a major element of Integrated Underseas Warfare since World War I. There are many WW-II and Cold War examples where each element functioned with greatly increased efficiency and effectiveness with fully exploitation of the information available from intelligence systems. After the Cold War, major component systems were eliminated without replacement - for example, bottom mounted Capitor ASW mines ( bottom mounted torpedoes )and their developing integration with advanced sonobuoy fields to cover the Greenland-Iceland- United Kingdom gap. While the piece parts still exist for such an integrated underseas warfare system within the USN, the resources that supported coordinated integration have disappeared. Meanwhile the very nature of maritime traffic has changed dramatically - a single PANAMAX sized container ship carries as much cargo a half a 50 ship WW-II convoy (` 1943) and moves at 24 knots rather than 12 knots. The global inventory of Panamax sized container ships exceeds 11,000. This flow of traffic does not lend itself to escort by ASW surface combatants and is vulnerable to complex target deactivation techniques to prevent unloading in port container handling facilities by precision strikes on the port facilities using small numbers of precision strike weapons.

I would suggest a series of articles on integrated underseas warfare and its potential evolution.

James O'Brasky at 10:41 AM
Re: Navy Mine Warfare Teeters Between Present, Future

I agree with James O'Brasky's call for a series of articles on integrating USW... a discussion that hasn't taken place since the Cold War. Mining capability development and inventory requirements would greatly benefit from serious discussions around the requirement and objectives for maritime mining. The fleet planners and especially those who will deliver and place minefields need to take a leading role in this discussion (granted that most of this will necessarily take place in a classified forum).

Ron Swart at 11:16 AM
Re: Navy Mine Warfare Teeters Between Present, Future

The Navy's Expeditionary MCM Companies utilize the MK-18 UUV Family of Systems, which is the Kingfish and Swordfish, vice the Knifefish UUV, which will be part of the MCM Mission Package.

Tom Davis at 12:36 PM
Re: Navy Mine Warfare Teeters Between Present, Future

ExMCM Companies use the MK-18 Family of Systems UUVs- Kingfish and Swordfish vice Knifefish. Knifefish will be a MCM Mission Package system in the future.