JUST IN: Navy Moves Out on DDG(X) Requirements 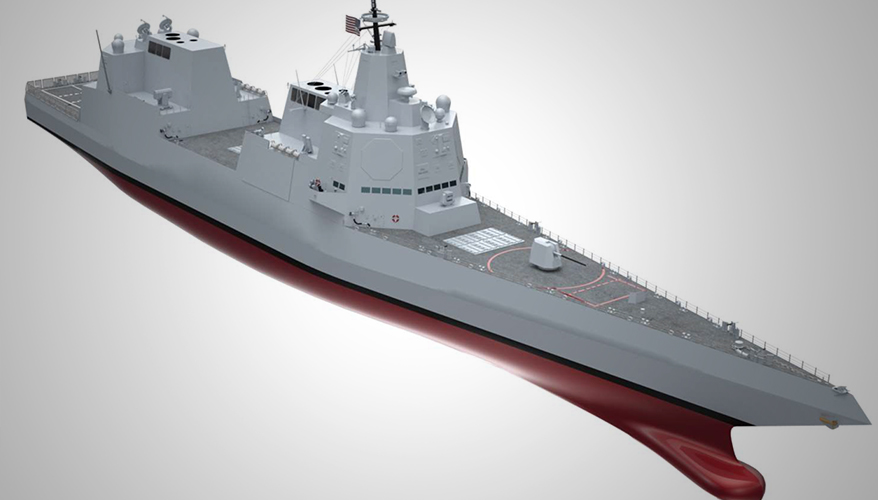 ARLINGTON, Virginia — The Navy has settled on the topline requirements for its future DDG(X) surface combatant, a senior service official said Jan. 11.

The program was established in 2021 and is envisioned as a follow-on to the Arleigh Burke-class DDG-51 destroyer. The Guided Missile Destroyer Program Office (PMS 460) has spent the past 12 months working on preliminary designs, according to the Navy.

“I think we have a good sight picture of the DDG(X) top level requirements. They have been endorsed,” Rear Adm. Fred Pyle, the Navy’s director of surface warfare, said during a panel at the Surface Navy Association’s annual conference in Arlington, Virginia.

The Navy envisions the ship being ready in the 2030s, just in time for it to host a series of next-generation weapons that are still under development.

One of those sensors is the SPY-6 radar, built by Raytheon, that is currently being integrated on Navy ships. The powerful sensor will inevitably be improved upon, but may require more power by the 2030s, Pyle said.

As for directed energy weapons, the Navy has now received six high-energy lasers with integrated optical-dazzler and surveillance, or HELIOS, systems from its maker Lockheed Martin. They are now being integrated onto ships, said Rear Adm. Seiko Okano, program executive officer for integrated warfare systems.

Pyle said systems such as HELIOS are now mainly tasked for self-defense, but that will evolve to offense.

“We're going to continue to invest with directed energy to get to those higher levels so we can move beyond self-defense and get into more warfighting missions,” he said.

The DDG(X) is expected to provide more on-board energy to provide the needed energy for more powerful radars or lasers, he added.

“Shipbuilding is a long game, right? So when we achieve the directed energy power that we're looking for, or high power microwaves — or whatever that may be — or lasers, we want to have a platform to land it on,” Pyle said.

The new Standard Missile-6, or SM-6, which can do anti-air defense, ballistic missile defense and anti-surface warfare, is being integrated onto Navy ships now, Okano said.

“The so what behind DDG(X) is that capability to deliver larger missile launchers, so we can have a stick that beats that of our adversaries. I think that’s a key element,” Pyle said.

Pyle also mentioned hypersonic missiles as another weapon the DDG(X) could host. The Navy is currently developing the Conventional Prompt Strike weapon, which would travel at speeds higher than Mach 5 and be maneuverable.

Service officials have stated that they want the new weapon to be ready by 2028, a few years before the DDG(X) is fielded. They have tapped Zumwalt-class destroyers and Virginia-class submarines as the first destinations for the hypersonic technology.

Re: Navy Moves Out on DDG(X) Requirements

I think the Navy determined the ZUMWALT experiment didn't pan out as they hoped it would. As Excam's post pointed out, the DDG(X) is a more versatile ship with more room to maneuver and places to put new weapons, etc. The ZUMWALT did not turn out to be the panacea they had hoped.

EOD SWO at 1:12 PM
Re: Navy Moves Out on DDG(X) Requirements

In response to Term Limits' post, the Zumwalt-class lacks certain features found in the DDG(X) such as a plug-in center module, SPY-6 radars, CIWS, an extensive VLS bank, 5-inch gun, and so on. Zumwalt has a RHIB launch ramp that the DDG(X) doesn't have and its superstructure is more stealthy. Furthermore, its helicopter pad is larger than the DDG(X) and the CIC is different with an overhang conference room and banks of tables and monitors. I doubt that the Zumwalts have extra space for accommodation of new rooms, systems, sensors, and VLS unlike the DDG(X) plug-in module. The DDG(X) superstructure allows for new future sensors, lasers, and radars to be installed and has flat exterior spaces for installation of sensors whereas the Zumwalts have no bridge wings. Term Limits is comparing apples to oranges as the two destroyer designs are different and serve different purposes. The Zumwalts were meant for land-attack shore bombardment (didn't work as the 155mm AGSs had no shells) and now are optimized for Surface Strike with hypersonic missiles and VLS. The DDG(X) will be for AAW, ASW, ASuW, and BMD---more multirole than the Zumwalts.

Just double the missile magazines and create a super-cruiser instead. plus, upgrade the forward laser to 600 kilowatts

icee bear hawaii at 9:40 PM
Re: Navy Moves Out on DDG(X) Requirements

BTW, move the rear lasers to the top of the structure to provide better overall coverage of the ship, duh!

icee bear hawaii at 9:49 PM
Re: Navy Moves Out on DDG(X) Requirements

After spending BILLIONS in development of their next generation destroyer, the Zumwalt class, why has the Navy gone through yet another exercise to spend more BILLIONS to develope another destroyer to replace the Burke's? The Zumwalt has been lauded by each captain who has commanded them and it supposedly was designed for the future, with additional power generation, missile tubes, etc, etc.
Do we just sit back and say "thanks for blowing 5 billion or so and flushing it down the toilet"? As a result of the R&D costs spread over only 3 hulls, of course the per ship cost was huge and over budget! So why not build more to spread the costs and guess what? Doing so would bring the build costs DOWN, as the shipyards become more efficient with the design, such as has been SO successful with the Burke class.
Has there been a complete turnover at the Navy from when the Zumwalt class was designed? Obviosly there is a completely different mindest, occuring in just what, a decade? This appears to be yet another example by the government mentality of wanting a new "toy" rather than improving what was harkened and sold as THEE destroyer to take the US through the century.
Please anyone, have you information that says clearly why they didn't simply improve the Zumwant as needed, as is what is normally done with a new ship?