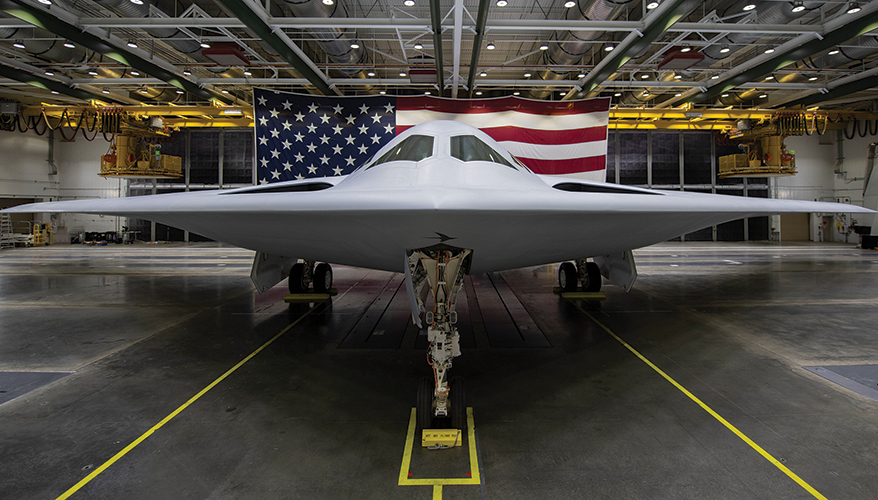 The Air Force’s B-21 Raider is designed to prevail against robust air defenses, deliver precision weapons on targets deep in enemy territory and return its two-man crew safely home.

But a bigger challenge as the program moves forward is whether the program can prevail in the yearly Defense Department battles over funding, keep its costs down and deliver the 100 aircraft the Air Force says it needs to maintain its edge over adversaries.

Air Force and Northrop Grumman officials at the B-21 roll-out ceremony in Palmdale, California, gave an upbeat assessment of not only the program’s current costs, but how much funding it will require in the future.

Andrew Hunter, Air Force undersecretary for acquisition, technology and logistics, told reporters that so far, the program is “tracking well” on cost and schedule.

“One of the key aspects of this program is that we had a very firm cost target. That is a requirement for the program. And that will support our ability to deliver the number of aircraft we need to truly perform the missions that are outlined in the National Defense Strategy,” he said.

The program kicked off 12 years ago with a requirement for 100 aircraft at a cost of $550 million each in 2010 dollars. Officials say the current per-aircraft cost is classified, but with a cumulative rate of inflation of 36.7 percent, that comes to $751 million per aircraft in 2022 dollars.

Maintaining steady numbers is critical to the Air Force as it divvies up funding for its own needs and engages in the yearly food fight with the Navy, Army and Marine Corps for finite taxpayer dollars to fund their priorities.

And there will be many budget battles in the coming years that will put pressure on the B-21 program.

Jet fighters have their own advocates within the Air Force, which is trying to build out its F-35A Lightning II, field the F-15EX, maintain its legacy fleets and develop a sixth-generation Next Generation Air Dominance fighter.

Bombers are part of the nuclear triad along with submarines and intercontinental ballistic missiles.

All three are being modernized and replaced with completely new systems over the next decade, with the Air Force in charge of the Ground-Based Nuclear Deterrent ICBMs as well as upgrading the nuclear command and control infrastructure that ties the triad together. The Navy is building 12 Columbia-class ballistic missile submarines.

Meanwhile, the Navy’s ultimate goal is to operate as many as 372 ships, the Army has a big modernization push and the Marines are retooling for 21st century conflicts in the Indo-Pacific.

In short, the B-21 Raider will have a lot of competition for Defense Department dollars over the next decade.

And cutting the 100 number is no solution, as retired Air Force Col. Chris “Jekyll” Brunner, senior resident fellow for airpower studies at the Mitchell Institute for Aerospace Studies, succinctly put it in a recent podcast.

The B-2 Spirit stealth bomber, which Northrop Grumman also developed and manufactured, shows how the Air Force ended up with a $2 billion apiece aircraft, he said.

The service was supposed to acquire 132 B-2s, but out-of-control costs and the end of the Cold War prompted Congress to cut their numbers.

That put the program in a death spiral.

Brunner said cutting aircraft numbers is counter-intuitive. “It increases the cost of the aircraft because you don’t have a large enough fleet to spread costs over, so it makes it incredibly hard to modernize and sustain, driving up bills. And that’s how you get a $2 billion airplane,” he said.

That’s the predicament the F-35A jet fighter program finds itself in today as the Air Force wants to acquire about 72 A-models per year, but falls short, he noted.

“You’re going to drive up sustainment costs over the long run because you’re not buying the fleet size that you intended,” he said.

The Air Force had to settle for 21 B-2s — and after one of them crashed — now 20. They are being modernized, returning to the factory to be refurbished and updated every nine years.

But what of the Sprit’s eventual fate? If history is any guide, the Air Force will eventually build enough B-21s to the point where it will want to retire the B-2 and probably its predecessors, the B-1 Lancer and B-52 Stratofortress.

But Congress won’t allow it — finding some way to rationalize their existence — sticking the Air Force with ever-higher bills to sustain aging aircraft in the name of keeping jobs in their districts.

Re: The B-21 Raider’s Critical Numbers Game

Every time a new high tech warplane is introduced, their numbers are less than the planes they replaced. Part of the problem is the initial higher of the new aircraft. The new planes also require more maintenance, which is also costly. Those who argue that the new planes are far superior to the replaced planes are right, however, we need to keep in mind that quantity is quality in war. We also need to keep in mind that more maintenance means more ground time and these high tech planes lose their technical advantage when sitting on the ground. Planes of less quality can destroy them while being maintained. Compared to the Cold War America's bomber fleet is almost nonexistent.