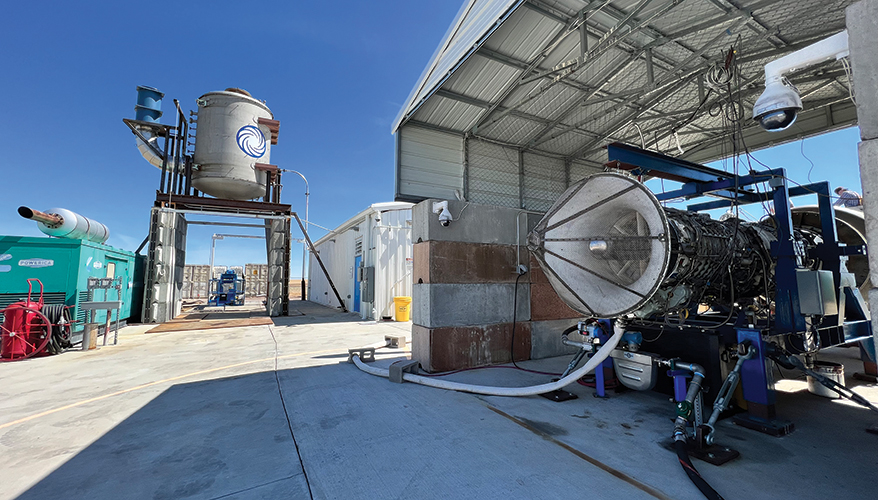 ARLINGTON, Virginia — The Air Force is partnering with a U.K.-based aerospace company to test the limits of hypersonic-capable engines.

Reaction Engines and the Air Force Research Laboratory tested technology to simplify and improve the performance of high-Mach engines, the company announced recently. The tests were made possible through the Defense Department’s Foreign Comparative Testing Program.

Tests focused on Reaction Engines’ thermal management technology developed for the company’s Synergetic Air Breathing Rocket Engine, or SABRE, and how it can be adapted to other propulsion uses, said Reaction Engines President Adam Dissel.

SABRE uses oxygen in the atmosphere to burn fuel. The engine can enable flight at hypersonic speeds — defined as Mach 5 or higher — partly because of a pre-cooling thermal wrapper on the front, Dissel said.

“That device actually takes the air that’s coming in the front of the engine and quenches it,” he explained. “It takes it from literally air as hot as lava, 1,800 Fahrenheit, and drops it down to whatever temperature you want … so the engine can be used without melting.”

SABRE is then able to extract the energy created from the large heat exchange and use it to further power the engine’s propulsion, he added.

The tests at Reaction Engines’ TF2 high temperature test site at the Colorado Air and Space Port required the company to triple the amount of air flowing through the engine to simulate conditions of high-Mach flights, which in turn creates even more energy to be used by the engine, he said. The technology could be used for both high-Mach flight and ground applications, he added.

Reaction Engines partnered with the Defense Advanced Research Projects Agency in 2017 to prove the pre-cooler’s viability on the ground. With the new AFRL program, the company is testing whether it can use the pre-cooler to make other engines capable of high-Mach flight, Dissel said.

“The thing we would really like to see … is if we could marry our thermal technology up with a jet engine,” he said. “Could we end up with a faster jet engine without having to redesign the whole jet engine?”

@James Robinson
An oxygen oxymoron? Neat alliteration, but your rocket engine “by definition” is a solid - and solids are great, but they’re short duration and once lit you can’t switch ‘em off. This technology has the potential to deliver controllable and sustained high Mach propulsion, whether by using the British developed cooling system (described in the article) to enable existing jet engine technology (also a British pre-WWII invention) to fly faster without the jet engine melting, or as the first component stage of the jet-rocket hybrid SABRE engine for single stage runway to low orbit launch and return (or other applications)
@Vicious Fish
Did you “get really stupid”? Well, if you confuse “the Chinese and Russians” with the UK/Britain where this technology has been invented and developed perhaps only you can answer your question.
An

Jay at 7:56 AM
Re: Air Force Testing High-Mach Engine Technology

This is an interesting read, regarding the jet engine.

The pre cooler that is talked about here, is just one (very important part) of the overall design, which is to allow the reaction engine, to work as a jet engine at lower altitudes, then morph into a rocket engine. It would carry oxygen , but would need a lot less, since it's far higher. This project has been going 30 years now.

Obviously the precooler, which has been validated, is a very exciting piece of kit.

NeilM at 11:22 AM
Re: Air Force Testing High-Mach Engine Technology

Well did we lose everything on hypersonic speed learned from the X-15 project in the 50s and 60s and get really stupid. I mean those guys topped out at Mach 6.7 in manned flight. And now here we are having to relearn all that stuff and being behind the Chinese and Russians in this technology. I mean really.

so jay you are saying that we have been sitting on our butts forgetting everything we learned with the 50s and 60s hypersonic program and let everyone else take the lead? That is what I call getting stupid. We should be light years ahead of everyone else. BTW I thouth it was the Germans who developed jet engine technology