BREAKING: B-21 Bomber to Make Public Debut in December 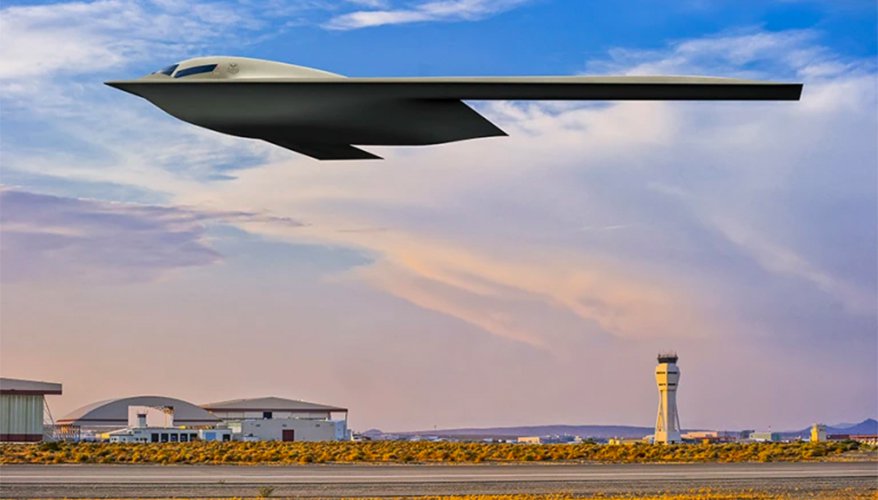 NATIONAL HARBOR, Maryland — The Air Force will unveil the first B-21 Raider in December, giving the public the its first look of the highly classified next-generation bomber.

Andrew Hunter, assistant secretary of the Air Force for acquisition, technology and logistics, announced the bomber’s debut Sept. 20 during a roundtable with reporters at the Air and Space Force Association’s annual conference in National Harbor, Maryland.

The exact date of the B-21’s roll out is not yet set in stone, and the Air Force is “still working to nail down all the plans,” Hunter said. “But it will be the first week of December.”

Although the B-21 Raider’s development and production timeline has largely been kept behind closed doors, it is listed as one of Secretary of the Air Force Frank Kendall’s seven operational imperatives. Kendall released the initiatives as roadmaps to guide the service’s modernization efforts.

The Air Force developed the B-21 bomber to replace its aging fleet of B-1 and B-2 bombers. It hopes to eventually obtain a minimum of 100 Raiders, with a goal of some to enter the service by the mid-2020s. Its first flight is scheduled for next year, according to the service.

Northrop Grumman is under contract to build the new bomber at its plant in Palmdale, California. The service previously announced that it had six of the stealth bombers under production in February. In its budget request for fiscal year 2023, the Air Force asked for $1.7 billion for procurement and continued development and $381 million for engineering, manufacturing and design initiatives.

The B-21 Raider unveiling will be a historic moment, providing an exclusive view of the B-21 aircraft, a Northrop Grumman statement said.

“The B-21 is the most advanced military aircraft ever built and is a product of pioneering innovation and technological excellence,” said Doug Young, sector vice president and general manager, Northrop Grumman Aeronautics Systems. “The Raider showcases the dedication and skills of the thousands of people working every day to deliver this aircraft.”

Northrop Grumman and the Air Force confirmed in May that the B-21 first flight is projected for 2023. The actual timing of first flight will be based on ground test outcomes, the statement said.

The unveiling will take place at Northrop Grumman’s Palmdale site, during an invitation-only event, the statement added.

The first week if December is also the Reagan Defense Forum, held in Simi Valley, California, near the Palmdale facility. Senior defense leaders attend the forum every year.

Maj. Gen. Jason Armagost, director of strategic plans, programs and requirements at Global Strike Command, said the demand for bombers across combatant commands is increasing beyond the fleet’s capacity.

“The demand across the COCOMs whether they're regional or global, is ubiquitous and unending and … beyond the capacity we currently have,” he said.

It will be challenging to decrease the risk for the B-21 as it comes online while transitioning from legacy systems, he said.

“We've had to figure out how we're going to do this in transition, and with legacy platforms, and how can we bring down risk for the B-21, but simultaneously increase our capacity and our ability to get into that denied airspace,” he said.

Melissa Johnson, acting director of the Air Force Rapid Capabilities Office, said the close collaboration with Northrop Grumman has helped keep the Raider program “on cost and schedule,” she said.

“Our teams spend so much time at the industry plant that sometimes it is hard to tell who is government who is industry,” she said.

“We all get really fixated on developing whatever weapon system and being able to deliver that, but if you don't bake in the sustainment, the depot planning and how you would have not only sustained operations, but also lifecycle affordability … everything else on the front end will start to devolve,” she said.

She added that the office is considering how it could ramp up production if needed.

“When we look at the provisions that we've put into the program, I think we can always look at that, but you want to kind of get this on a solid foundation.”

Because of open systems architecture, it could be easier to modify the systems if requirements change, she said.

Tom Jones, corporate vice president and president at Northrop Grumman Aeronautics Systems, noted that the focus is on making the bomber “a daily flyer.” Members of Global Strike Command and maintainers have been working alongside Northrop Grumman employees for “over a year.”

“We've had a real focus on maintenance right from the start,” he said.

Northrop Grumman’s engineers also took lessons learned from the B-2 bombers that the fleet will replace and addressed the difficulty of maintaining stealth types of platforms, he said.

“[We] went out and looked at the major drivers on the B-2 and right from the start and designed to address those to make sure that we can, once again, live up to that ambition of being the daily flyer,” he said.

Re: B-21 Bomber to Make Public Debut in December

100 B-21 bombers, if all built, would actually be a "first" and put many areas of the globe at risk of strategic stealth attack. Can the USAF buy and build 100 or more B-21s?

In a time and world where countries might be so quick to go to war, having 100 stealthy high-tech B-21s at the ready to launch, fly, and attack would aid in deterrence, but only if the numbers can be produced and the logistics and hangars maintained to have a bomber force of that size, not including the B-52s.