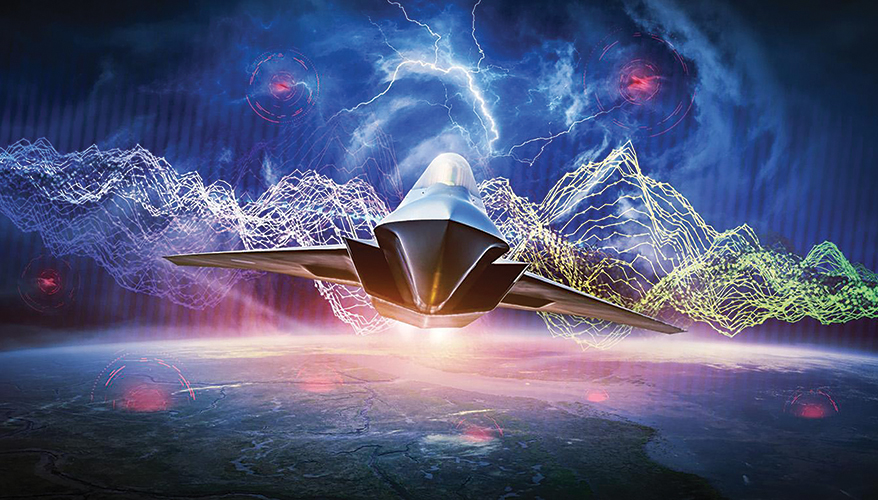 FARNBOROUGH, United Kingdom — The announcement of the Tempest jet fighter program took Europe by storm at the last Farnborough Air Show four years ago. Now, the program has its sights set on a new demonstrator and international partnerships that officials hope will make the fleet ready for future fights.

The U.K. Ministry of Defence announced at this year’s airshow that the next-generation flight demonstrator for the Tempest Future Combat Air System, or FCAS, will fly in 2027. Defense companies also revealed more details on what technologies they’re building and testing for the final product.

The program envisions a sixth-generation fighter jet that could operate crewed or uncrewed and control several smaller drones known as swarms. The demonstrator aims to test new technologies that could be included on the eventual fighter jet, including the integration of “stealth compatible features,” according to the Ministry of Defence.

In addition to testing technologies, the supersonic demonstrator will showcase and test skills, tools, processes and techniques developers will use to get the next-gen jet off the runway by 2035.

In addition to the new demonstrator, U.K. officials used the air show to tout a new partnership with Japan. Japan’s F-X fighter jet program — led by Mitsubishi Heavy Industries — will share and learn alongside the Tempest fighter jet to optimize both programs.

Richard Berthon, the Ministry of Defence’s director for future combat air, said it’s been 120 years since the armed forces have signed a cooperation treaty with Japan.

The extent of Japanese collaboration is still undecided, he said. Nevertheless, the working relationship is on track, he said.

“I think that the extent of the alignment we’ve found with the military on the engineering side is fantastic. We feel a real sense of shared mission with shared values and shared opportunity, and it’s very exciting,” Berthon said.

U.K. Minister of Defence Ben Wallace touted the “cutting-edge” technology collaboration with Japan and European partner Italy as a standout benefit of the U.K. alliances around the world, he said in a statement.

The United Kingdom had kicked off Tempest development about the same time that Japan announced its F-X stealth fighter so cooperation seemed like a “natural partnership,” said Dan Darling, senior Europe and Asia, Australia and Pacific Rim analyst at Forecast International.

“It just made a lot of sense to partner with them and share innovations,” he said.

It would be difficult for the United Kingdom to undertake a major fighter jet program without serious backing, he added. While the nation is a tier-one international partner on the F-35 fighter jet, it is challenging to build a sixth-generation fighter without having developed a fifth-generation aircraft, he explained.

The partnership could be a jumping off point for collaboration in other defense areas such as space, he added. Both countries have “very ambitious” space programs to leverage, he said.

“There’s always a bigger picture. It’s not just airplane to airplane,” he said.

Meanwhile, the past four years of Tempest’s development have been surprising, said Colin Wills, the capability manager for major air programs at Leonardo U.K. The former fighter pilot said he was “a bit skeptical” when he first signed on to the program that asked industry to closely collaborate with each other — companies such as BAE Systems, Rolls-Royce and MBDA Missile Systems — and the Ministry of Defence.

“Whereas in the olden days, it was the other way around. [Ministry of Defence] would say to industry, ‘This is what we want, now go away and make it,’” he said on the sidelines of the airshow.

But the new immersive approach works, he said.

“We’re working really well as ‘Team Tempest’ as the key four members at the concepting and the operational analysis level, and higher than that as well,” he said.

Wills said one way the team is collaborating is through digital technology. For example, the companies working on the demonstrator — led by BAE Systems at its facility in northern England — will use synthetic modeling and model-based systems engineering, according to the company.

Wills said these kinds of digital systems have enabled engineers and project leaders to design the prototypes for the fighter jet program faster than in previous programs.

“We can do it together because of the ability to communicate through secure video conferencing around the country,” he said. “So, if we need to change an idea quickly, it can be done quickly.”

While Leonardo U.K. is working on the aircraft demonstrator, the company is also hard at work on its technology for the flight test bed, Wills said.

One of the stealth compatible features Leonardo is developing for the Tempest program is the multifunction radio frequency system, a sensor suite radar. The company’s main effort will be connecting the integrated sensing and non-kinetic effects onto the flight test bed aircraft, a Boeing 757 Excalibur.

“It’s more capable than your standard, traditional radar,” he said. “But the detail on what that offers will be what we can’t talk about.”

The sensors will likely be placed into the nose of the aircraft, but could be added to other parts of the airframe. Their final location is undecided because there is still ongoing analysis for the concept, including analysis in collaboration with Italy and Japan.

“The final decision will be at some stage in the next few years on … this is what we want as a country or a consortium, this is how big it will be, this will be the shape of it. It will also be the types of sensors, size of the sensors that we’ll have,” he said.

In addition to the multifunction radio system, Leonardo will also provide electronic warfare attack, support and protection capabilities. The aircraft will carry protection against infrared threats as well.

Russia has notably used electronic warfare in the military operations following its invasion of Ukraine.

All these sensors currently operate on the fifth generation of stealth fighters, including the F-35, Wills noted. Where Leonardo’s new sensor suite jumps to the next generation is through its sensor processing system, he said.

Wills described it as a “multifunction processing system computer with a digital backbone.” The aim is to declutter all the information coming from sensors to reduce strain on the pilot, he explained.

Not all the sensor data will have the same accuracy. For example, Leonardo’s system will be able to detect and block falsified information caused by an enemy’s jammer and instead present the most accurate picture. It will do this by automatically turning off the sensors that the adversary is targeting.

“At the moment, that’s all done by the human brain, and that’s quite tricky in that fog of war,” Wills said.

Leonardo’s use of open systems architecture for the Tempest technology is crucial to the development process and taking it to the sixth generation.

“So if we need to improve the algorithms, it will be much easier to do it with an open system architecture,” he said.

At the end of the day, the final design of the capability comes down to preparing for warfare in a contested environment, he said.

“You need to know what the potential adversaries’ capabilities are,” he said. “And then, through operational analysis, through wargaming, through synthetic environment trials, then do analysis on, ‘If we have a system that has this capability, how does it fare against that?’”

How Leonardo’s headquarters in Italy will be involved on the project hasn’t been completely worked out, he added. “It doesn’t mean that Leonardo Italy will not get involved … but that’s an ongoing development,” he said.

While Leonardo handles sensors, the U.K. branch of MBDA Missile Systems is contributing its own weapons effects management system.

The battlespace is growing more complex given the expansion of crewed and uncrewed teaming and the heavy use of uncrewed aerial vehicles in the modern battle space, said Angus Penrice, MBDA’s chief engineer for the fighter jet program.

MBDA’s management system uses machine learning and artificial intelligence to make a complicated environment easier to understand, he said. The ML- and AI-based software will be able to identify a threat — with the help of Leonardo’s sensors — and tell the pilot which weapon would be the best to employ, Penrice said on the sidelines of the air show.

Because the program is still in the planning and design phase, it’s too early to “be specific about options for hardware” related to the weapons management system, he said.

Rolls-Royce unveiled a new engine called Orpheus that will be part of the flight demonstrator. Tom Bell, CEO of Rolls-Royce North America, touted the engine’s prototype during a panel on the future of green technology in defense. The gas-turbine engine prototype was put together and evaluated in 18 months, he said.

“That’s the kind of stuff we do when we challenge ourselves to think differently about problems and say, ‘Unlock the innovation. Just do it,’” he said.

Beyond the capabilities being developed by the Tempest collaborators, the Ministry of Defence is also exploring adding capabilities from another tech collaboration called Team Pellonia, which is developing next-generation air survivability.

The capabilities that defend aircraft against high-level threats will be able to go across many different types of air platforms, potentially including the next-gen fighter program, said Air Vice-Marshal Lincoln Taylor, chief of staff for capability.

The program will use a spiral approach to integrate technologies from Leonardo U.K, France-based Thales and U.K.-based Chemring Countermeasures into different air frames as early as 2023, he said.

“The survivability systems will bring in mission data for information functions, the information that goes behind the list,” he said. That allows common programming across ranks, he said.