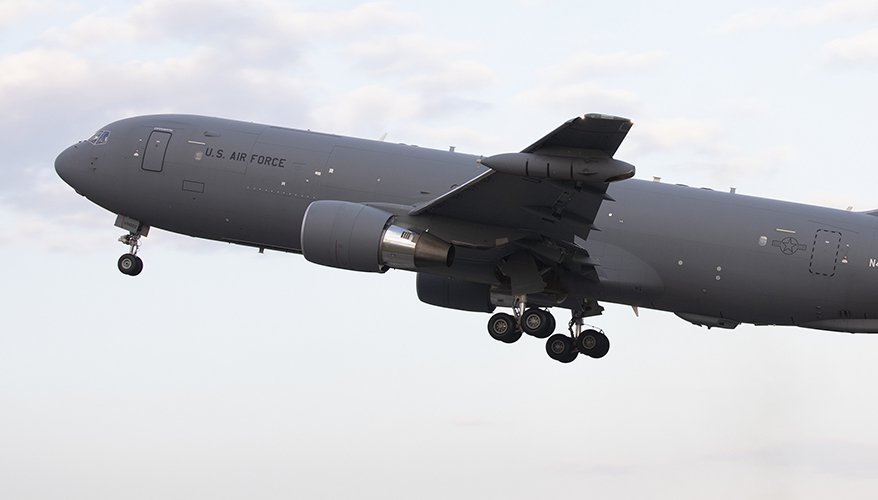 The Air Force’s KC-46 Pegasus is now cleared for worldwide missions — including in combat — despite the platform’s shortcomings, said the head of Air Mobility Command Sept. 19.

Gen. Mike Minihan announced the Air Force has devised sufficient tactics, techniques and procedures to work around the issues with the remote vision system — a network of cameras and sensors on the tanker that helps pilots connect the rigid refueling boom to the receiving aircraft. The new system has caused numerous delays to the program.

In a testy exchange with a reporter who criticized the decision to deploy the KC-46, Minihan said the aircraft is “the most capable in my inventory right now,” and the Air Force needs the refueling capability to be competitive in a conflict. The Pegasus is replacing some of the KC-135 fleet, a tanker that was first deployed in the 1960s.

“I've got 60 of them. My job is to win tomorrow,” he said during a media roundtable at the Air and Space Forces Association annual Air, Space and Cyber conference.

He said he would keep pressure on KC-46's manufacturer Boeing. The aerospace company agreed to fix the system on its own dime, but the updated system won’t be ready until 2023.

“I am extremely straightforward with Boeing in my concerns about quality, timelines and cost,” Minihan said. “But if I can put an incredibly capable tanker in the fight, then why wouldn't I?”

The platform was cleared after it completed its first operationally-tasked mission in a combat zone during an exercise in the Central Command area of operations. The tanker refueled two F-15E Strike Eagles, according to a press release.

Minihan said deploying the KC-46 is central to achieving mobility command’s mission. While he said the limitations of the KC-46 platform are “not OK,” he would not comment on accountability measures for Boeing specifically, bristling at a reporter's suggestion that he was letting the contractor off the hook.

“I'm not going to get out of my lane when it comes to acquisition authority and playing chicken on semantics and and interactions at the high level,” he said. “I would not — for one second — play politics with the defense industry when it comes to the mission of my command or the lives of the Americans I support.”

While there are “no restrictions” on the conditions the KC-46 can fly in, he said pilots are trained on how to refuel in different scenarios that impact the remote vision system’s operations.

“There are sun angles and certain weather phenomenon that challenge the [remote vision system], so when we know that's going to occur, we line up the angles differently,” he said.

Minihan said he is “confident” that the second iteration of the vision system will take care of those issues.

Beyond issues with the vision system, the crew of the KC-46 has had to work around malfunctions of its cargo software, he noted. The platform can carry cargo, but it will have to do it more manually “than we like to,” Minihan said.

“The cargo is a leftover that we'll be addressing after the [interim capability release] process as well,” he said.

Operating the KC-46 contested environments will require a new level of connectivity, added Minihan. Air Mobility Command needs to use capabilities such as Link-16 or joint all-domain command and control-related technologies.

“We need to ensure the mobility fleet, both tanker and lift, have those as well so that we're connected and don't have to ... rely on refueling architectures that won't win in the Pacific,” he said.

Later, Air Force Secretary Frank Kendall expressed his confidence in the Pegasus. "We're going to get it to work," he told reporters. Some 97 percent of the requirements have been met and he has flown aboard one of the aircraft and it is a big improvement over the legacy tankers. But he admitted that it "has been a very painful experience."

"The remote vision system was more difficult or more challenging than I realized. And Boeing has struggled, to be honest. They have not performed to where they should have and they paid a big price for that. And they lost a lot of money on the program," he said.