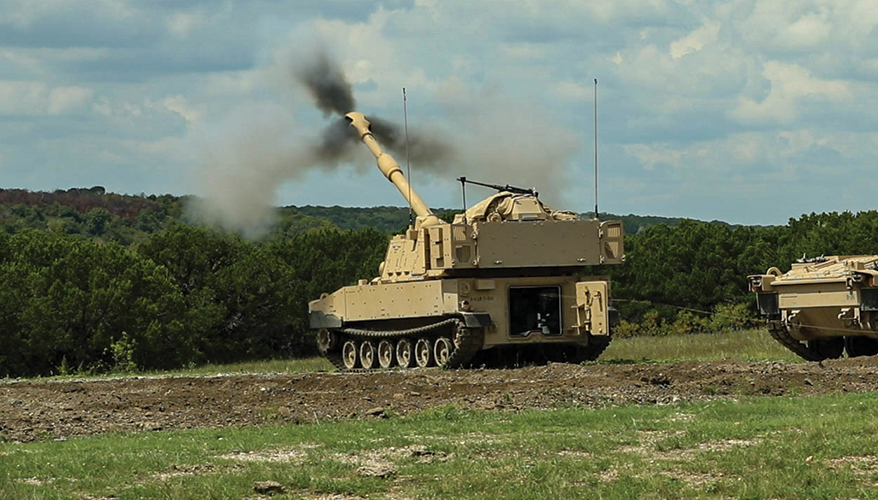 For centuries, artillery was called the king of battle, and great commanders relied on masses of cannons to dominate the battlefield.

But then came the invention of the airplane. Since 1945, “flying artillery” has replaced big guns as the favored source of fire, especially in advanced Western-style militaries such as those of the United States, NATO nations and Israel. Mobile, long-range and glamorous, aircraft were seen as a high-tech, low-manpower instrument for delivering precision strikes in conflicts such as Vietnam, Sinai and Desert Storm.

But the Ukraine war has been different. Airpower has played a relatively limited role, while artillery has emerged as the dominant weapon.

For both sides, how to employ — or destroy — those howitzers and multiple rocket launchers has become a priority.

Ukraine may offer a glimpse into the future of artillery. As Russia’s erstwhile blitzkrieg fizzled into trench warfare, the conflict has become the infantry’s nightmare but the gunner’s laboratory. On display in Ukraine is the full panoply of modern artillery: a bewildering array of towed howitzers, truck-mounted cannons, self-propelled armored guns and multiple rocket launchers manufactured by numerous nations.

At the least, it suggests that cannons are back with a bang.

There are local reasons why airpower has not been a major factor in Ukraine, such as the small number of Ukrainian aircraft or the timidity of the Russian Air Force. Despite initial successes, even attack drones have become less effective.

But in an era of high-performance air-defense systems, airpower may have less freedom to operate in contested skies such as Eastern Europe or Taiwan. At the same time, highly expensive aircraft and limited stockpiles of smart munitions may be allocated to distant targets in the enemy flank, rather than close-air support.

While less flexible than aircraft, artillery does offer firepower 24/7 under any weather conditions and without relying on airbases vulnerable to bombardment.

The Russo-Ukraine War also highlights the importance of range. With its pre-war Soviet-era artillery being pummeled by Russian counterbattery fire, Ukraine quickly clamored for longer-range Western artillery and rockets. Delivery of U.S. and NATO 155mm and 105mm howitzers — and especially M142 High-Mobility Artillery Rocket System, or HIMARS, multiple rocket launchers, which can shoot GPS-guided projectiles out to 50 miles — has enabled Ukraine to conduct devastating strikes against Russian ammunition dumps, command posts and key bridges and do so without suffering crippling losses to counterfire.

“Range has proven very important as a factor in force protection as much as the ability to strike the enemy deep,” Reynolds said.

This should especially interest the U.S. Army, whose artillery had atrophied after nearly two decades of focus on counterinsurgency warfare.

Compared with weapons such as Russia’s BM-30 Smerch multiple rocket launcher — with a range of around 45 miles — the U.S. M109A7 Paladin 155mm self-propelled howitzer only has a range of around 15 miles with conventional shells, and 20 miles with rocket-assisted projectiles. The Army is belatedly trying to catch up with its Extended Range Cannon Artillery, an upgraded Paladin with an autoloader and, perhaps more importantly, rocket-assisted projectiles such as the XM1210, which has successfully hit test targets at 43 miles.

Another issue highlighted by the Ukraine war is mobility. Historically, the problem for artillery was keeping pace on the battlefield with the infantry, cavalry and tanks. But in Ukraine, mobility has become synonymous with survival. Drones and counter-battery radar, which can instantly pinpoint artillery as it fires, have made shoot-and-scoot tactics a necessity.

Ukrainian glee at receiving U.S. M777 105mm howitzers was tempered by the realization that they are towed rather than self-propelled weapons, which can take three or more minutes to displace after firing. To some extent, that vulnerability has been muted in Ukraine. Because

Ukrainian and Russian kill chains are slow, “systems such as towed artillery remain potent and viable despite being hypothesized as too vulnerable to counter-battery fire in high-end warfighting,” Reynolds said.

But kill chains will only grow faster as nations develop tighter command systems, such as the U.S. military’s joint all-domain command and control, or JADC2, concept.

David Johnson, a former U.S. artillery officer and now a principal researcher for RAND Corp., believes mobility is an incentive for future artillery to be self-propelled. Towed guns have the advantage of being simpler than a tank-like weapon such as the Paladin, which tasks the crew with not just firing the cannon, but also all the strenuous maintenance of a heavy armored vehicle.

Towed guns “are a lot easier to train people on,” Johnson said. “They’re a lot more durable as far as being moved around a lot, and there are fewer maintenance requirements for a howitzer towed behind a truck, especially if you have long distances to cover.”

Towed guns are fine against a poorly armed or trained opponent, Johnson said. But an enemy with advanced skills and weapons is a different matter.

“Towed systems take longer to displace,” he said. “If you’re fighting a competent adversary who really knows how to do cannon fire, you shoot and then you move because they’re going to shoot where you were. If you’re not moving quick enough, you’ll get caught in the counterfire.”

Johnson is intrigued by truck-mounted weapons, especially France’s Caesar, which is a 155mm howitzer mounted on a six-wheeled truck.

China also uses wheeled artillery, including the new PCL-181 155-mm gun. Wheeled guns have the firepower and mobility of an armored self-propelled howitzer, without the weight and maintenance issues.

“It’s the best of both worlds in some ways,” Johnson said. “The only challenge is that wheeled vehicles don’t have much off-road mobility.”

Nonetheless, Johnson still prefers armored self-propelled howitzers. The ability of tracked vehicles to maneuver in rough or muddy terrain is useful, as is the armor protection.

“For a high-intensity conflict in Europe, I’d rather have an armored system like a Paladin or a German PzH 2000,” he said. “You can’t always assume you’re going to be fighting against incompetent adversaries.” The fact that Extended Range Cannon Artillery is a beefed-up Paladin indicates that the Army will continue to rely on heavy-armored howitzers.

The Ukraine war also demonstrates that artillery is not just a big gun, but an entire ecosystem of weapons, sensors and networks. For example, both Ukraine and Russia employ drones to locate each other’s artillery, a technique that “has proven vastly superior to other targeting capabilities such as radar or acoustic detection,” Reynolds said. But they don’t function in a vacuum. “Without electronic detection and counterbattery radar providing general direction-finding capability, [unmanned aerial vehicles] cannot be directed to hunt the right areas for enemy artillery.”

Indeed, drones may be the key enabler for armies with limited capabilities for directing artillery. In Ukraine, “both sides seem to underutilize forward observers compared to what more capable NATO militaries would employ, probably as a result of poor communications systems and skill limitations,” Reynolds said. He also believes that shells and rockets deserve attention.

“Lethality and destructive power of munitions is also proving to be very important, given the prevalence of mechanized forces, dug-in defensive fortifications and the need to be able to destroy targets such as large ammunition depots,” he said.

The Ukraine war also points to what seems to be a growing convergence between howitzers and rocket launchers. World War II-style MLRS like the Katyusha fired huge salvoes of unguided rockets that were notoriously inaccurate but could devastate a target through sheer weight of high explosive. Today’s rocket launchers, such as HIMARS, fire just a few guided rockets accurate enough to destroy a pinpoint target like a bridge, with accuracy similar to that of howitzers. Conversely, new howitzers like ERCA are designed to fire long-range projectiles that are a cross between a rocket and a traditional artillery shell.

Johnson sees the perfect artillery weapon as having a high rate of fire, high mobility, some degree of armored protection and the ability to quickly process targeting data. Therein lies the classic dilemma — familiar to designers of tanks and battleships — of how to balance firepower, protection and mobility. New technologies such as robotics, electric-powered vehicles and longer-range shells and rockets may tweak the variables somewhat. But the dilemma will remain.

All of which suggests that the future of artillery will include armored and wheeled guns as well as towed weapons for austere theaters or for armies needing simpler weapons.

“There is going to be a mix of artillery,” Johnson said. “What really matters is how you employ them.”

Michael Peck is a freelance journalist.

Re: ANALYSIS: Ukraine War Proves Big Guns Are Back

As a former Seargent Ranging Technical Specialist in the IDF, for a battery of M107A1 self propelled 155 mm Howitzers, we already could fire with 50 meter readius accuracy or even better, if meteriological air current data was provided. And this was done using coordinates from a military terrain map, a compas and an Artillery Circle to set the Azimuth optically with the cannons.
Self propelled Howitzers, when managed properly are very effective.
The current models (I see we're up to model A7) can target by themselves using onboard GPS, etc.
Isreal has been using cannons continuously and effectively in wars and in Border clashes.

Ami at 12:05 PM
Re: ANALYSIS: Ukraine War Proves Big Guns Are Back

NATO member states spend well over $1 Trillion annually on defense. The poor Russians, on the other hand, spends far less than $70 Billion annually on defense. The United States and NATO have provided extensive funding for the Ukrainian government and their Ministry of Defense since the 2014 coup-de-tat. The NATO alliance is the most powerful military alliance on Earth. No single nation state nor any combination of nation states can match NATO combat capabilities. The on-going conflict in the Ukraine proves that the United States, European Union, the Ukraine, and the NATO Alliance hold overwhelming militarty superiority over the Russian Federation. The Russians can't possibly defend themselves against NATO. When the Russian Federation collapses, the current instability in Eastern Europe may spread to Central Asia. However, the collapse of the Russian Federation will prove the European Union and NATO complete economic control of the European Continent from the Atlantic seaboard to the Ural Mountains. The United States, European Union, the Ukraine, and NATO will benefit from the ongoing combat in the Ukraine. However, the poor American taxpayers will have to pay for all this. The bill may very well be as expensive as the 20 year Afghan War.

David at 5:37 PM
Re: ANALYSIS: Ukraine War Proves Big Guns Are Back

This makes me wonder if the NLOS-Cannon and Crusader cancellations were a mistake. At 27 tons for the former and 40 tons for the latter, the internal autoloader would have kept the crew under armor and not needing to get out to reload. NLOS-C for the Airborne and Light Infantry would complement the 105mm MPF light tank coming into service and Crusader has the range and rate-of-fire that the M109A6 does not have.

Does the US Army ever resurrect any canceled projects? The 105mm M8 AGS is one, but it lost to the MPF Griffin II. It makes sense to have a new artillery system besides the M109 and the NLOS-C was tested to work even though it may have the range of the M777, it is light, mobile and self-propelled, and might be able to bring 155mm SPH back to the USMC and US Army Light Forces instead of the towed M777.