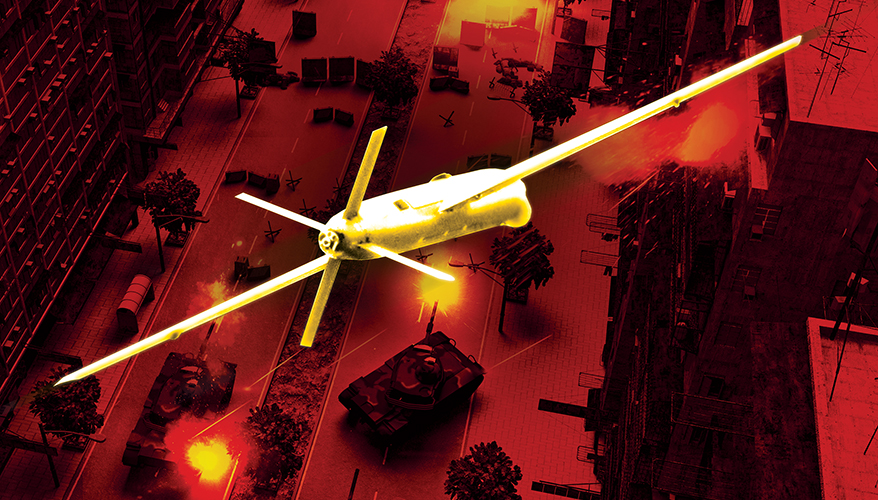 PARIS — If there was ever one-stop shopping for anything an army would need as far as loitering munitions, it was all the way back in Hall 6, aisle F at the Eurosatory trade show in Paris in June.

There, attendees found the Uvision booth and its complete lineup of so-called “kamikaze drones,” ranging in six sizes along with all the accessories, including controllers and training systems.

A quadcopter drone also hung on display from the booth’s ceiling.

“Is that a loitering munition, too?” a reporter asked a company representative, having never seen a vertical takeoff and landing drone armed with a warhead.

“No, just for surveillance,” said the representative.

“But it could be armed. It is possible, right?”

“Anything is possible,” he responded.

Whether they’re called loitering munitions or kamikaze drones, the weapon system has come into its own in recent conflicts, especially in Ukraine, where they were likely being deployed against Russian invaders the very week of the trade show.

Their origins are rooted in World War II tactics. Their basic technology was developed for hobbyists, and their evolution was spurred by terrorists’ use of improvised explosive bombs in Iraq.

National Defense spotted the first “non-improvised” flying munition created by an Eastern European contractor at the IDEX trade show in 2009.

More than a dozen years later, the technology is proliferating both at defense exhibitions and on battlefields. Vendors from all over the world came to Eurosatory to exhibit the latest in loitering munitions technology, which — as the name suggests — can fly in patterns serving as a reconnaissance platform until it spots a potential target. If an operator decides to attack, the drone can nosedive toward the target, striking it while detonating a warhead.

Yaniv Ben-Itzhak, director of marketing and business development at Elbit Systems, showed a video of one of its medium-sized SkyStriker drones slamming into a tactical wheeled vehicle at some 200 kilometers per hour, basically slicing it in half without the use of explosives.

“That was just a demonstration.” The warhead was removed for safety reasons, he explained.

The Israeli-based company is looking to create synergy between mobile rocket launchers and its SkyStriker loitering munitions, allowing operators to select one or the other and fire them from the same tube.

“In terms of firepower, you have a complete offering from the same platform,” he said. The SkyStriker has about a 400-kilometer range, he said. He touted its high-resolution target-seeker camera and the 5-kilogram warhead.

Like all loitering munitions, it has a dual purpose as a recon platform. It can relay target information back to the mobile platform if the operator wants to use a rocket instead. If no target is selected, it autonomously returns to its home base and parachutes to the ground for reuse.

Such tactics have been used in Ukraine against Russian combat vehicles, but military analysts truly took notice of the hybrid weapons during the Nagorno-Karabakh conflict between Armenia and Azerbaijan in September 2021, said Jorge De León Rivas, director of the robotics and autonomous systems department at Madrid-based defense contractor SDLE, which markets Uvision’s drone in Spain.

“The battlefield changed,” said Rivas, who is also a lieutenant colonel in the Spanish army’s reserves.

Azerbaijan effectively deployed loitering munitions, which destroyed hundreds of Armenian tanks. “That made the difference in the war,” said Rivas. The drones were made in Israel and Turkey, according to numerous news outlets reporting during the conflict.

For Rivas, the advantages of loitering munitions are obvious. A missile is “thrown away” the moment it is fired. Perhaps it hits its target, and perhaps there is collateral damage that could result in unnecessary deaths.

An operator using a loitering munition can be more selective and even abort a strike if he sees civilians at the last second.

“You only strike what is really needed, and you’re not just killing people for nothing,” he said.

The smaller versions are also said to be quiet and hard to detect by modern air defenses.

The U.S. Marine Corps, in Rivas’ estimation, is far ahead in developing tactics, techniques and procedures for loitering munitions.

U.S. forces — and now Ukraine — have been using AeroVironment’s Switchblade loitering munitions. At Eurosatory, the U.S. company marketed two models: the Switchblade 300, a 2.5-kilogram drone with 10-kilometer range and 15-minute endurance and the 54-kilogram 600-model, with a 40-plus kilometer range and 40-plus minutes of endurance. Both are launched from mortar-like tubes placed on the ground.

The MAM-T is a new 95-kilogram fixed wing drone that has a 30-plus kilometer range, he said. The MAM-C and MAM-L — both introduced in 2016 — have 8- and 15- kilometer ranges respectively.

Unlike the other tube-launched systems, Rocketsan’s three models are designed to be launched from medium-sized drones or light attack aircraft, he said.

One potential customer at Eurosatory said he was sold on loitering munitions’ utility.

Col. Arnaud Goujon, chief of plans at the French army headquarters, said the service is looking to add loitering munitions to its inventory later in the year.

If it can fly 30 or 50 kilometers away and endure for two to four hours, “then it’s a different animal,” he said.

Goujon indicated that the French army would start off by acquiring the smaller Switchblade.

Peter W. Singer, senior fellow at the New America think tank, and the author of several seminal books on robotics and warfare, said in the near future, the skies over battlefields — and at sea — will feature more drones than ever, including loitering munitions.

What do I want to launch from my aircraft? Is it just a singular guided munition or hundreds, or even thousands of loitering munitions?” he said in an interview.

“The future of the battlefield is not merely a few loitering munitions, but an airspace that’s literally filled with them,” he added.

Back at the Uvision booth, company chairman Yair Ramati, wasn’t shy about calling the technology a “battlefield game changer.”

Its series of six models ranges from the HERO-30, which weighs 7.8 kilograms with its cannister launcher and travels 15 kilometers, to the HERO-1250, which weighs 155 kilograms, is launched from a rail, and has a range of 200-plus kilometers.

The Tira, Israel-based firm has sold its models on almost all the continents, to NATO nations and to U.S. customers such as the Marine Corps, he said.

As for Ukraine, the technology is proving its worth every day, he said.

Attacks on Russian convoys serve as one example. Anti-tank missiles such as the Javelin have received about as much publicity as the Switchblade and other loitering munitions, but those require a soldier to approach within the line of sight, perhaps 3 to 5 kilometers away, he said.

A loitering munition is a good choice of weapons when a user knows there is a target out there he wants to strike, but doesn’t know the precise location, such as when he is receiving mortar or indirect fires. The seeker capability can find the target.

A more typical scenario is that intelligence knows there is a convoy somewhere on a road that extends 50 or 100 kilometers. The loitering munition can search and find it at a safe standoff distance.

“That is why there is a tremendous demand for these types of weapons right now,” he added.

Training is also an issue. It can’t take six to nine months to learn how to fly a medium-altitude, long-endurance unmanned aerial vehicle such as Predator.

Uvision seeks to train the basics of flying in a few hours, Ramati said. It offers the HERO Simulator to get trainees started.

There are finer points that take more time to learn, such as whether to attack using a high, medium or low angle, depending on the target and the type of warhead, he said.

And while the company does not yet offer a quadcopter vertical takeoff and landing loitering munition, a Sofia, Bulgaria-based company at the Eurosatory conference did.

Hades Defense Systems was displaying its “Spark vertical attack programable kamikaze quadcopter,” which can ascend at 5 meters per second and fly at 47 kph with a range of 7 kilometers.

“It positions itself above its target at a precise altitude, reverses its propellers’ direction, speeds up [as it goes] down and attacks from above,” company literature said.

The “Nemesis Kamikaze Attack Jet Drone” is still in development using internal research and development funds and could only be seen on a company fact sheet.

Hades envisions it flying at 600 kph, using terrain mapping and a variety of anti-jamming devices and radar spotting systems to avoid detection, the company literature said.

It would be catapult-launched with a range of 190 kilometers, maximum altitude of 4,500 meters, and guided remotely or run on autopilot.

Company engineers were still working on how large of a warhead it could carry, she said.

The company hopes to have something physical to display at the IDEX conference in Abu Dhabi being held in early 2023, Pangarova said.

Singer said he has little doubt Hades, or any other company, could convert an aircraft intended for the commercial market to some kind of rudimentary loitering munition.

“You’re really getting into a fuzzy definitional line between loitering munitions and cruise missiles,” he said of jet-powered drones that can convert themselves into bombs.

Along with the military utility of doing so, there are questions about international laws that prevent sales and trade of missiles that could potentially deliver weapons of mass destruction.

Meanwhile, there is much for military strategists to ponder as loitering munitions proliferate. There is a disconnect between the major military programs the U.S. armed forces have been fielding over the last decade and drone warfare, Singer said.

“What does a future with massive numbers of loitering munitions mean for major military platforms that are the [service’s] centerpieces? That goes for land, air and sea. Those kinds of connections have not been fully made yet.”