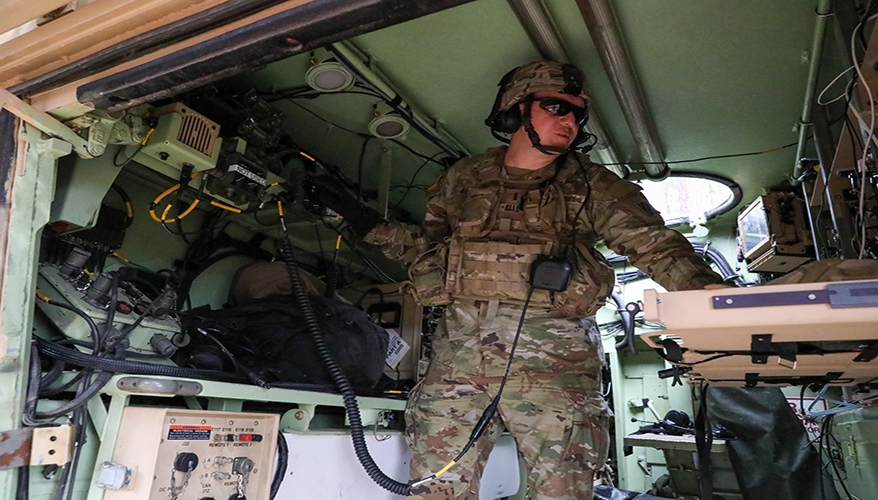 NOVI, Michigan — Technological advances are increasing lethality and giving warfighters more capabilities on the battlefield, but technology comes with costs in complexity, detectability, sustainability and mobility, according to Army officers.

The proliferation of sensors and new weapons, vehicles and other platforms is straining computer and human networks in brigade combat teams that have to operate and maintain the systems, said Col. Jon Meredith, commander of 1st Cavalry’s 1st Brigade, on Aug. 17.

“Because often what we've seen is we will build a system or put something into a brigade combat team, and we have not thought about the context of that … team and the implications of placing that system in an organization like mine,” he said during a panel discussion at the Ground Vehicle Systems Engineering and Technology Symposium organized by the Michigan chapter of the National Defense Industrial Association.

“If you think about an armored brigade combat team, it is a system of violence and destruction and the entire thing has to work correctly all the time, and that is an incredibly complex endeavor,” he said.

He asked industry to consider how commonality across systems could help the Army minimize complexity as much as possible.

“Any system you put into my brigade or in the Army is something that we have to maintain and care for,” he said. “So, if you've not thought through that, I really ask you to do that because commonality will save us a whole bunch of headaches across the battlefield.”

“It's an ecosystem,” said Lt. Col. Robert Gichert, commander of the 2/11 Armored Cavalry Regiment. “If the new thing has unique requirements that change how I operate, that's a much bigger math problem than I like dealing with.”

Often, new systems or technologies are presented as being decisive, he said, but the force is at its best when commanders find ways to combine things in a new way that creates a challenge an enemy hasn’t seen before.

“So, I think my largest frustration with new technologies that can feel like they are supposed to be a silver bullet and they were developed alone” is that their impact on a unit is not accounted for, he said.

While new vehicles or weapons require special handling that can slow down a brigade, the digital load of a modern command can be a larger problem, Meredith said.

“The biggest struggle that we are having right now is our network, and we have a large variety of systems that all have to work together,” he said.

The massive electronic signature and power generation required makes command posts easily detectible, to the point they are impossible to hide, he said.

“I have a lot of people come tell me that my command post is wrong, but they don't tell me what it should look like,” he said. “They just tell me that it has to be smaller and dispersed,” he added.

“The frustration is understanding what we have to do and not having the right equipment or technology to be able to do it right now,” he said.

Panelists said one technology that has potential to ease strained networks is robotics.

Using robots for reconnaissance and security efforts in a brigade combat team has "a lot" of advantages, said Col. Erik Oksenvaag, senior staff trainer at the National Training Center, Fort Irwin. “It gives commanders a lot of opportunity to take more risk and not expose their soldiers.”

Robots can serve as a force multiplier for defensive purposes, he said. They can hold flanks while soldiers focus on building barriers and defensive structures.

“The thing about the robots is, it's going to preserve the lives of my soldiers,” said Meredith. “It's going to make some of those really difficult things that we have to do on the battlefield easier.”

However, robotic technology is currently limited by range and reliability, he noted. Panelists said that another downside to employing robots is that they can increase workload.

“Everything we field has a massive impact when it comes to sustainment and maintenance,” said Oksenvaag. “The more systems we have on the ground, with fewer people, how do we create the opportunities and time for those people to service not their own equipment, but also those robotics equipment or unmanned vehicles?”

“Every piece of equipment or thing that you add onto that vehicle makes it more complex" and increases logistics requirements, added Meredith.