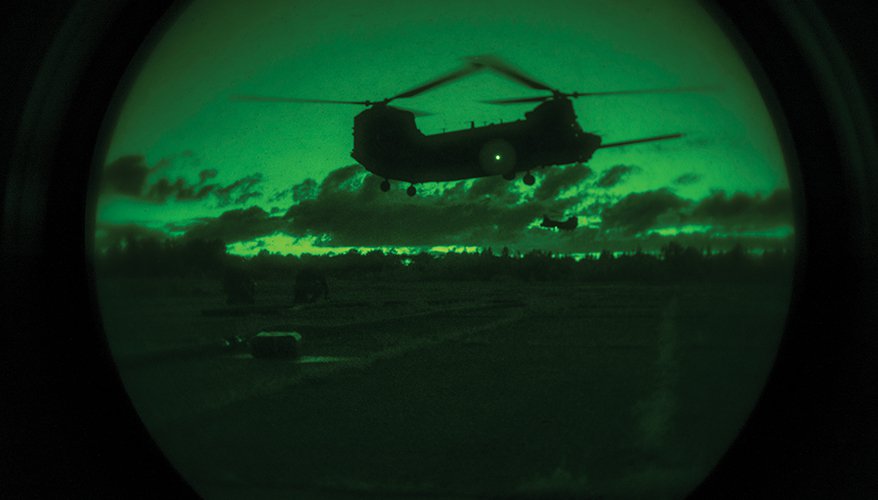 TAMPA, Florida — The Army is working on developing two new speedy helicopters, and Special Operations Command expects them both to one day be in its inventory — with modifications, of course.

“They’re asked to deploy anywhere in the world with short notice. And they’re asked to do most of their missions at nighttime, at low altitude and at high speed,” said Geoffrey Downer, SOCOM’s program executive officer for rotary wing aircraft.

“Those missions sets require very unique capabilities on the aircraft,” he said at the Special Operations Forces Industry Conference, organized by the National Defense Industrial Association.

The command has taken these three aircraft — the Little Bird beginning its life as a commercial aircraft and the other two based on Army designs — and altered them with upgrades and features that allow them to do their special missions, he said.

Meanwhile, the Army — under its Future Vertical Lift program — is developing the Future Attack and Reconnaissance Aircraft (FARA) for assault and scouting missions and the Future Long-Range Assault Aircraft (FLRAA) to replace the Black Hawk.

“We’re very excited about the ability to get these new aircraft in our fleet,” Downer said in a briefing at the conference.

Speed is the primary reason he cited. The Little Bird tops out at 90 knots. The FARA will allow pilots to fly about twice that speed at 180 knots. The MH-60 flies at 120 knots, its replacement will be required to go 230 knots, he noted.

“This gives us a chance to have a revolutionary new approach to fly the aircraft,” he said.

The three hallmarks of the Future Vertical Lift program include increasing the speed and range of the aircraft and creating a modular, open-system architecture.

The latter suits Special Operations Command as it has a history of taking helicopters and adding features to help them perform their special missions.

The rotary wing office tries to use as many common items with the Army as possible because they don’t come out of SOCOM’s funding. If the Army doesn’t have a needed capability, the program executive office goes to other services or commercial-off-the-shelf items. “And if those do not exist to meet our requirements, then we develop those uniquely by ourselves,” Downer said.

One example is countermeasures. Special ops helicopters have unique flares to match their missions, he noted. Another is larger fuel tanks to extend the aircrafts’ range.

Unlike the legacy aircraft, SOCOM is deeply embedded in the Future Vertical Lift development, Downer said.

“We’ve always received aircraft from the vendors or from the government, and we had no impact on the design. We’re in a unique situation where we can actually influence the design,” he said.

There are two competitors for each program — Bell Helicopter and Sikorsky for FARA and Bell going against a Sikorsky-Boeing team for the Black Hawk replacement.

The rotary wing office is conducting studies with the four teams to look how to incorporate unique special ops requirements into the designs, he said.

“We want to start identifying those upfront, so when we do our mods, we already have that space identified,” he said.
SOCOM expects to receive prototypes around the same time as the Army so it can start on the modifications as soon as possible. The current projected date for fielding the two aircraft isn’t until 2035, he noted.

There might not be a complete replacement for several years beyond 2035, especially when it comes to the Little Bird. The new scout aircraft will have longer rotor-blades. The Little Bird’s are only 40 feet long, which is more suitable to flying in the urban canyons found in large cities, he said, meaning the command will want to keep some in the inventory.

“My big concern is we’re modernizing our fleet flying 200-plus knots and I’ve got an aircraft that flies 80 to 90 [knots] so it’s not going to be able to keep up,” Downer said.

The increased speed will allow commandos to arrive at a destination quicker. After landing, they often have to proceed to an objective on foot in the cover of darkness and make it back before light, so the time saved in the air could give them more time on the ground, Downer explained.

When the Little Bird first arrived in the SOCOM fleet, operators began experimenting and creating new missions with it.

Downer expects the same with the new aircraft.

“We don’t know yet how we’re going to use them differently,” he said.

The dual rotor/"pusher" propeller FLRAA (Reliant X) should be our Blackhawk replacement and, with a narrower fuselage, the Apache Longbow replacement. This is a FAST chopper.

Eric B. at 10:43 PM
Re: Special Operators Await Speedier Helicopters

I was surprised there was no mention of tiltrotor aircraft. Air Force Special Operations Command (AFSOC) has been flying the V-22 for well over a decade in support of Special Operators. With aerial refueling and max true airspeeds of around 260 knots, the tilt-rotor configuration offers speed and range advantages over other FVL compound helicopter configurations. Building off of the V-22 design, Bell's V-280 FVL tiltrotor prototype has flown 300 knots. It seems the 230 knot speed requirement was implemented to include the slower compound helicopter designs. Compound helicopters do provide increased speed over conventional designs. If the Army really wants speed, they should at least consider the tiltrotor configuration.

A lot of work might be needed to modify new FARA and FLRAA rotorcraft to USSOCOM requirements.

FARA...it will be nice to have a turreted 20mm cannon with fire control system, something SOF rototcraft don't possess outside of the M230 chaingun on Blackhawks outfitted with Direct Action Penetrator (DAP) wings. But does SOCOM need AGM-114 Hellfires ATGMs? They would be nice to have, but AH-6s are often outfitted with twin 7.62mm miniguns and seven-shot 2.75" rocket pods, not AGMs and Stinger SHORADS. Do SOCOM FARA attack helicopters need such heavy ATGMs? The MD969 has a max cruise speed of 141 KTS, but USASOC doesn't have a requirement to use the MD969, but the M969 can replace the AH/MH-6 and perform "double-duty" or attack and transport in a little helicopter.

FLRAA...whatever the configuration, it will need armament wings to replace the Blackhawk DAP because I doubt that SOFs want to lose their M230 30mm chainguns and heavier armament if the FLRAA were to replace the MH-60s. Flying at such high speeds require testing to see if DAP wings can withstand 230 KTS.

Speed is essential in Direct Action missions, but time and again, enemy fire has proven that armament and armor are required in SOF missions and so far there is no mention of armor or bulletproof glass in these prototypes. When outfitted with Government Furnished Equipment (GFE) and armor, how fast can these new rototcraft go when burdened with these GFE additions?