Some Prescriptions for Ailing Defense Industrial Base

6/9/2022
By Stephanie Halcrow and Nicholas Jones 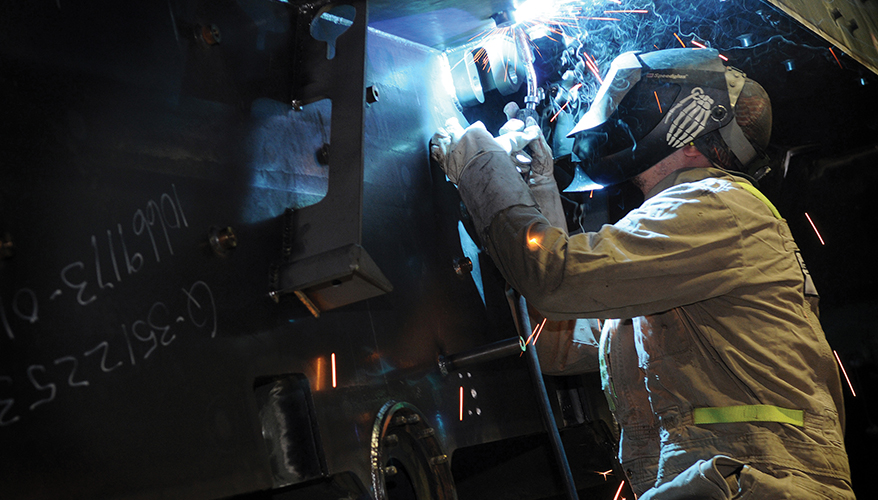 The defense industrial base is one of the nation’s enduring advantages, and one that cannot be taken for granted.

Earlier this year, the National Defense Industrial Association released Vital Signs 2022: The Health and Readiness of the Defense Industrial Base, the third edition of the flagship study. For the first time, the report scored the health of the industrial base business environment below a passing level.

These vital signs are an attempt to move beyond traditional defense industry analysis, which heavily relies upon the financial performances of a few companies, ignores key indicators and excludes the vast majority of defense contractors that are not publicly traded.

Unlike traditional medical vital signs measured on the spot, our conditions are observed remotely, both in time and space, using publicly available data and results from an annual survey. We believe this information reflects the state of the defense industrial base during the first year of the COVID-19 pandemic.

Based on the findings, we offer the following policy prescriptions.

First, as the Russian-Ukrainian War continues, Ukraine will need to be resupplied and U.S. stocks will need to be replenished. In the first year of the pandemic, the “productive capacity and surge readiness” vital sign demonstrated last year’s largest decline, largely due to weakness in the overall economy. In the 2022 survey, 78 percent of respondents said the availability of skilled labor was a moderate or significant problem.

Sixty-three percent indicated the same for the availability of cleared labor when asked what would affect their firm’s ability to increase defense production in response to a surge in demand. The Defense Department’s continued partnership with industry will be key to this effort.

Next is the need to accelerate acquisition reform. NDIA looks forward to the Commission on Planning, Programming, Budgeting and Execution Reform.

Section 1004 of the fiscal year 2022 National Defense Authorization Act created this independent commission within the legislative branch to recommend reforms of the Defense Department’s PPB&E system.

The association is hopeful that the commission will consider efforts to reform the budget process, including implementing a two-year budget and appropriations cycle.

The association also recommends reforming rules to create more flexible spending when operating under a continuing resolution. Starting new prototype programs, or testbeds, that drive new ways of innovation within the budget, would also be welcome.

The Defense Department’s increased use of other transaction authorities, or OTAs, and last year’s release of the “Adaptive Acquisition Framework,” are positive developments for the department’s ability to quickly field new technologies and surge production. The military needs to boost the number of other transaction authority agreements, which gives contracting officers greater speed and flexibility when awarding funding for protypes.

During fiscal year 2020, the U.S. military awarded more than $16 billion in such agreements, almost as much as the previous four years combined, and up more than $8 billion from 2019. A closer look reveals nearly half of that amount, about $8 billion, was dedicated to COVID-19 related spending. Incentives and additional training to boost other transaction adoption by the acquisition workforce must gain traction.

NDIA also continues to support work to create a new appropriations category — or a new “color of money” — for software acquisitions. Military capabilities are increasingly “software defined and hardware enabled.” But acquiring software is not like acquiring hardware. Through upgrades, software is constantly delivering while never completely “delivered,” meaning traditional acquisition methods are a poor fit.

Meanwhile, autonomous systems, artificial intelligence and other innovations have intensified the need for department-wide intellectual property reforms that will protect the rights of current defense contractors and encourage new entrants.

Another prescription is to raise the simplified acquisition threshold, which is the maximum amount of a contract where an acquisition official can apply simplified rules. Increasing the threshold may encourage new entrants by lowering barriers to entry and speeding up lead times.

That amount is currently set at $250,000. Recent inflation makes this more urgent.

The need for budget stability is the next prescription.

NDIA continues to support predictable levels of timely government funding for the armed services and national security. The Vital Signs 2022 survey noted that 72 percent of respondents said “the uncertain prospect of continuing volumes of business” was a moderate or significant deterrent to devoting significant amounts of capacity to military production, up from 60 percent the previous year.

Maintaining innovation is another key recommendation.

We also recommend significantly growing the number of Vannevar Bush Faculty Fellows, who are tasked with pursuing transformative research in the Defense Department. Only 10 new fellows join per year. Increasing their numbers would be a good start to boost basic research initiatives.

Starting this year, the “Tax Cuts and Jobs Act of 2017” requires qualifying research-and-development expenses to be amortized over five years — which will significantly disincentivize R&D within the defense industrial base. A delayed implementation of this requirement will ensure that defense companies are incentivized to continue their research activities.

And like last year’s recommendations, the association believes every service should continue to build and refine business accelerators such as AFWERX and the Defense Innovation Unit to jumpstart business model and technology innovations and to reduce barriers to doing business with the Defense Department.

Lessons learned from technology adoption in other highly regulated industries, like energy, should be evaluated for their applicability to the defense industry.

Proper funding, tax incentives and business accelerators are just a few of the tools available to achieve maximum innovation in the defense industrial base.

Meanwhile, the pandemic continues to reveal vulnerabilities to the nation’s supply chain. The “Producer Price Index of processed goods for intermediate demand indicator” — which measures the average change over time in the selling prices received by domestic producers for their output — had the largest yearly drop of all Vital Signs. NDIA is also concerned with the number of companies that are the sole eligible provider of defense products, which is 31 percent, according to the most recent survey, up from 29 percent last year.

Also alarming is the economy’s dependence on foreign sources of rare earth elements. The importance of these elements to the future of the economy, and national defense, cannot be overstated. These so-called “technology minerals” are used in a variety of military subsystems, including high-density magnets.

China dominates the global supply chain for rare earths. The United States is 100 percent dependent on China for all metalized rare earths, even if they are mined within the United States. This is a difficult problem. China’s rare earth refining ecosystem is composed of hundreds of companies, built over nearly two decades, with significant support from the government of the People’s Republic of China. This has been the situation since at least the early 2000s. Similar industry support will be required to improve U.S. refining capability.

The United States needs to aggressively create a rare earth refining capability that is not tied to China or other adversaries.

NDIA also continues to support measures that seek to understand the strengths, vulnerabilities and opportunities that confront the supply chain. In Vital Signs, industry analysis of Form 10-K annual reports revealed significant weakness with supply chains. We are not aware of anyone within the Defense Department routinely analyzing the defense industrial base using disclosures required by the Securities and Exchange Commission. Government-generated data from the Federal Reserve, Bureau of Labor Statistics and the SEC can give the department better insight into potential problems — like an early warning system — at a very low cost.

Another prescription: give industry certainty on cybersecurity requirements. NDIA recognizes that like last year, the defense industrial base faces unprecedented threats to the security of its operations, data and intellectual property. The Defense Department must continue to establish risk-based, implementable measures to protect controlled unclassified information and secure the information systems that handle proprietary data. The association supports the policy goals of the Cybersecurity Maturity Model Certification, which will require defense contractors to maintain cybersecurity standards. It also supports Section 889 of the fiscal year 2019 National Defense Authorization Act that prohibits the department from purchasing telecommunication goods from certain Chinese companies.

However, we continue to have concerns about implementation of both these policies. We are still receiving questions about Section 889 compliance from members. New legislation should enable a risked-based approach to Section 889 Part B compliance, which has much broader definitions, and require a list of prohibited equipment and approved replacements.

As for the Cybersecurity Maturity Model Certification, the reset to its 2.0 version has looked a lot like CMMC 1.0, with an interim rule expected by May 2023. This has introduced uncertainty for small and midsize companies that are trying to upgrade their operational technologies and other systems required to comply with future rules. These companies are trying to compete immediately, and next spring is too long to wait.

In the meantime, a tax incentive to promote cybersecurity best practices could quickly posture companies for future compliance. The 2023 budget request’s inclusion of increased cybersecurity support to the defense industrial base — through additional pilot programs and services — is welcome and needed.

As for workforce issues, this year’s Vital Signs gave the defense industrial base relatively high scores for gender and age diversity, but scores for racial diversity, and particularly representation from Latino groups, could be improved.

Equity and inclusion is a priority of the current administration. NDIA continues to encourage this at all levels of the Defense Department acquisition workforce.

The association created the Defense Workforce Project to develop recommendations for government and industry leaders. The comprehensive workforce recommendations will be released later this year.

U.S. creativity and risk-taking are among the country’s greatest assets. Unfortunately, these traits are not always harnessed at all levels of the defense acquisition workforce.

This may require people who have had different experiences. Congress should consider legislation requiring senior acquisition managers to have rotations inside private sector companies, like the joint qualification requirements for general officers.

Nicholas Jones is NDIA’s director of strategy and Stephanie Halcrow is the association’s senior fellow for defense industrial base health and resiliency.

Re: Some Prescriptions for Ailing Defense Industrial Base

Where are last week's comments on CMMC? We commented already on this article and those comments are missing from here. AS in the DoD and NDIA CMMC working groups, CMMC is not ready for prime time until May 2023. And its reason for existence is questionable w/o a Cost-Benefit analysis. In the latest DAF SSE Cyber Guidebook used by the DoD and 4 USAF Commands, CMMC is not recommended for contracts; but the exact data and IT Security needs for the Program Office should call out the specific NIST standards with some means of V&V them in a contract. Going retro-active in contracts involves a ROM with serious costs incurred and perhaps legal reviews and litigation, as has happened to date. If CMMC is a valuable means of V&V a Contractor's security posture, then this should be made a part of their ISO/CMMI certification process w/o incurring further DoD costs. We await the DoD CIO's ruling this May 2023.