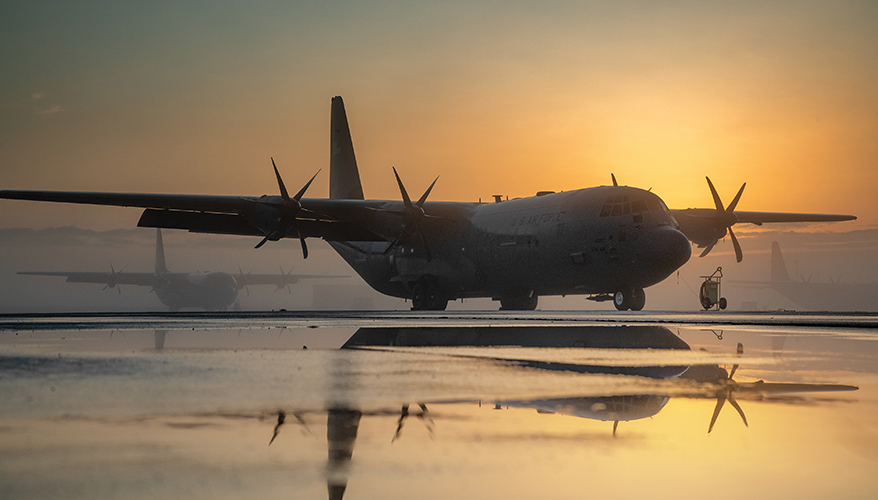 The Air Force’s fleet of airlifters — roughly half the size it was during the 1990s — has been operating at high tempo for two decades, wearing out airplanes with no near-term prospect of replacement and further cuts to the force planned, despite projected demand for airlift that will operate in increasingly contested environments.

It’s a problem Gen. Jacqueline Van Ovost, commander of U.S. Transportation Command, highlighted in statements before the Senate Armed Services Committee March 29. The Air Force’s largest airlift fleet, the C-130 force, has experienced the greatest change “of all mobility priorities” over recent decades, losing almost 50 percent of its capacity “from a high of well over 500 aircraft in Operation Desert Storm to the current programmed levels,” she testified.

Currently, the Air Force has 279 C-130s. The shift away from a “two major war sizing construct” and a de-emphasis on other high priority global missions drove reductions, Van Ovost said.

But that goal hasn’t been realized so far according to the fiscal year 2023 Air Force budget request, which shows a capacity of 271 C-130 aircraft.

Cuts to airlift capacity aren’t limited to the C-130 fleet. Since 1970, the Air Force has operated the C-5 Galaxy as its strategic airlifter. A total of 131 were built, but just 52 modernized C-5Ms remain in service. The Air Force now has 223 Boeing C-17s serving alongside the C-5 fleet.

The C-17 and C-5 are out-of-production, so the service has all of the Globemasters and Galaxies it will ever get. Lockheed Martin’s C-130 is the only U.S. airlifter with an active production line. According to Lockheed Martin spokesperson Stephanie Stinn, only 15 airlift-dedicated C-130 variants remain to be delivered to the National Guard.

The numbers show a decline in airlift capacity at time when demand for airlift looks likely to increase. America’s pullout from Afghanistan was expected to alleviate some of the pressure on airlift. But with ongoing operations in Europe to bolster NATO and support Ukraine and a national defense strategy that calls for increasing operations throughout the Indo-Pacific to deter China, demand isn’t going away.

If the C-17 were still in production, “I think we would be buying more of them,” he said.

However, Transportation Command assessed that the existing strategic airlift fleet “is still consequential [adequate] to the current and emerging demand that the National Defense Strategy requires,” he said.

Despite concerns about the reduced supply of airlift, Busler said airlift capacity is adequate.

The command uses a “million ton-miles per day” metric to assess whether the organic strategic airlift can move enough cargo to meet wartime requirements in a conflict with China or Russia.

By that metric, he said, “We don’t see that’s diminished at all in both great power conflicts.”

Current demand for airlift is at half its highpoint during the 2010 surge in Afghanistan in terms of missions per day or flying hours Busler said. But demand spikes like the evacuation of Kabul last August still eat up airframe service life.

Nevertheless, he said the command “thinks it’s sitting pretty well” with the C-17 fleet given its age and “when we think, late 2050s and 2060s, that this aircraft will continue to fly.”

However, recently released documents from the Air Force’s mobility and training aircraft directorate, which include fiscal years 2022 to 2027 “roadmaps” for the C-17, C-5 and C-130 fleets, indicate a host of recapitalization and maintenance challenges for all three fleets.

Many upgrade programs for things like C-17 corrosion abatement and flight deck upgrades, C-130H engine improvements and C-130J center wingbox replacements are either unfunded or only partially funded, the documents stated.

Improved communications and datalinks that would digitally-connect airlifters with other Air Force assets as promoted by the service’s Advanced Battle Management concept are missing entirely from the five-year roadmaps for C-17 and C-5M, and only arrive for C-130J beginning in 2026, the documents noted.

In addition the roadmaps Indicate that C-17s and C-5Ms suffer from parts obsolescence as component suppliers no longer make a range of parts for the aircraft or are out of business.

“C-5M has readiness challenges today with its availability,” Busler noted, adding that he “would not confirm or deny” that the Air Force had budgetary discussions last year about retiring the entire C-5 fleet.

Busler said attrition is factored into Transportation Command’s airlift planning and assessment accounts. “The guidance is we do not size the force for attrition, but the reality is it does occur and it does compound risk. We translate the degradation of the fleet over time or attrition into risk.”

Samuelson said the secretary of the Air Force has asked Air Mobility Command to begin to look into a future airlifter “on an accelerated timeline.” A capabilities assessment and analysis of alternatives for a "C-X" are the first steps, he confirmed.

Because of the need for future airlift to operate in contested environments, the Air Force is mulling a “family of systems” approach to airlift wherein a smaller number of advanced airlift platforms complement “the backbone” of the existing force “that can do other daily competition activities and movements,” Samuelson added.

Transportation Command “is identifying the need for, probably, a replacement aircraft in the 2040s,” Busler said. “Operational environments are still growing and they’re more challenging.”

“Airlift will need not only the right capacity but the ability to operate near the fight “where you can either protect or call fires in to degrade the adversary or create opportunities to employ them and do things like trans-load. That’s where we see us really changing the nature of how we employ the mobility enterprise,” Busler said.

“The mobility enterprise must solve all of these problems on its own” ahead of procurement of any future airlifter, he added.

Members of the armed services committees asked him if the Air Force needs to buy more airlifters.

“I wouldn’t go there first,” he said. “I would go to what we need to do to set the conditions to operate the enterprise. How do we protect it?

How do we integrate it with the ability to operate with other things like fires?” he said.

“Can we get more out of command and control and the ability to understand the battlespace and be smarter in how we employ [airlift] assets?

Do we have better situational awareness to avoid or negate the threat? And where do I find multiple paths to operate in the battlespace which puts more enablers like operating airfields or seaports [in play] rather than just the assets to operate at those locations?” he asked.

“This is a multi-pronged approach that has to be brought to bear. Making it a capacity issue won’t be totally sufficient,” Busler said.

Clarifications: A previous version of this story suggested the Air Force and National Guard C-130J aircraft were under one contract. They are sperate contracts. It also suggested a capabilities assessment and analysis of alternatives for the C-X were underway. It has yet to start.

Re: Air Force Under Pressure as Airlift Capacity Falls

Were the late 747 cargo variants ever considered for Military transport?

davidjames at 1:55 AM
Re: Air Force Under Pressure as Airlift Capacity Falls

@davidjames - The C-5 and C17 were designed to land, take-off, and operate at austere environments - something you cannot do with commercial airliners. Part of the requirement is roll-on/roll-off capability for pallets and vehicles.

@sferrin - actually, there is, but given the budget environment and the plethora of other systems in acquisition, that has been put back. Consider reopening the C-17 line - a lot of investment to set up the production line - getting the equipment, people with the bright idea of making upgrades - expect several years.

@trisaw - yes, hindsight is 20/20, but only looks good on tight-fitting jeans. Strategic airlift requires aircraft to carry large payloads on inter-theater flights. The C-130 is technically set for intra-theater airlift operations, and not enough payload to meet what the big ones do.

John McKee at 11:47 AM
Re: Air Force Under Pressure as Airlift Capacity Falls

And there are exactly ZERO plans to do anything about replacing the C-17 or C-5. They'll wear out, retire, and that will be that. Oh, I'm sure there will be a fig leaf or two, "modern warfare doesn't require air-transport" or "we can use built-in cargo capacity of our tankers" or some such nonsense, but there won't be anything real.

sferrin at 11:41 AM
Re: Air Force Under Pressure as Airlift Capacity Falls

Steve Alonso at 11:13 AM
Re: Air Force Under Pressure as Airlift Capacity Falls

Years ago, the USAF was asked if they needed more C-17s before production ceased. The USAF said that they're fine and stopped C-17 production.

This just goes to show that nothing beats a military airlift plane because of the STOL capability. The 747 requires about 10,000 feet of runway whereas a C-17 only about 4,000 feet fully loaded.