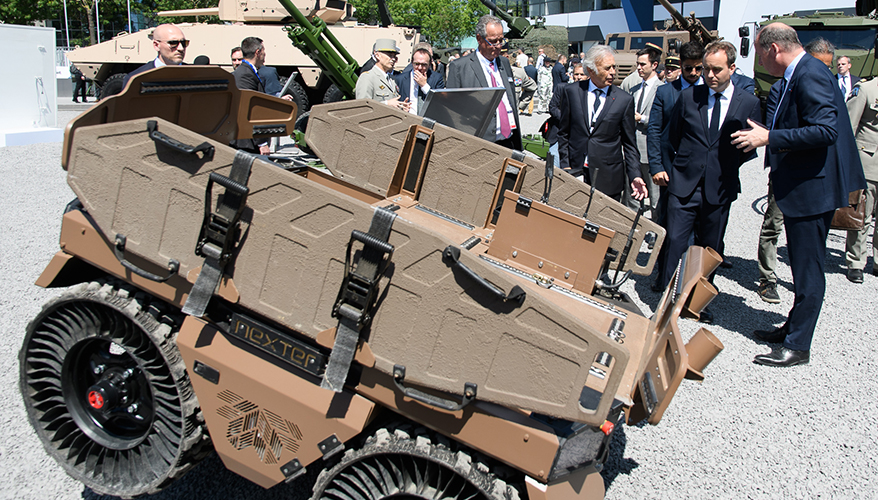 PARIS — A company specializing in land defense systems is offering its customers next-generation robotic vehicles that it says will augment ground-based security, surveillance and lethality.

Nexter Robotics — part of the Nexter Group owned by the French government — showcased a suite of multi-mission unmanned ground vehicles this week during the Eurosatory international defense conference in Paris. These include the armed Optio-X20 robot and the Ultro cargo carrier.

Because the market for UGVs is not as established, the company is pitching the robotic vehicles to customers hoping to demonstrate the full range of tasks they can do for militaries, said Phillipe Gosset, multi-mission tactical robots manager for Nexter Robotics.

The company has conducted tests alongside warfighters in different mission scenarios to develop the best demonstrators for customers, he said.

The Optio-X20 is a 4x4 armed UGV that features an open architecture interface. Gosset noted that it is equipped with the Arx20 cupola gun fitted with an automatic 20mm cannon and a 7.62mm machine gun that is gyro-stabilized to reduce tilting movements.

The UGV is topped with cameras, including a panoramic one, to allow users to operate it beyond their line of sight, he said. The system is connected to a remote interface where an operator can view multiple cameras at once, control its turret and fire the Optio-X20’s weapons.

Also on display was the Ultro, a 4x4 cargo UGV that militaries can use for logistics or reconnaissance missions. The vehicle is designed to give warfighters an added “mule” capability and can carry payloads up to 1322lbs, including ammunition or even wounded warfighters, according to the company.

While it was developed for carrying supplies, the Ultro can also be outfitted with reconnaissance equipment and other sensors.

Like the Optio-X20, the Ultro is operated with a remote interface and has the ability to use autonomous functions, Gosset said.