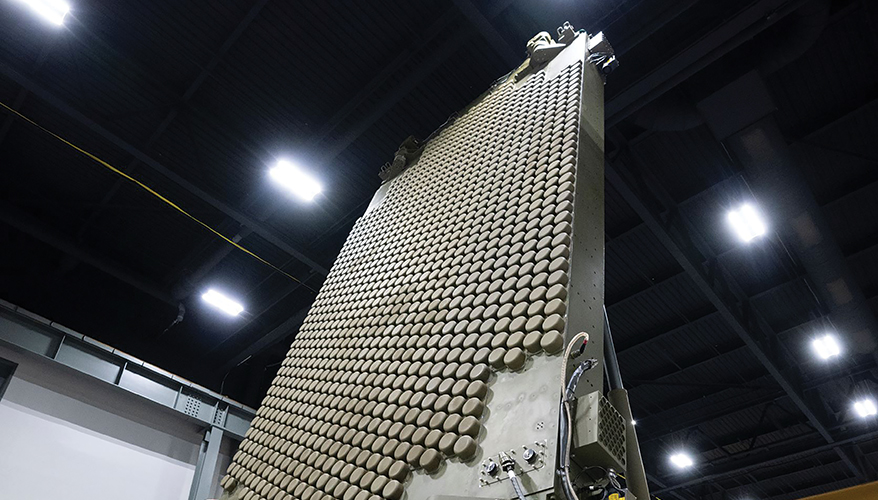 What sets the TPY-4 apart from other radars on the market is its software-forward design, Herodes said.

“If you imagine older style radars as putting out beams and receiving energy back, they kind of did it as an entire antenna,” he told reporters during a tour of Lockheed Martin’s facility in Syracuse, New York.

The TPY-4 radar, however, has more than 1,000 individual mini-radars the size of a hockey puck that can be independently and digitally controlled, Herodes said. This allows users to make software changes without altering the radar’s hardware, he said.

The open architecture also gives the radar additional flexibility to detect the specific threat a user is facing, he added.

Chandra Marshall, vice president of radar and sensors systems at Lockheed Martin, noted the software-defined architecture will allow future users to easily keep the radar relevant as threats evolve in the future.

“That capability allows them to not have to send back the system for us to upgrade the hardware for them to defend against new threats,” she said. “We update the software and push it to the radar, and they can meet the missions that they have.”

The TPY-4 is also a multi-mission radar able to track targets from 6 degrees below its position all the way up to 90 degrees and eliminate blind spots, according to the company. Its sensors can detect smaller, hard-to-identify threats through heavy clutter — other signals in the environment caused by animals, water and more.

Lockheed Martin’s contract with the Air Force includes options for the production and fielding of 35 additional TPY-4 radars. The company is currently on order for at least two more systems, Herodes said.

In the meantime, the first radar will be sent to the company’s site in Cazenovia, New York, for 15 months of testing with the Air Force, he said. The Syracuse facility uses the site to test its entire portfolio of radars, including the TPS-77 Multi-Role Radar and the Army’s AN/TPQ-53 radar.