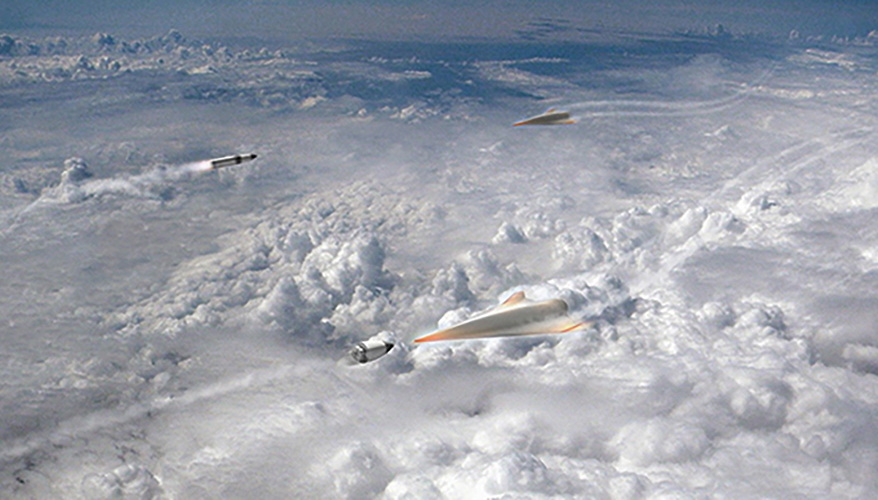 The Defense Advanced Research Projects Agency, racing to enable technologies to defend against hypersonic weapons, has entered the second phase of its Glide Breaker counter-hypersonic program.

Like Patriot, or other current anti-missile systems, the aim of Glide Breaker is to take down a hypersonic weapon in flight by guiding a kill vehicle directly into the oncoming weapon. Given the speed and maneuverability of hypersonic weapons, the task of striking one in glide phase is far more complex than taking out an oncoming ballistic missile.

“The ballistic threat is not maneuvering … and you don’t have this air flow around the overall body,” said Maj. Nathan Greiner, DARPA program manager for Glide Breaker.

The speed, altitude, jet interactions and other dynamics of striking down a hypersonic are novel. “We, simply put, do not have a very large data set to help us understand these things,” he said in an interview.

Unlike the “gobs” of data on existing flight technologies, when it comes to counter-hypersonic flight, “there’s almost nothing for us to base our scientific understanding on,” he said.

Launched in 2018, Glide Breaker’s first phase — awarded to Aerojet Rocketdyne and Northrop Grumman — focused on developing a “divert and attitude control system” necessary for a kill vehicle to intercept and destroy a highly maneuverable hypersonic weapon in glide.

DARPA’s April 14 Broad Agency Announcement for phase 2 seeks proposals to conduct wind-tunnel and flight testing to gather data on endo-atmospheric effects — the impact of jet interactions between the divert and attitude control system and hypersonic crossflow, and how that affects controlling and maneuvering the kill vehicle, said Greiner.

DARPA laid out a 48-month roadmap for phase 2. The expectation is that the contract winner will conduct 24 months of wind-tunnel testing, and then construct a demonstration vehicle for two flight tests in months 36 and 48 of the contract.

The limited supply of and high demand for wind-tunnel facilities requires a two-year window for providers to conduct testing, Greiner explained. The upside of the time investment is that the data will create “a starting point for programs in the future to design their operating systems,” he added.

“We’re standing up a new capability that programs of record such as GPI can follow in after our program ends,” Greiner said.

The contract winner will need to create a demonstration vehicle, but DARPA is agnostic on the physical product.

“We’re leaving it up to performers in terms of how they want to go forward and implement the technical solution for the actual payload itself with the understanding that the focus is really on gathering the external aerodynamics data,” said Greiner.

Re: Counter-Hypersonic Program Enters Next Phase

I think Russia and China are producing a lot of wishful thinking rather than having an actual functioning system. The hypersonic used in Ukraine was nothing more than a sonic missile that actually in some cases missed the target.

alex cokonis at 5:24 PM
Re: Counter-Hypersonic Program Enters Next Phase

why we are not focused (and much further along) on energy beam weaponry is an indictment of a pink Pentagon full of putrid garbage. the halls of the Pentagon must be emptied of this dross.

The problem with counter-hypersonic SAMs is that the DoD has to fly the launcher to the guarded site and deploy the trucks and systems at the airfield. And then all the units have to drive from the airfield to the guarded location (port, city, base, airfield, whatever), set up, and defend the area. Against hypersonic missiles, that takes up too much time. The Israeli "Arrow" SAM is fast enough to engage hypersonic missiles with rumors of Mach 10-15+ speeds.

I think the best defense is the resurrection of the Airborne Laser (ABL). A 737 ABL can take off, loiter, and aerial refuel and remain on station for hours or even days with the proper bunks and crew shifts. Instead of the toxic stew of chemicals as on the 747 ABL, can the 737 E-7A "Wedgetail's" MESA radar antennae be converted into a wide-band laser to shoot at the hypersonic, supersonic, and cruise missiles? Instead of a focused beam against ICBMs like the 747 ABL, can the E-7 ABL pulsate lasers at the hypersonic missile to at least damage the aerodynamic skin or create enough heat to render the fins or missile to fall short of its flight trajectory? That way with 360-laser emitters from the "Wedgetail," the E-7A ABL doesn't have to steer to shoot its nose as the targets and can attack multiple targets at once from the dorsal antennae. Or...make the MESA antennae some sort of miniature HVP railguns that shoots for hundreds of miles with lots of hypersonic BB pellets for anti-hypersonic missile flak.

I do not have much confidence in the U.S. developing a counter measure to Russian hyper-sonic missiles. The U.S. under Biden is more concerned with climate change than defense.