SOFIC NEWS: First Soldiers Will Get Next-Gen Squad Weapons in 2023 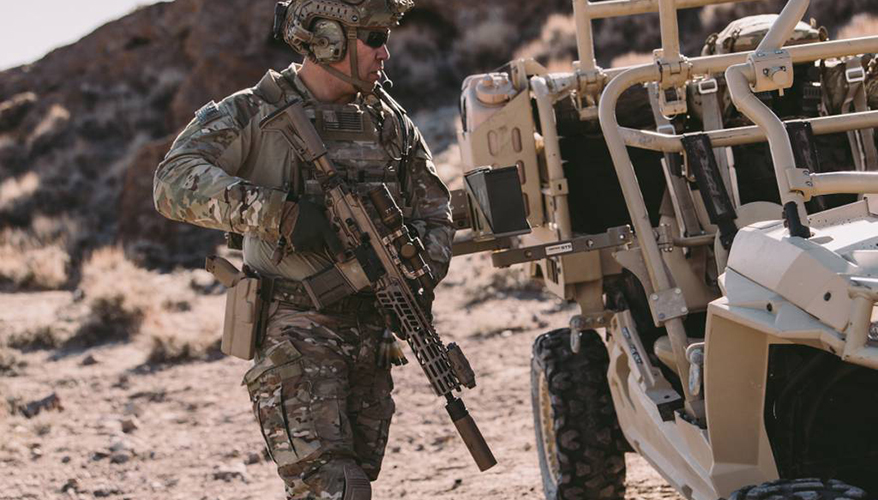 TAMPA, Florida — For the first time in decades, the Army will employ brand new rifles, automatic rifles and ammunition calibers, with the first unit receiving the next-generation squad weapons by fall of 2023, according to the makers of the weapons.

After years of development and intense competition between major gun makers, the Army announced in April that Sig Sauer Inc. will manufacture the service’s next-generation squad weapons. The 10-year firm-fixed-price follow-on production contract is worth $4.5 billion and covers the delivery of two variations of the weapon — the XM5 Rifle and the XM250 Automatic Rifle — as well as the 6.8x51mm FURY hybrid ammunition.

Sig Sauer plans to send the first round of new weapons and ammunition to an Army unit by next year, CEO and President Ron Cohen said May 18 on the sidelines of the Special Operation Forces Industry Conference in Tampa

“Fundamentally, they want to start deployment of the first unit around spring or summer of next year,” Cohen told National Defense. “This will reshape all infantry warfare in a way that hasn’t changed since the early 1960s.”

The first delivery order is worth $20.4 million and will include 25 XM5 Rifles and 15 XM250 Automatic Rifles and ammunition that will undergo testing, Col. Scott Madore, the Army's project manager for soldier lethality, told reporters last month during a media event.

Both fire 6.8mm ammunition, an innovative bullet that is faster, more lethal and has greater accuracy than what is currently used by the Army, Cohen said.

Steve Rose, executive vice president at Sig Sauer, added its 6.8mm caliber ammunition is where the key innovation is.

Cohen explained that historically, increasing the lethality and speed of a bullet required manufacturers to also increase cartridge size to accommodate for the increased pressure needed to shoot. Additionally, the weapons would also have to get bigger and heavier.

Sig Sauer developed a lightweight metallic casing to pair with 6.8mm ammunition already designed and manufactured by the United States. This allows a cartridge to withstand more pressure than conventional ammunition, resulting in greater velocity and accuracy without having to make the weapon physically bigger, Cohen said.

The design solves lethality and range challenges the Army has faced while using the M4 carbine and M249 Squad Automatic Weapon, he added.

At about two-thirds the weight of the M249 machine gun, Sig Sauer’s XM250 Automatic Rifle is much lighter than what soldiers have been carrying, Cohen said. However, the company did have to make the XM5 Rifle heavier than the M4 carbine, although Cohen ensured they did so with the least amount of additional weight possible.

Another key design element of the next-gen squad weapons is their similarity to what they’re replacing, said Jason St. John, director of government products at SIG Sauer.

“We thought it important to give them an [automatic rifle]-style weapon system if we could,” St. John said, referring to the XM5 Rifle. “The soldiers would embrace it easier, but the Army would also embrace it because the training curve to implement that weapon system is now almost non-existent.”

St. John also said the capability provided by the 6.8mm ammunition allowed the company to develop the XM250 Automatic Rifles without having to extend the barrel beyond the requirements from the Army — keeping it similar to belt-fed machine guns in platoons.

In all, the contract calls for a total of 400,000 weapons and 1 billion rounds of ammunition from Sig Sauer, according to the company.

That would include 107,000 XM5 Rifles and 13,000 XM250 Automatic Rifles for the Army’s entire close combat force, Brig. Gen. Larry Burris, commander of the Army’s infantry school at Fort Benning and director for the soldier lethality cross functional team, said last month during a media event.

Competition to produce the next-gen squad weapon began in 2017 and included a rigorous 27-month prototyping and evaluation effort of tests and soldier feedback. Although multiple companies fought for the lucrative contract, it came down to Sig Sauer and a team of LoneStar Future Weapons and BerrettaUSA in the final stages.

The weapons will be paired with the XM157 Fire Control, a ruggedized advanced fire control system that increases accuracy and lethality for the close combat force, made by Vortex Optics.

Re: First Soldiers Will Get Next-Gen Squad Weapons in 2023

The XM5 is not a "minimal" increase in weight. It's 25% more. This article talks about a 2lb increase. https://www.army.mil/article/256697/ngsw_signifies_an_evolution_in_soldier_lethality

In other words, troops get a longer, heavier weapon, and 35% less ammunition, because after every firefight, all involved say "I wish I had started with less ammunition".

A 6ARC-type round, with increased pressure, in an M4 sized/weighted rifle might have been an improvement. This is full circle on the M14 to M16 evolution. Except this is devolution.

This is a huge waste of money. Most engagements will still take place within 300 yards. We don’t need a rifle designed to engage targets at 600 yards. Our military is supposedly preparing for an era of great power competition. We will have to work with our NATO allies but will not be able to use the same ammunition. The 6.8×51 will not give our Soldiers overmatch on the battlefield just less ammunition and a heavier load. The enemy will just attack us with a 12.7mm machine gun instead of a 7.62×54 machine gun. A 40mm missile like the Raytheon pike missile with airburst might help but it will be tactics, combined arms or multi-domain effects, and working closely with our allies that will give us overmatch. If the Army wants to improve small arms, then we should focus on a improved projectile and composite case for the 5.56x45.