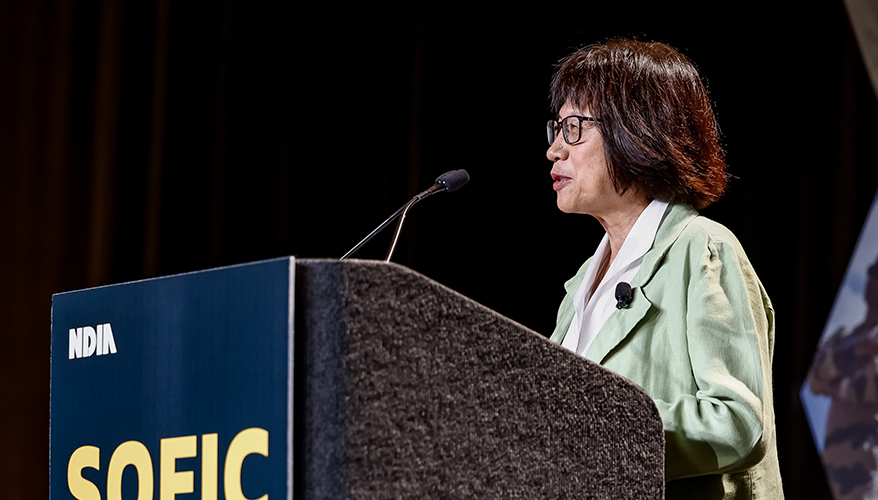 TAMPA, Florida — Undersecretary of Defense for Research and Engineering Heidi Shyu announced on May 18 a new fund that will help startups  do business with the Defense Department.

The “strategic capital” fund will mimic venture capitalists who help small businesses and startups take their products over the finish line when they are running out of money, Shyu said at the Special Operations Forces Industry Conference, which is organized by the National Defense Industrial Association.

“I have heard from a number of small companies that have created really innovative ideas. They just need some additional help getting capital,” she said.

The fund may help startups bridge the so-called “Valley of Death,” where good ideas and technologies — even though they receive initial government funding — fail to make it into the hands of warfighters. The reasons for these dead-ends are many. Sometimes, there is no program willing to adapt the technology and transition it to a contract.

Companies have also complained about the slow pace of government payments. Other times, the startup runs out of money right as its product is on the cusp of the prototype stage. “They just can’t get to the next tranche,” Shyu said. “This is crazy.”

She is appointing a strategic capital director, whose job it will be to step in and help these small businesses make their payroll and survive until they can finish the work they began, she said.

This works in the private sector. If a startup has a good product that will be in demand, they go to venture capitalists who can provide the needed funding, she said.

“One thing I want to do is take that process and methodology, which has been very successful, and bring it across the DoD,” she said.

Her office has also received $100 million in the last budget for the “accelerate the procurement and fielding of innovative technology” program to help companies make it from phase-two to phase-three funding in development contracts, she said.

Making it to phase-three funding is often difficult because that’s where program managers want to transition to manufacturing. Often the small business are not prepared to scale up production, she said.

“This money is set aside to help them move out expeditiously,” she said.

She has identified a point person in her office to lead the effort and instructed him to cut red tape and make sure the process for applying for funds is streamlined.

I have promoted numerous ideas from small arms manufactures that I have discovered, and believe they will work with military and law enforcement. My company works with all major firearm's manufactures ensuring they are compliant with all ATFE requirements. This provide me access to numerous new concepts that I can bring to the attention of the military . Unless you are connected to diplomat or a retired general there are too many blocks getting the idea viewed.