Boeing Gears Up to Replace B-52 Engines 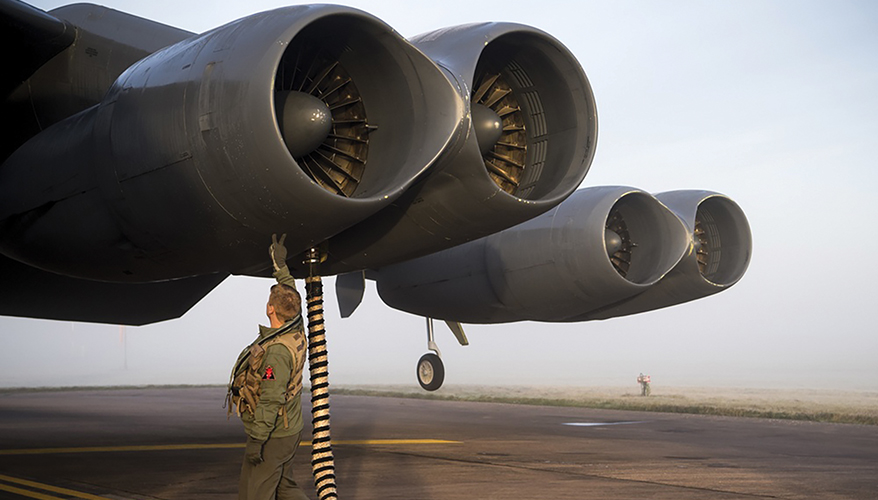 ORLANDO, Fla. — Boeing is racing against the clock to replace the engines of all 76 of the Air Force’s B-52 Stratofortress long-range bombers.

Last fall, the Air Force selected the F130 engine made by Rolls-Royce North America for the B-52 Commercial Engine Replacement Program, or CERP. Under the $2.6 billion contract, Rolls-Royce will equip the B-52 fleet with eight engines each by September 2038, replacing the bomber’s aging Pratt & Whitney-made engines.

Robert Gass, strategic development and investment manager at Boeing, told reporters during the Air Force Association’s annual Air Warfare Symposium in Orlando, Florida, that the life of the bomber’s current engine — the TF33 — is a pacing concern.

“Pratt & Whitney made a great engine that has served the B-52 very well, but it is approaching the end of its life and we have to act now in order to keep the B-52 viable,” he said.

With the F130 engine, Gass added, Boeing expects the B-52 to have an increased range and more endurance, as well as provide the Air Force with additional operational flexibility — especially in areas of the world with few U.S. bases.

Digital engineering will help speed up the F130 engine’s integration into the B-52, Gass said. Using digital engineering, Boeing and Rolls-Royce have streamlined the new system’s design and created 3D models of the B-52 and its components in order to understand how each part works together, he said.

“It’s very early in the program, but we have anecdotal evidence that we’re identifying disconnects and conflicts earlier than we would have otherwise,” Gass said.

Candice Bineyard, director of Rolls-Royce Defense Programs, added digital engineering is being used to understand how the B-52’s new engine will remain sustainable through the 2050s, when the Air Force plans retire the aircraft.

“In the event of small maintenance activities and things that will have to take place, we’re using our digital now and we’re starting to work through and visualize how we’ll create those maintenance manuals to better help those maintainers when we are into the production phase,” she said.

At the same time, Gass noted the engine’s modernization will allow Boeing to upgrade the B-52’s subsystems so that it stays up to date until the 2050s. This includes electrical power generation, pneumatics, new structures for the engine pods, new cockpit displays and digital engine controls, he said.

During the test, the team will “get an opportunity to understand exactly how that engine is going to operate as intended,” she said.

Re: Boeing Gears Up to Replace B-52 Engines

I would imagine, 8 engines is for redundancy.
4HE9H

Seems silly to replace 8 old engines with 8 new engines -- in the modern world, 4 high-bypass turbofan engines could easily do the same job. Why don't they just remove the whole 2-engine pylon assemblies, and replace each with a single-engine pylon, and have a simpler, cleaner, modern, 4-engine aircraft?

The B-52 is used to drop or launch a large variety of weapons and test vehicles, all of which have been certified, partly, on the known aerodynamics of the regions of airflow around the bomber. So, it makes sense to preserve the known parameters. If RR can fit the new engine into the existing nacelles then so much the better.

picking rolls guarantees that at least one major requirement will be ignored. since boeing is buying it will not be tested. USAF gets short shrift again.

Re-fitting brand new engines on the BUFF is an excellent idea to extend its life. During the 2050s when the B52s come to the end of their service life, I hope that USAF will consider building B52s again, since they are a wonderful aircraft.

I wish that the Australian Government would consider a fleet of brand new B52 aircraft for the RAAF, and have talks with American Congress and Boeing about this. B52s would be great for Australia's defense.

This should have been done 30 years ago. There was a plan to use 4 B-757 used engines per aircraft. It would have given the BUFF even better performance than the current 8 engine plan.
The reason it wasn't done is the Generals were objecting to the change in the looks of the aircraft.
A big bunch of babies.
I don't buy the engine out theory.

The reason RR was used was they already had a proven efficient engine in there portfolio that delivered the necessary power requirements. So the Air Force saved a ton of money. Plus it is important to note the the engines will be dialed down because the air frame could not handle the additional power increases. I think it is a smart improvement on the air forces part.

James Parker at 2:41 PM
Re: Boeing Gears Up to Replace B-52 Engines

They have to go with 8 engines, any changes to the original design wouldn’t work . Think about how it would affect torque, weight distribution, etc .Modernizing the BUFF , makes sense . Doing the same with B-1B makes sense as well. They’d be ideal for AIR to Air missile truck with long Range AIM130 120D or surface strike on ships with NSMs, Tomahawks .

James Thomas at 9:46 PM
Re: Boeing Gears Up to Replace B-52 Engines

Its not possible to replace all 8 with just 4. It tried and failed in the 1980s I believe. That must thrust for the design of the wings began ripping them off and they had to scrap the idea. Main reason the are sticking the 8 engines. And thats the main reason they have external tanks on the wing tips. Its to keep the bird flying cause if they were empty, it would literally rip the wings off. Just my knowledge from working on them for 10+years

4 engines, the diameter of each would be much bigger. Much of the structure would have to be altered, e.g. the height of landing gear and size if landing gear wells. No possible with the existing airframe.

Matti Kinnunen at 6:31 PM
Re: Boeing Gears Up to Replace B-52 Engines

It's economics to replace the existing eight engines because of the expense of replacing with four. A lot of wiring and controls would be needed and redesigned
flight controls. But Rolls Royce engines have always been trouble.

8 engines because migrating to a 4 engine set up would mean a major re-engineering exercise strengthening/replacing wings. It would also impact on the centre of gravity causing issues with flight stability, the design of new pylons with greater load bearing and a redesign of the fuel system.

Sticking with 8 engines, designed to be broadly similar to the existing designs but a lot more high tech and efficient is the most cost effective way forward

Mr Andrew J Poulton at 1:49 PM
Re: Boeing Gears Up to Replace B-52 Engines

Why don't they pull out the prints for the B-52, update and build a few dozen new ones?

I hope that P&W had a chance to bid on this contract. Having designed and developed an engine that lasted over 70 years, in service to our country, that would have been the right thing to do. Further, it looks like some of the current engines will have to last until 2038. This kind of a track record should mean something.

Likely that P+W/GE didn't have the engines to suit a retrofit. Since the RR engines will run at a lower performance rate, they should last longer as well. I presume the B52's will either operate as "mobile" ICBM /Anti-Satellite platforms or as honeypots while the stealth bombers sneak in. I'd not be surprised if the 30% fuel saving is not higher, allowing for longer flights. The parts saving should be huge. I do wonder if hypersonic SAM systems do not render the B52 obsolete in a hot war against China/Russia even with their jamming updates. Even with the new engines, the B52 is an easy target and there is a limited no of them and hypersonic SAMs are so much cheaper (and can also be made mobile)

8 vs 4 engines. Rudder would have to be redesigned to account of the larger asymmetrical thrust in case of outboard engine out.