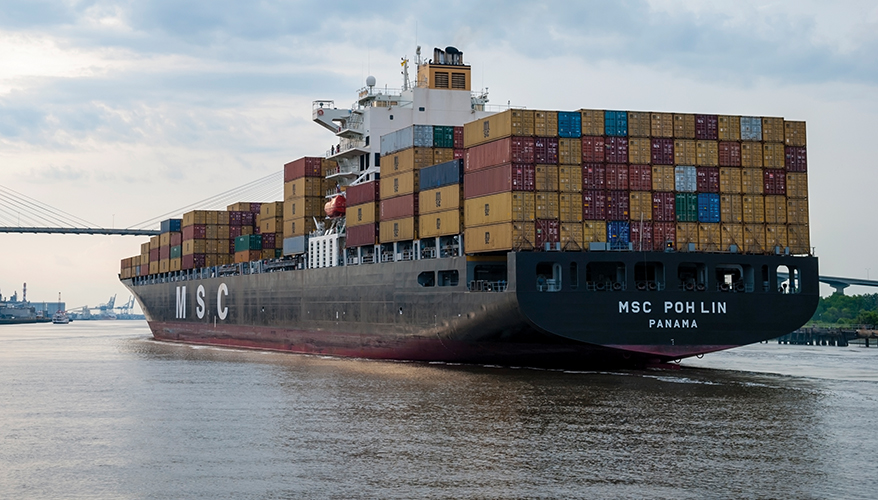 NATIONAL HARBOR, Md. — A nationwide labor shortage and problems with the supply chain continue to disrupt the delivery of materiel to the military and its industry partners, logisticians at a recent conference said.

As the United States seeks to send weapons and goods to assist Ukraine, Marine Corps Maj. Gen. David Maxwell, vice director of logistics at the Joint Staff, said obsolete parts and limited capacity on production lines are two challenges the Pentagon is facing.

Some factories “are clearly not postured to be able to be on a war time kind of rapid building and manufacturing scale that we are finding ourselves in,” he said during a panel at the Sea-Air-Space conference at National Harbor, Maryland, recently.

That’s not “across the board,” he said, but it does effect “very unique” items that he didn’t name.

Kurt Wendelken, vice commander of Naval Supply Systems, said the COVID-19 pandemic did bring supply chain issues to the fore for consumers, but the military has a different set of problems.

“The products that we’re dealing with are very complicated. They’re not Pert shampoo. They’re not Snickers. They’re not things from Amazon … It can take [industry] a year or two years to go make those things for us. And that’s assuming that they understand what our demand signal is,” he said.

About 80 percent of his command’s suppliers are “single-source,” meaning there is no other company that can produce the item.

Exacerbating the lack of materials and goods is a labor shortage.

Abby Lilly, vice president of the global supply chain for Lockheed Martin Rotary and Mission Systems, said when “you think about the great resignation that has happened in this country in the last several months — and the number of people who have left the workforce — that is impacting the defense industrial base.”

She has heard of 15 percent to 20 percent turnover in recent months at some of the defense industry giant’s suppliers.

“Those companies are struggling to hire new workers to train them to do what we need to do,” she added.

“Labor availability is one of the key things that we’re concerned about in the defense industrial base,” she said.

The other problem is some of the company’s sub-suppliers’ lack of alignment with the defense sector.

Companies that were established in technology boom of the late 1990s and 2000s are not necessarily 100-percent in tune with Defense Department needs as they make nonmilitary items as well, she said.

Yet they are manufacturing items that are critical to the Pentagon’s goal of creating a connected battlefield, she said.

“That’s something that keeps me up at night and has given me a few gray hairs,” she said.

Sal Mercogliano, associate professor of history at Campbell University in Buies Creek, North Carolina, likened the current disruption to shipments to what happened in the World Wars.

“The impact of COVID — and then a myriad of other issues — have just created waves through the supply chain crisis that are being felt by everybody right now,” said Mercogliano, who also teaches courses on maritime security.

“I think what’s happening in the supply chain on the civilian side has really impacted our military’s ability to perform our missions to get the supplies we need to contractors,” he added.

Part of the problem are port delays, he said. But infrastructure problems with U.S. waterways infrastructure pre-date COVID-19. He pointed to a Federal Maritime Commission report, “U.S. Container Port Congestion and Related International Supply Chain Issues: Causes, Consequences and Challenges,” which was released in 2015.

About 90 percent of the problems the report predicted have come to pass, he said. That has led to the images of container ships stacked outside of ports waiting to unload.

This has potentially dire consequences for the military, he said.

“What are the implications if we have to go out of the country for a military operation or a contingency operation? Can we surge out when we’re having difficulty surging in?”

As for the labor shortage, Wendelken said the military must do a better job of communicating what it needs to suppliers.

“Do they understand my demand pattern? Am I making my demand pattern more predictable so they can keep their workforce gainfully employed, so they don’t go off and look for another job?” he asked.

“I think in the past, we were very transactional. We didn’t really engage with industry,” he said. The service would issue a requirement for something, acquisition personnel would go to industry and get the requirement filled.

“What we have learned by benchmarking world-class organizations is that we really weren’t very good customers,” he said. Part of the solution is to have candid and open conversations with key suppliers.

The Navy now regularly engages with its top 50 suppliers to let them know what the service might need in the future, he said.

The service is working on its Naval Sustainment System-Supply program, a multi-year plan that kicked off in 2020 to streamline and take control of the service’s supply chain, Wendelken said. That campaign is “making good progress,” he said.

The company has accelerated payments every week to them since April 2020 — an average of about $430 million a week — to ensure those companies remained stable.

“We tried to make sure that we target that cash to the right places,” she said.

Like the Navy, many of these small- or medium-sized businesses are single source suppliers, she added.

Maxwell said the Defense Department needs to have visibility into the supply chain.

The “supply web is only effective if you’re actually able to see what’s on it, where it’s at and what options you have to move and maneuver,” he said.

The “resilient, integrated logistics command and control concept” calls for the Pentagon to have better insight into the supply chain. If an item is taken out of a node, logisticians can understand where they can find alternative sources, or alternative methods of delivery if needed, he said.

Cybersecurity must also be part of supply chain resiliency as logistical information travels through both commercial and protected military networks and must be protected, he added.

Mercogliano said a massive cyberattack on the supply chain could be devasting and brings up a more dire scenario: What if someone tries to disrupt supply chains on purpose?

Maxwell responded that “we are living in a contested logistics environment today,” citing all the myriad problems mentioned.

However, it calls into question: “What real capacity can we bring to bear in a contested environment where you have an adversary that is also trying to disrupt what you’re doing?" he asked.

“It’s requiring us to start thinking about the ability to be able to distribute and deliver in faster and smaller force packages than what we’ve traditionally thought about and traditionally done,” Maxwell said.

Wendelken added: “We don’t have the luxury of 20 years to get this all squared away and corrected, so I think our continued engagement with industry is critical.”

Mercogliano said, “Every time we try to get a handle on [the supply chain issue] — and we think we’re coming back down from it — the next black swan event hits us,” he said.

“There is obviously a flock of these black swans because they just keep hitting one after the other,” he added.