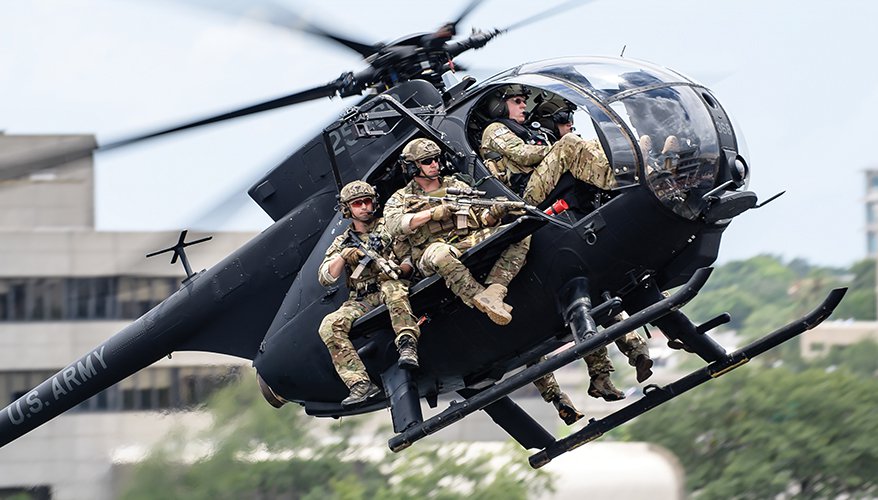 Special Operations Command’s A/MH-6 Little Bird — affectionally known as the “Killer Egg” — made its debut into the American psyche following the release of the classic book and movie “Black Hawk Down.” In it, Little Birds ferry commandos in the besieged city of Mogadishu, Somalia, and sealed the helicopter’s place in pop culture history.

Hollywood aside, the now iconic aircraft — originally developed by Hughes, which was purchased by McDonnell Douglas, and now manufactured by Boeing — has been a mainstay in Special Operations Command’s inventory for decades, offering commandos a niche capability not found in other air platforms. The helicopter’s small size, agility and speed make it an ideal rotorcraft for getting in and out of hairy situations, experts say.

The exclusive user of the aircraft is the 160th Special Operations Aviation Regiment — also known as the Night Stalkers — out of Fort Campbell, Kentucky. The mission set for the A/MH-6 are light attack and light assault, respectively.

The platform offers special operations forces two hours of flight time, has a maximum cruise speed of 126 knots, a range of 179 nautical miles, and a maximum service ceiling of 20,000 feet, according to Boeing, which declined to be interviewed for this story and referred questions to SOCOM.

Despite the platform’s success, the Little Bird — based on the OH-6 introduced in the 1960s — continues to age. So what is in store for the future of the Killer Egg?

For one, Slinker says the platform isn’t going anywhere. So far, no requirements have been put forward to replace it.

“There is no definitive plan to end the service life of the Little Bird,” he said. “The H-6 platform was officially introduced in 1966. While the majority of these aircraft were eventually phased out of service, ARSOA identified a significant utility in keeping the airframe in service. With continued maintenance and upgrades, there is currently no service life end in sight.”

These upgrades consist of a “zero-time” aircraft primary structure, he noted.

“Zero-time refers to the amount of time on the aircraft at upgrade,” Slinker said. “As with many military vehicles, ‘new’ doesn’t always mean new. For example, previous iterations of upgrades to the H-6 platform required modifications to an airframe that may have been 40-plus years old. Zero-time means the structure of the aircraft will be ‘brand new’ off the line with no flight time logged.”

Special Operations Command is currently fielding these upgraded aircraft at a rate of seven systems per year, he said.

However, there has been some discussion in the helicopter community that the aircraft could one day be replaced by a platform developed by the Army’s Future Vertical Lift, or FVL, family of systems — particularly the future attack reconnaissance aircraft. The service has been working for years to develop a new set of rotorcraft that can replace its aging Chinook, Black Hawk, Apache and Kiowa Warrior platforms. Sikorsky and Bell were selected by the Army in 2020 to build systems under the FARA effort. Sikorsky is offering its S-97 Raider and Bell its 360 Invictus, according to the Congressional Research Service.

However, Slinker threw cold water on the idea that FARA could replace the Little Bird.

“There has been no aircraft proposed under FVL so far that replaces the current aircraft for the light assault role required by SOCOM,” he said.

The main challenge for an aircraft like FARA or another in the FVL family is finding a platform that is “small enough, maneuverable enough, transportable enough and simple enough to conduct the light assault/attack role of the A/MH-6,” he said.

Aviation expert Richard Aboulafia, managing director of AeroDynamic Advisory, an Ann Arbor, Michigan-based aerospace consulting firm, said that while technically conceivable, replacing the Little Bird with the future attack reconnaissance aircraft would be unlikely because the platform would be too big.

“Even if FARA goes ahead, I just don’t see it producing anything relevant for this. These are really small, small agile machines,” he said.

“Nobody’s designing a new one.”

A tiltrotor platform would be unfeasible for SOCOM, he said.

“That’s the exact opposite of what these guys want for this mission,” Aboulafia said. “Good luck flying through buildings and chasing cars.”

While there once was a civil market for the Little Bird, the platform has since been replaced by inexpensive light turbine aircraft such as the Robinson R66, Bell 505 and the Airbus H125, Aboulafia said.

Those “really don’t have the power and agility of the Little Bird,” he said. “Maybe they could be up-engined and re-transmissioned and whatever else, but why?”

With a new aircraft likely not on the horizon, Slinker said SOCOM will be focusing on upgrades to the platform.

The platform currently carries weapons such as multiple calibers of machine guns, the full family of 2.75-inch rockets as well as laser-guided munitions, he noted. Currently, there are no plans to integrate new weapons onto the platform.

But with the Pentagon shifting its attention to great power competition with Russia — which recently launched an unprovoked war with neighbor Ukraine — and China, will the Little Bird play a role?

Slinker said: “There is always a need for the unique light attack/assault aircraft role” that the platform offers users.

However, Aboulafia believes the Killer Egg’s role will be limited.

“They’re just not for great power competition,” he said. It’s not relevant in terms of range, deployability and battlefield survivability, he added.

However, the aircraft will likely continue to be a mainstay in SOCOM’s inventory for years to come, Aboulafia said. With an active production line available, Special Operations Command could replace small numbers of platforms or engage in block upgrades.

“SOCOM has a few dozen of everything,” he said. “You never know when there might be a contingency.”

The pricey aviation items that often eat up Special Operations Command’s budget are on the other side of the spectrum with the Little Bird, he noted, including CV-22 Ospreys and MH-47G Chinooks.

“That’s just a monstrously different order of magnitude,” Aboulafia said. “Even if you wanted full up, replacement Little Birds, … you’re talking about maybe $5 million an aircraft … as opposed to the $70-something-million for a CV-22.”

He added: “They’re cheap and cheerful. So why not have them on hand?”

“Every so often you find aeronautical niches that are built that way,” he said. “You just sort of stake out this position [and] no one really comes after you in any meaningful way and you defend it.”

This story has been updated to note that the original H-6 platform was developed and produced by Hughes, which was later purchased by McDonnell Douglas.

Re: The Future of SOCOM’s ‘Killer Egg’

The Army phased out Kiowas years ago, anyone with half a clue about military aviation knew that. The title is clickbait trash.

Great article,but the H-6 started with Hughes Helicopter, just like the AH-64 Apache. Hughes was bought by McDD then by Boeing.

Did SOCOM look into the MD Helicopters' Twin-Engine 969? 969 can haul passengers inside, has an armament plank, FLIR, and can house six ATGM, troops, or drone tubes inside. It has an all-glass cockpit and over twice the range of the AH/MH-6 AND can have cabin machine guns as well, something the MH-6 cannot do because the SOFs sit on planks on the outside. MD969 might not fly as high, but who would want to fly a AH/MH-6 to 20,000 feet with open doors?

I personally think that the MD969 NOTAR is better and I am stunned that USSOCOM didn't explore this because they seem to be "missing out" on a great little attack helicopter that can do AH/MH in one. Then again, SOCOM doesn't admit to what they want to buy in the future many times anyway.