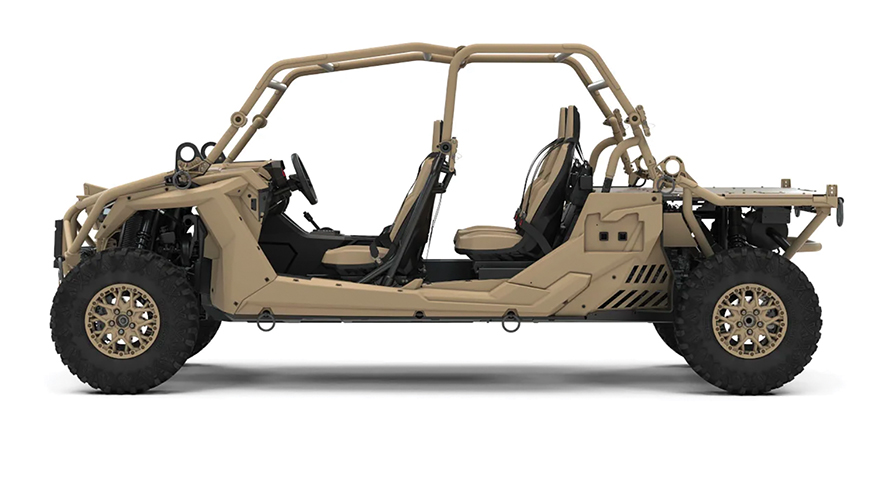 One vehicle in the concept stage includes the purpose-built non-standard commercial vehicle, which is being pursued through an other transaction authority prototyping effort, Romero said.

“The idea of this vehicle platform was to build a vehicle from the ground up on the chassis, with the ability to change out the skins,” he said.

The command is designing the platform to have an extended service life with the ability to traverse longer distances.

Special Operations Command has recently completed some tests with the vehicle and is currently waiting for the results to come in before making its next move, Romero said.

Meanwhile, the Joint Light Tactical Vehicle, or JLTV — which is being developed through a joint program office for the Army and Marine Corps — is another project in the concept stage. The platform is a service-common vehicle being provided to SOCOM components, Romero said. In fiscal year 2023, the command will begin applying special operations forces-specific modifications.

Part of Special Operations Command’s acquisition strategy is to leverage platforms from the services, he said.

Whatever the Army and Marine Corps provides is “good enough for SOF,” Romero said.

The command then applies SOF-peculiar modifications to the platforms which offers users greater flexibility, he added.

Upcoming milestones include a SOF command, control, communications, computers, cyber and intelligence, or C5I, integration kit which will be tested in fiscal year 2022, according to slides shown during Romero’s presentation.

The JLTV will be one of SOCOM’s newer vehicles and will be a workhorse in the fleet, he said.

The command is also pursuing a hybrid-electric ground mobility vehicle 1.1 system. A prototype platform is expected to be completed by July and the command will then commence testing, Romero said.

Meanwhile, platforms in production include the light tactical all-terrain vehicle, which is a SOF-modified commercial-off-the-shelf system that can be internally air transported via V-22, H-53 and H-47. The platform includes two- and four-seat variants. It can perform missions such as offset infiltration, reconnaissance and medical evacuation.

The command is using Polaris’ MRZR Alpha for the vehicle, Romero said. The program is a collaborative effort between Special Operations Command and the Marine Corps.

“We are sharing the same common vehicle baseline,” he said. The platform is known as the ultra-light tactical vehicle within the Corps, he added.

Moving forward, areas of interest for the vehicle include integrating autonomy packages, signature management systems and inserting a communications suite, he said. There is also interest in electrifying the platform.

The LTATV was slated to complete performance testing in March, according to Romero’s slides.

Meanwhile, the service is sustaining its fleet of mine-resistant, ambush-protected vehicles as well as its ground mobility vehicle 1.0 and 1.1 platforms, he said.

In general, as SOCOM looks forward, it is seeking lightweight armor for its vehicle fleet, he said. Current armor solutions are heavy and limit the available payload for users, as well as decrease the platform’s durability.

The command is also looking for new signature management technologies, he said.

“That is a big topic for us,” Romero said. “How do we do signature management on the move?”

Hybrid-electric technology is another area of interest, he said. “Anything that we can do to create that extended range and also that silent watch … we’re all in on that.”

At some point, the SOF community may need to temper some of the constant tweaking budget that they can replace, and replace, and replace, everything on 5 year terms. The reality of them not being to dune buggy around Russian/Chinese and for that matter Iranian type forces out there may necessitate the Pentagon giving out more $$ to the regular Joe's. It's a disgrace we can't even do a full brigade of Abrams to upgrade to latest standard annually, but we have seen plenty of Flyer vehicles and upgrades to that, as well as all the stuff the airborne/AA/Mountain teams are getting. This on top of going through more varieties of rifle and sniper weapons in 15 years than regular Army and Marines change out in 20 years. They should worry about getting their next light aircraft for support and as for the Marines, well the whole path forward may change radically in say 2 years or so, as this Pacific or nothing, and really Islands or nothing, mentality is going to expose them to needing more heavy units for the mainland. If China shifted its focus to mainland Asia, what next for the Marines? More cuts or putting back tanks? Imperial Japan is a good case study in dispersed forces being isolated, neutralized or destroyed.

I would have liked to be at that SOF conference because National Defense Magazine and SOCOM didn't address the "Golden Nugget" and that is the Pandur I 6x6 replacement which seems to be stalled or covered up with vagueness by SOCOM. No mention of the M-GATORs by John Deere or the new Tesla Cybertruck and its partner ATV, or the Flyer 60 and SOCOM skimobiles. No mention of the LMTV "Warpig" 4x4 FMTV-converted truck or motorcycles and Yamaha 4x4 ATVs.