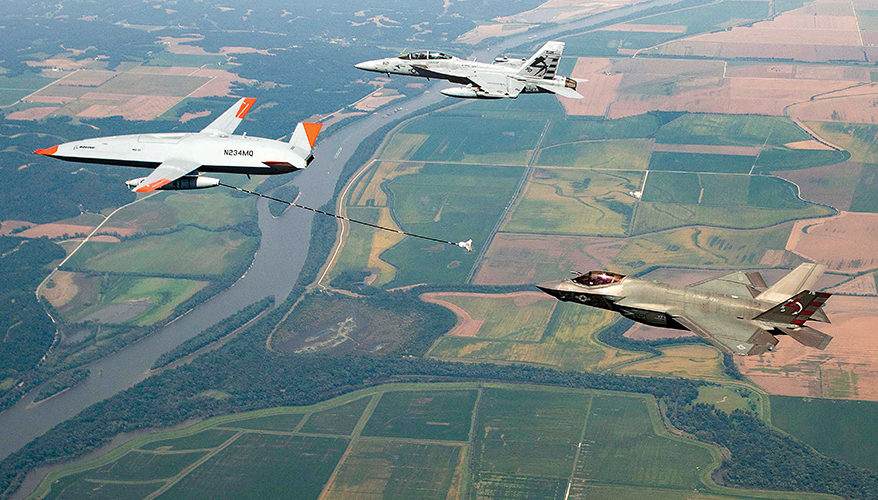 The Navy’s MQ-25 Stingray drone program racked up major achievements over the past year and is on track to usher in a new era of manned-unmanned teaming.

However, service officials are still pondering whether the aircraft carrier-based tanker will be armed with offensive strike weapons.

In 2018, Boeing was awarded an $805 million engineering and manufacturing development contract to build the Stingray.

Experts say the new unmanned aerial system — the first large, fixed-wing drone that will operate from a ship and support manned planes — will have an outsized impact on the future of naval aviation.

“The MQ-25 will establish the basics of operating an unmanned aircraft in the carrier environment, laying the groundwork for all future carrier-based UAS operations,” Capt. Sam Messer, unmanned carrier aviation program manager, said in an email to National Defense. “It will also serve as an early example of manned-unmanned teaming — an operational concept that provides our warfighters with tactical advantages to win the fight.”

Advanced technologies that will support the program and facilitate future missions include a deck handling device, ground control station and communication links.

The MQ-25 will be different from the iconic drones of the post-9/11 counterterrorism wars, such as the MQ-1 Predator and MQ-9 Reaper, in that it will fly autonomously and not be remotely piloted.

The way the platform operates will be similar to how commercial airlines leverage autopilot capabilities — except there won’t be any humans inside the Stingray, said Dave Bujold, MQ-25 program director at Boeing Defense, Space and Security’s autonomous systems division.

“They’re not hand-flying every stick and throttle move,” he explained in an interview. Instead, the Stingray will use a waypoint system after it is catapulted off a carrier.

“It knows where it’s supposed to go right after takeoff, and it goes there. And then from there, it continues all along its authorized mission,” he said.

Aerial refueling will be “well scripted,” and pilots on the receiving end will have communication links with the ground station overseeing the MQ-25’s mission, just like they have with manned tankers today, he noted.

When the Stingray returns to the carrier, it will use the joint precision approach and landing system, or JPALS, which is the same technology that manned aircraft use.

“It autonomously will touch down on the deck and catch the hook on the wire,” Bujold said. If it misses the wire, the platform will accelerate, take-off again and reenter the landing pattern, just as a manned jet would in that scenario.

In June, the Navy and Boeing conducted the first ever air-to-air refueling with an unmanned tanker when the T1 extended its drogue and gassed up an F/A-18 Super Hornet fighter jet.

Both aircraft were flying at “operationally relevant speeds and altitudes,” according to Boeing.

In August, during a six-hour flight test, the T1 refueled an E-2D Advanced Hawkeye battle management aircraft. The platforms were flying at 220 knots and an altitude of 10,000 feet when they linked up, according to Naval Air Systems Command.

In December, another major development occurred when the T1 underwent an initial unmanned carrier aviation demonstration onboard the flight deck of the USS George H.W. Bush.

During the demo, personnel drove the aircraft around the Bush’s flight deck while at sea to check its handling qualities and the functionality and capabilities of the deck handling system. This included taxiing into and connecting to the catapult, clearing the landing area and various other maneuvers, according to Messer.

“The demonstration was very successful and was significant because the Navy has a rigorous, well-established process by which aircraft move around the deck of an aircraft carrier — and the goal with MQ-25 is to maintain current carrier operations cadence for seamless integration,” he said.

Separately, Lockheed Martin showcased a prototype of the MQ-25 ground control station, which provided the Navy with “a unique opportunity to assess design constraints and capture feedback on the human systems interface,” Messer added.

Bryan Clark, director of the Center for Defense Concepts and Technology at the Hudson Institute, and former special assistant to the chief of naval operations, said the demonstration onboard the Bush was “hugely significant.”

“The challenge that the Navy would always bring up is we’ve got to figure out how to make this work on the flight deck,” he said. “The fact that they’re able to now do that and integrate it into kind of a crowded flight deck is a big deal, because that really means that they’ve … completed all the major tasks that are necessary to have the MQ-25 be a viable carrier-[based] operational aircraft.

“They’ve already demonstrated the aerial refueling of various platforms. Now, it’s a matter of testing to make sure it delivers on what the contract requires in terms of its characteristics. … They’ve largely finished the hard part of evaluating autonomy,” he added.

An immediate aim of introducing the Stingray into the fleet is to allow more F/A-18 Super Hornets to focus on fighter missions rather than tanking duties.

Clark said the MQ-25 will provide a major gain in capability because the platform can extend the range of fighter jets to about 1,000 miles. Armed with standoff weapons, those jets could engage targets located 1,500 miles away from the carrier.

“That’s a big deal because … the carrier can probably stay in locations where it’s relatively safe,” he said. “For example, the Chinese don’t have very many 1,500 nautical mile [range] weapons that can come out and hit the carrier. So, the MQ-25 enables the carriers to operate in places where it’s survivable. … It is pretty game changing from that perspective.”

With the Stingray, the Navy aviation community will “leap ahead” of the Air Force when it comes to integrating manned-unmanned teaming into operations, he added. “That’s the big advance that the MQ-25 represents … in how manned-unmanned aircraft operate together.”

The demonstration onboard the Bush completed the planned activities for the T1 prototype. Production of the first engineering, manufacturing and development aircraft is now underway along with modifications to prepare mission spaces, install control stations, and modify existing network, command, control and communications systems to support operational use of the MQ-25, Messer said.

The service will also continue to assess refueling of other carrier-based aircraft such as the CMV-22 Osprey tiltrotor troop transporter.
Meanwhile, work continues with the new ground control station as the Navy moves toward initial ground and flight tests where an MQ-25 will be controlled for the first time from that platform.

Notably, the first group of warrant officers who will be designated as unmanned air vehicle operators are currently in training. After their training is completed, they will be assigned to MQ-25 Fleet Replacement Squadron VUQ-11.

In September, Boeing broke ground on a new high-tech, 300,000 square-foot facility near MidAmerica St. Louis Airport in Illinois where it will build Stingrays.

“That factory is really sized to close on the program of record as quickly as we can,” Bujold said.

The Navy plans to buy more than 70 aircraft as part of the program of record. Boeing hopes there will be additional orders including from potential international customers, he said.

The MQ-25 is scheduled to achieve initial operational capability in 2025, with full operating capability expected in the 2030s.

A key question that has yet to be answered officially is whether the Stingray will be armed with missiles or other offensive systems — as some lawmakers and other observers have been advocating.

When asked if the Navy is currently considering adding strike weapons or electronic warfare capabilities, Messer said the initial focus is to introduce the platform into the air wing where it can serve its primary role as a tanker and then a “secondary” role as an intelligence, surveillance and reconnaissance platform. However, the MQ-25 “does have payload capacity for mission growth in the future,” he noted.

Bujold said getting the Stingray to the fleet as quickly as possible so it can perform tanking missions is “job one.”

However, “I expect that this platform will become a very versatile multi-mission platform, and I think the Navy gave it away when they named it MQ” with the “M” indicating a multi-mission capability, he said when asked if he anticipates additional payloads will be added to the platform such as ISR systems or strike weapons. “It’s an opportunity space.”

Clark said the Navy is already looking ahead to what the MQ-25 could do beyond tanking.

“I think they will put weapons on them,” he said.

With its high fuel capacity, the platform has a range of 1,500 nautical miles. Although it might not be very survivable in a contested airspace or in a dogfight because it wasn’t designed for speed, maneuverability or stealth, the system will be capable of performing offensive missions at standoff ranges or in uncontested areas, he suggested.

The platform could also be used to deploy smaller drones or other “air-launched effects,” according to Clark.

“It has a mission bay and it could carry weapons” such as anti-ship missiles, Clark said. “You could add sensors to it. … You could use it to hit fixed targets, or just do surveillance and target acquisition on behalf of other platforms. So, the Navy is looking ahead at how the MQ-25 — once it’s integrated with the air wing — can offer these other capabilities.”