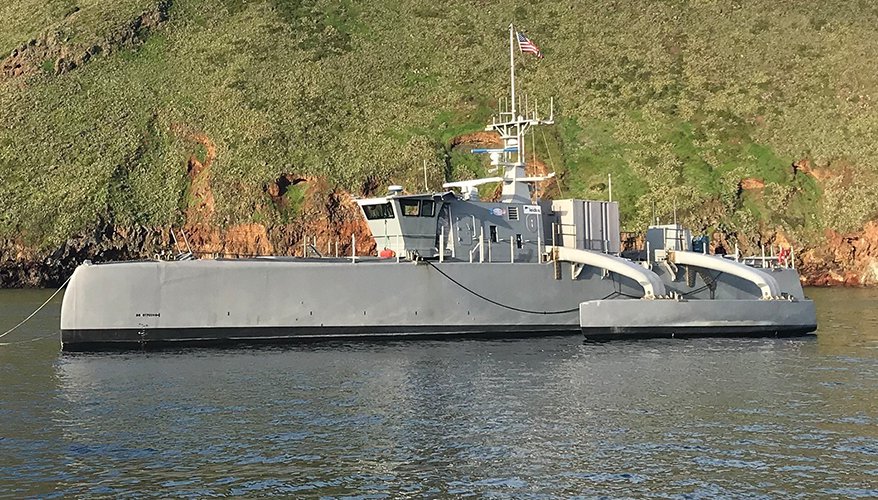 Unmanned systems have become ubiquitous throughout the military, but the key to their continued success will be new and more powerful autonomy capabilities that make up the guts of the platforms, officials say.

The Navy — which is pursuing an ambitious unmanned systems plan through a mixture of air, surface and underwater platforms — is working to test and mature those autonomy systems through multiple programs.

These include efforts such as new autonomy standards as well as the standing up of its Rapid Autonomy Integration Lab, said Capt. Pete Small, program manager for unmanned maritime systems at Naval Sea Systems Command.

Updating legacy platforms with new autonomy software codes can be an arduous process, he said during a briefing at the Surface Navy Association’s annual conference. To combat that, the Navy is developing an autonomy standard for code development called the unmanned maritime autonomy architecture, or UMAA.

UMAA defines a standard for common services and how developers can package information for a more modular set of codes that can support the advancement, maturation and integration of new autonomy packages, Small said.

It “standardizes the interfaces between the software components in an autonomy baseline on any vehicle, and therefore provides the ability to not only reuse the software on upgraded versions of the same platform, but across platforms and programs without wholesale rewriting all of that code anytime we want to integrate a different sensor or add a different autonomy capability,” he said in an interview.

The Navy has been working on the architecture for the past two years, he noted. It has collaborated with the defense industrial base throughout the process and regularly hosts industry days to gather feedback.

That standard will continue to evolve and mature over time, he added.

The Navy has already begun incorporating the architecture into recent autonomy platform contracts. “There’s been enough runtime that industry and government and academia … have all become familiar with it,” he said.

So far, Small’s office has received positive feedback from both large and small companies, he said.

“Industry in general has been very supportive of our efforts to standardize autonomy,” he said. With a common standard, there are “a lot more vendors and a lot more opportunities for increased industry participation.”

UMAA is critical for the Rapid Autonomy Integration Lab, which was established in 2020.

“We wouldn’t be able to do RAIL if we didn’t have a standard for code development,” Small noted.

The architecture serves as the basis for the lab’s modern software development environment to integrate different vendor and government code, as well as test and certify code as it is deployed on platforms, he said.

In 2020 and 2021, the service executed a pilot program in support of the integration lab where it “wrung out” a process to test and deliver software, he said. Officials used an existing medium-sized unmanned underwater vehicle from an industry partner over the course of the pilot, and the system featured its own vendor-made autonomy code.

The Navy then integrated an Office of Naval Research-developed fuel gauge autonomy capability into the platform, he said.

“That pilot program really allowed us to flesh out the different roles and responsibilities and tools and processes that we needed to stand up a fully developed RAIL capability,” Small said.

Moving forward into 2022, the office is beginning to put out some of the first solicitations for industry participation in the lab, Small said. The first contract is known as the autonomy baseline manager.

That is a “supporting role to help us run the overarching RAIL process and manage software baselines, … [as well as] supporting the other service providers and partners that are working in the RAIL environment,” he said.

Small’s office has put together a draft solicitation and is in the process of gathering feedback through industry days. Officials expect to release the solicitation later in 2022.

Additional solicitations are in the works, but Small declined to share what they are and when they would be released.
Meanwhile, the office is expanding its workforce.

“[We] need to reorganize a bit and beef up our government program office roles to help oversee and manage the overarching RAIL process,” he said. “We’re in the process of … [increasing] our programmatic staff and hiring additional government people who have expertise in modern software development processes and tools to help us oversee those efforts.”

The office is still determining what the right number and composition of its workforce will be, Small said. “We’re still trying to figure out what that baseline level of support to run the RAIL is. That will increase over time as the usage goes up.”

Meanwhile, as the Navy continues to develop new autonomy systems, it recently stood up a new facility to test unmanned maritime vehicle technology in December 2021. Located at Naval Base Ventura County Port Hueneme, California, the new facility will accommodate testing, evaluation and demonstration of prototypes such as extra-large unmanned undersea vehicles and unmanned surface vessels, according to the service.

“We needed a place to do test and evaluation of the larger unmanned vehicle prototypes that we were bringing online,” Small said. “We looked around and we did studies, and Naval Base Ventura County was a really great choice for a number of reasons.”

The location has enough space to support large unmanned underwater vehicles, access to deep-water instrumented ranges in California, intermodal expeditionary transportation capabilities, proximity to Navy and industry hubs, and synergies with other commands, he said.

RAIL and the unmanned vehicle testing facility will work closely together, he noted.

The demand signal for changes to an unmanned system’s autonomy code will come from the surface fleet user community and the undersea user community, Small said. Both organizations will be co-located at Naval Base Ventura County.

The facility will allow the integration lab to make improvements to autonomy codes much faster, Small noted.
“Having a test site where we can operate full scale vehicles and do full scale on-water integration” of unmanned systems is important,

Small said. “Having all of those things together at one site with the operators, the developers and the facilities to do that test and evaluation is really going to allow us to get after and identify and fix whatever … limitations are” discovered.

Meanwhile, other naval organizations are making headway in the testing of unmanned systems. The Navy’s Fifth Fleet — which operates in the Arabian Gulf, Gulf of Oman, Red Sea and parts of the Indian Ocean — recently stood up Task Force 59 to integrate new and promising AI-enabled systems to enhance maritime domain awareness and bolster deterrence.

“The reps and sets you get out of having an organization that is focused only on this … cannot be understated,” he said during remarks at the Center for Strategic and International Studies.

There are currently two hubs for the task force, with one in Bahrain and the other in Jordan, he noted. The organization is largely focused on testing unmanned surface vessels.

The Navy has operated unmanned aerial systems for years, “but the USV technology piece has not always been there,” Cooper said.

“It’s there now. We’re taking advantage of it.”

Last summer, the Navy brought together a team of 14 different organizations — from inside and outside the government — to assemble the task force, he said.

“That really postured us for success,” he said.

One of those groups includes the Navy’s secretive Project Overmatch team, which is the sea service’s contribution to the Defense Department’s joint all-domain command and control effort.

“We’ve been with them from the start,” he said.

Unmanned systems deployed at sea can act as sensors, increasing the Navy’s maritime domain awareness, he said. However, with that comes a glut of information.

“The only way to sort that out and be able to use it in a meaningful way is through artificial intelligence,” Cooper said.

The Navy has been working with manufacturers to test new technologies, including firms such as Saildrone and MARTAC under a contractor-owned, contractor-operated model, he noted. “It’s serving us well and we’re moving quickly,” he added.

Cooper noted that the task force has been gearing up for the Navy’s biennial International Maritime Exercise ’22 — the largest unmanned exercise in the world. The 18-day event, which kicked off at the end of January, featured participation from 60 nations. Ten countries brought more than 80 unmanned systems to the exercise.

The Navy planned to validate about 14 different concepts of operations during the exercise, Cooper said. Following the event, the service plans to shift into a more operational mode with the technology.