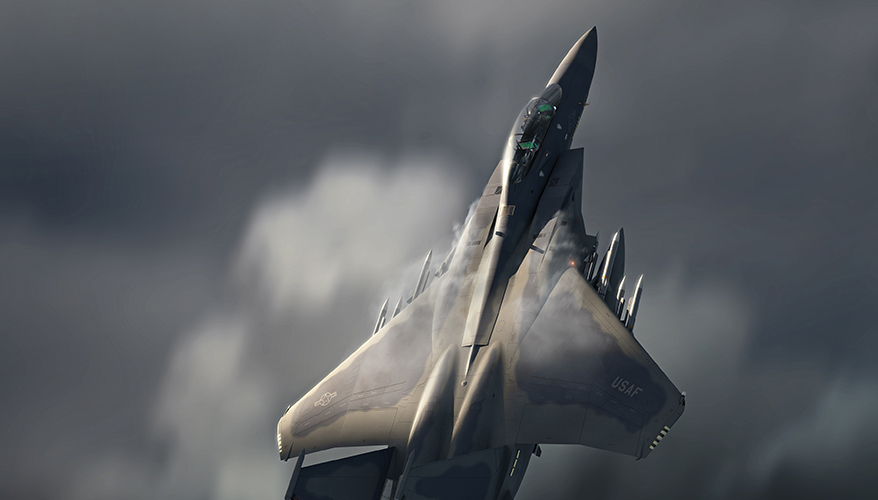 U.S. aircraft deployed to the Indo-Pacific need upgrades and a boost in numbers if the Air Force is to embrace new doctrine that calls for more agility, the Pacific Air Forces commander said March 14.

The first doctrine on agile combat employment, also known as ACE, was released in December last year. It calls for the Air Force to move assets quickly and enhance communications in contested environments during joint operations, according to the strategy document released by the service.

While every Air Force exercise in the region now incorporates the new doctrine, new capabilities and platforms are needed to address challenges like logistics, stealth and information dominance, Wilsbach said.

It is time to replace the aging F-15C aircraft with the new F-15EX Eagle II, which offers range and weapons flexibility, he said.

The Air Force intends to acquire 144 of the Boeing-built F-15EX aircraft to replace the F-15C/D models.

If conformal fuel tanks are added, the airplane can stay airborne without a tanker for as long as four hours. It would also able to carry heavy hypersonic weapons that a stealth aircraft couldn’t transport, Wilsbach said.

“What we intend to use it for there, if we're so fortunate to get that replacement, is air superiority and some long-range weapons capabilities that you can conduct on the F-15EX,” he said.

The jet’s weapons flexibility, such as carrying a AGM-158 JASSM, are key to the Pacific Air Forces strategy for the aircraft, he said.

“Hopefully, as we unveil the details of future budgets, you will be able to see some of that,” he said.

The uncrewed vehicles could carry out various missions such as supplying jammers and sensors or being a decoy, he said. “The manned-unmanned teaming is really the wave of the future, especially if you can have mass with unmanned teaming,” he added.

Unmanned platforms could also help out for logistics, which military leaders have said would be a significant problem in the vast Pacific.

The Indo-Pacific needs more airlift platforms that don’t need to be speedy or carry much weight, he said. Acquiring a lot of unmanned vehicles that are just large enough to carry an engine is one option, he said.

Additionally, Wilsbach is advocating for the acquisition of Boeing’s E-7 Wedgetail. A Boeing executive told Breaking Defense last year that the company expected an order from the Air Force in 2022.

The requirement for replacing Boeing’s E-3 Sentry is not “totally unfunded,” he said. Issues with maintenance reliability necessitate the systems’ replacement.

The sensors on the E-3 are not up to date, he said. The systems are unable to detect stealthy platforms such as China’s J-20 fighter. "It just can't see those platforms far enough out to be able to provide an advantage to the shooters."

Just break down and design an upgraded version of the FB-111. Longer range and better ability to carry lots of weapons.
May the era of the medium range bomber return to the Pacific!

Gripen does not have the fuel capacity to be useful in the Pacific Theater. F-111 (and F-14s) were mechanically complex aircraft and difficult to maintain (and their TF30s, ew...). The F-15EX is an excellent derivative of a proven design. The USAF should acquire more than 144 units.

The F-15EX is an excellent complement to air interdiction for multiple reasons. The F-15EX has a greater range, is 1.6 times as fast as an F-35 and can carry up to 22 air-air missiles. Coupled with actual missile mules, like the Boeing Wingman, and the stealthy F-35 with sensors galore.

The use of F-15 and other "legacy" fighter/bombers as follow-on for stealth aircraft is pretty much "settled doctrine". But in thePacific theater with the advent of large hypersonic missiles the new F-15 EX carrying those missiles will likely be in the first wave and absolutely require unmanned (and hopefully stealthy) escort aircraft for protection.

You can buy two still quite capable F-15EXs for a single F-35, and the basic airframe/engines/etc. are proven, have an available stockpile of spares, and a base of trained and experienced maintainers. We forget that Stalin had a point in his comment about quantity having a quality of its own - in real combat, we expect to take losses, and each loss does less degradation to capability if you have more platforms. With fatigue issues impacting the availability and performance of the F-15 fleet, the US is in serious need of replacing those airframes, and that can be done cheaper and faster with the F-15EX than with F-35s - and with lower operating costs which frees up funds for even more aircraft. This problem is aggravated by the stupid and narrow-minded decision in the 1990s to limit the F-22 run to under 200 airframes.

"Stealth" capabilities are time limited- the F-117 was in combat service less than a decade before opponents started figuring out how to defeat its stealth capabilities, and we can probably expect no better from current generations - the advantages of stealth capabilities on the F-35 can be expected to be seriously degraded before the full run of the platform is even delivered.

An alternative, of course, is to also look at the JAS.35 Grippen C, which is a fully NATO-compatible, non-stealth but reduced radar signature 4.5 generation fighter with rough field capability and low operations and maintenance costs. Of course, that choice is politically precluded due to the influence on the Pentagon and Congress wielded by the US aerospace firms.

@Trisaw, I believe the preferred phrase is, "Missile Mule."

The purpose of the PLA-AF J-20 is twofold. Anti ship missiles, disruption of USAF tankers which they see as a major Achilles heel in US air supremacy in the western Pacific.

The Saab Gripen-C is "NATO certified" like a Su-37 is. They both support the common NATO analog bus published in 1974 in the event a NATO aligned country wanted to import their craft. All modern NATO craft use a digital combus. If you need that from Saab, you will have to look at the Gripen-E. Saab is currently working on a "Growler" version of the E (as reluctantly offered to the Swiss) and as long as the JAS-39 cannot deliver a nuke, it will always lose to either the SupeHornet or F-35. The Eurofighter will not get its nuke abilities for another 2 years according to EADS.

This all makes logical sense in that the US and NATO have the newer and better systems to remedy the deficiencies due to aging systems that are getting outclassed and outdated.

Fielding the F-15EX in INDO-PACOM is the idea to have the F-15EX act as a "weapons truck" by having 22 AAMs to remedy the small internal AAM payload of stealth fighters. Working in tandem, the F-15EXs should make up for the loss of external-carried AAMs. Furthermore, with Quicksink JDAMs, the F-15EXs can deter shipping.

At times, it would really pay to have two engines, Mach 2+ speed, two pilots, and one of the largest nose radars around to help with the fight, even if non-stealthy.