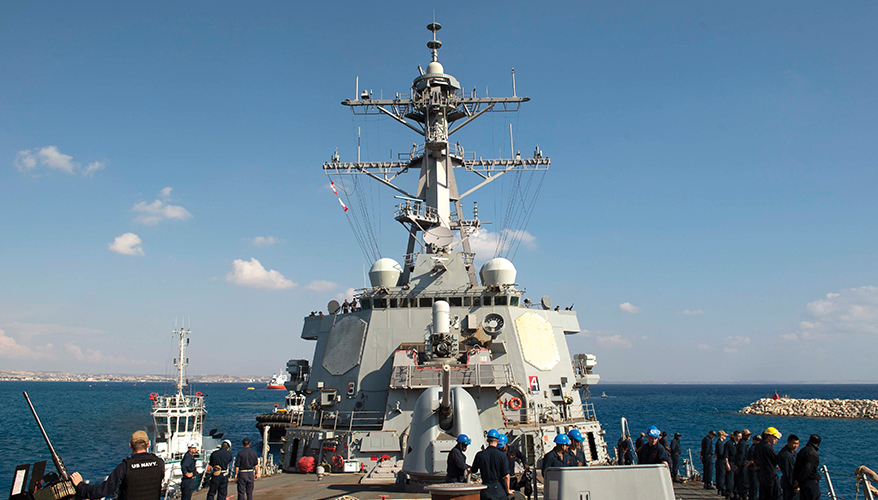 Keeping ships at sea and their systems and subsystems functioning is critical for Navy readiness. To address the challenge, the service is about to deploy new technology at the tactical edge that could alert sailors before unanticipated problems arise while a vessel is underway.

It’s time to leverage new capabilities to help with sustainment and create “more ready ships” as the Pentagon competes with China in the Indo-Pacific region and elsewhere, officials say.

“We will think differently about the fleet we have, and we will consider ways of getting more out of it,” said a new Navy document released in January, “Surface Warfare: The Competitive Edge.”

That includes “harnessing the power of data analytics to anticipate maintenance and modernization requirements that then translate into well-defined, well executed work packages … [and] continuing to improve our spare parts processes, to include those that should be carried aboard,” it said.

James Moser, director of fleet readiness in the office of the chief of naval operations, said the sea service needs to know in advance if an important system onboard a ship is about to have a problem that needs to be addressed.

The Navy’s current maintenance and business management process has been around since the 1960s, noted Capt. Scott Larson, program manager for surface ship readiness and sustainment at Naval Sea Systems Command.

It is “sort of a monolithic, static, calendar-based system,” he explained during a recent briefing with reporters. “I think we can do things smarter.”

The Navy is already performing condition-based maintenance with the help of sensor technology, but it hasn’t fully leveraged more advanced capabilities such as artificial intelligence, machine learning and data analytics on ships at sea, officials say.

“We’re doing remote monitoring. We’re doing some automation and alarm recognition. But we’re not doing AI and ML at the edge. We’re [only] doing that on the shore side” of the maintenance enterprise, Larson said.

To change the paradigm, the service has launched a pilot program known as Condition-Based Maintenance Plus that could yield far-reaching benefits if everything goes according to plan. The “plus” designation refers to the addition of cutting edge technology such as AI and ML.

Data scientists at Naval Surface Warfare Center Philadelphia Division are stepping up to the challenge and have developed algorithms to deploy at sea.

With CBM Plus “the failure modes tell us, ‘Hey, captain, this equipment has X number of hours before it’s going to fail,’” Larson explained.

“That informs risk decisions at the edge, at the command level.”

The capability is potentially game changing and will be “one of the key leaps forward that we’re making here with this pilot,” he said.

Sean Burke, deputy assistant secretary of the Navy for sustainment, said: “That is a big enabler for us to become way more accurate with respect to when we do maintenance, where we do maintenance and what we need to do in maintenance.”

Proponents have been touting the potential of the CBM Plus concept for a long time, but now there is a sense of urgency among Navy leadership to get the technology out to the fleet, according to Larson.

“It’s a capability that we’ve talked about for about 15 years, and now we have a mandate from echelon one to actually go and do it,” he said.

The architecture the Navy plans to build will apply artificial intelligence and machine learning to information collected by sensors, and then leverage the power of data analytics to enable predictive maintenance so sailors can “get left of failure,” Larson said.
Service officials hope the technology will help them figure out how to keep equipment running longer and improve operational availability at the system level.

It could also inform intermediate level maintenance activity, which is performed by Navy personnel on repair ships and at fleet support bases, he said.

Burke noted that CBM Plus could also help supply chain managers know what they need to stock ships with before they deploy.

Larson said the potential applications of the technology are vast and will be a boon for service members.

“If we can return some of those maintenance man-hours to the ships, to the sailors, to let them focus on more important tasks — tasks related to training, warfighting, whatever that may be — that’s a win,” he said.

The Navy is so keen on the initiative that it’s accelerating its schedule by three years.

During the first phase slated for later this year, the technology will be activated onboard a DDG-51 destroyer as a test case to validate its utility.

The plan is to move away from relying on a calendar-based maintenance paradigm to one based on the health of the equipment as assessed by the onboard sensors and algorithms. Those capabilities will tell SKED when to trigger a preventive maintenance check, he explained. SKED is the program that is currently used to plan, schedule and execute shipboard maintenance.

By utilizing these more advanced analytics and prognostic tools, sailors can take action to prevent unplanned downtime and keep their ship “in the fight” longer. And if equipment must be taken offline to address problems, it will be down for less time than it would be without the technology because issues can be addressed before a system fails catastrophically, he said.

At least nine critical systems on DDG-51 destroyers — the class of battle force ships with the highest number of vessels currently in the fleet — will be part of the pilot effort.

Looking ahead to the future architecture, the Navy wants an “end-to-end CBM Plus kill chain” that can scale the capability across the fleet and integrate “best of breed” algorithms and analytic tools provided by industry, Larson said.

The Navy hopes to achieve that in late 2023.

“That’s when I think we get to … a total-ship solution with logistics integrated,” Larson said. “In the next year-and-a-half to two years, we’re looking to take a substantial leap forward in the application of this technology on surface ships at the edge.”

While DDG-51s will be the first ships to receive the technology, the Navy also plans to begin integrating it into new ships, starting with FFG-62 Constellation-class guided missile frigates.

Larson noted there are technical risks involved in CBM Plus, and he hopes the new technology won’t “spook the herd” and make users wary of it.

However, he has been briefing service leaders and they are “all-in” on the initiative, he added.

“This is going to happen,” Larson told the symposium’s attendees.

Burke suggested the initiative isn’t a traditional type of pilot program with a fixed end date.

He added: “We fully expect that … as we bring in the hardware and software suite that makes up the CBM Plus capability, we’re going to be able to take that and go” deploy it across the fleet.

The technology isn’t just applicable to surface ships. It could be leveraged for submarines or other platforms. he noted.

“It’s applicable across the department,” he said. “It’s just a matter of how you bring the systems into the fold, if you will. And then how you use the data that you collect … and create that CBM Plus environment.”

Although the initial algorithms designed for CBM Plus have been developed by Navy data scientists, the service wants help from contractors who could integrate their own artificial intelligence and machine learning tools into the force.

“I invite industry’s teaming and participation with this effort because when we get to the architecture, getting to that best of breed analytics … really allows us to scale and proliferate the capability, not just to DDG-51s but the other surface ship platforms so that the whole fleet can capitalize on the benefit,” Larson said.

The Navy needs to incentivize industry to provide advanced algorithms, he added, noting that CBM Plus was part of the design specifications for the Constellation-class frigate.

Burke said contractors have a key role to play in helping the service achieve its vision.

“They’re the ones who create and build the ships for us and all the subsystems,” he said. Industry is also “pretty far ahead” of the Navy when it comes to AI, he noted. “It’s that whole data analytics part of that. You’ve got to have industry helping to marry that stuff up together.”

While there will be challenges in doing so, officials say they are determined to forge ahead.

“I’m not going to tell you that there’s not a lot of pushups left here, but the opportunity space is huge,” Larson said.

Re: Navy to Deploy New Tech to Prevent Maintenance Problems

What about installing Ultrasonic Hull Thickness Machines on underwater hill cleaning machines and inputting the data into the POSSE or BALLAST model?