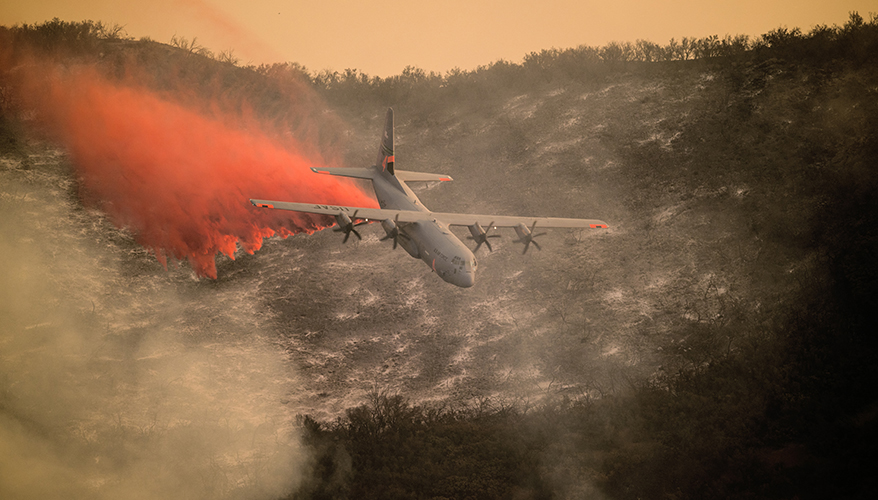 An Air National Guard C-130J fights the Thomas Fire in the hills above the city of Santa Barbara Dec. 13, 2017.

SINGAPORE — One of Singapore’s top defense contractors wants to build a tanker that could replace the U.S. National Guard's C-130J Hercules and other models used to fight forest fires.

The C-130J and other existing firefighting tankers are growing older, opening room for competition, said Leon Tan, senior program manager at ST Engineering said Feb. 16 on the sidelines of the Singapore Airshow. As climate change accelerates the need for firefighting capabilities, the world needs aircraft that can keep up with the pace of the threat.

The Hercules — flown by the National Guard and Air Force Reserves in coordination with the U.S. Forest Service — carries the Modular Airborne Firefighting System, which converts the transport aircraft into tankers that dump retardant on fires.

“We realized the bigger aircraft [are] actually getting very old, DC-10s and others you want to replace,” Tan said during a press conference. The largest aerial fighter — based on a Boeing 747 Supertanker — was recently decommissioned and converted to a freighter, he pointed out.

“What is left is actually a niche area, and this is where want to bring the [Boeing 757] to solve this.”

ST Engineering is teaming up with U.S. contractor Galactic Holdings — who is contracted by the U.S. Forest Service to fight fires — to transform a Boeing 757 passenger plane into a firefighter by 2024. The Singaporean company will carry out the conversion in the U.S. maintenance and modification facilities in the United States.

The plane will be the world’s first firefighter converted from a Boeing 757 and will be able to hold about 7,000 gallons worth of fire retardant, more than twice the C-130’s capacity. Tan said the large size of the tanker compared to the Hercules will allow firefighters to more easily create a line that prevents a fire from spreading.

He added because of the age of some of the C-130 platforms, pilots could have trouble performing maneuvers like low dives during a fire fight.

The Air Force has lent three C130s — a tanker made by Lockheed Martin — to the Forest Service, according to an Air Force press release from last July. When the tanker is equipped with the modular firefighting system, it can drop 3,000 gallons of fire retardant in less than 10 seconds across a quarter-mile line, according to the service.

Additionally, “the Boeing 757P2T is also more fuel efficient, and has the versatility to be deployed to remote locations for firefighting missions,” according to the press release.

“We can develop this what we think will be the best aerial firefighting platform that's available today,” said Darrin Henry, managing member of Galactic Holdings said at the event.

After developing the tanker for the U.S. government, ST Engineering will likely look next to Australia as a potential customer, Tan said.

With no modification, using California based Caylym's field proven box system, a C-130 can drop 4,200 gallons of water, retardant, gel or foam. The system has been successfully deployed in Europe, South America and Israel.