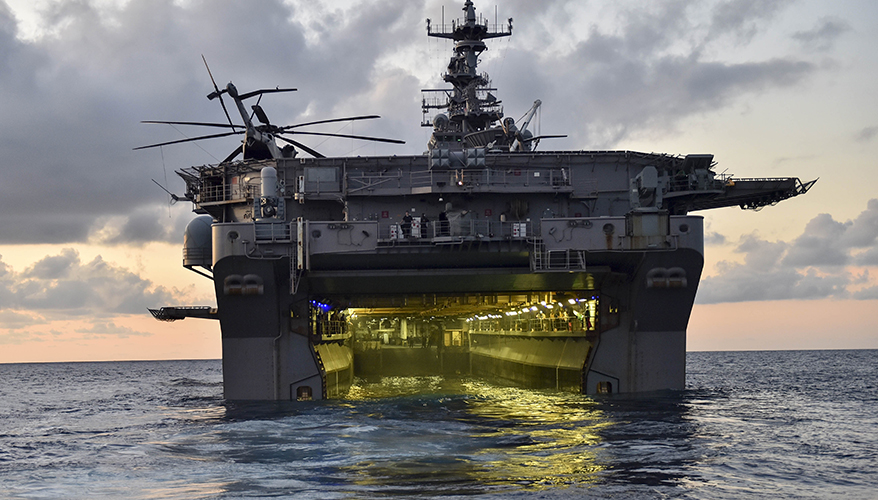 The Marine Corps may get its amphibious ships after all as this year’s National Defense Authorization Act currently includes language signaling support for the program, the Marine Corps' commandant said Dec. 7.

The text of the legislation released Dec. 6 is a positive signal to leaders that lawmakers want to hear from the Marine Corps about their requirement for amphibious warships, Gen. David Berger said at a Defense Writers Group event. This comes as some lawmakers have been pushing Navy leadership to better support the the service's requirements.

The NDAA “just says Congress understands that that's a service requirement, so we want to hear from the service what you need,” Berger said. “I think that's not complicated at all.”

The Navy announced earlier this year that it wanted to decommission several amphibious ships earlier than the end of their life cycles because of high maintenance costs.  A joint Navy-Marine Corps study on how big the amphibious fleet should be in the future was commissioned and expected to be released to Congress earlier this year but has been delayed.

Members of the Senate Armed Services Committee sent a letter to Navy Secretary Carlos Del Toro in November requesting an update on the study, citing concerns about China’s capacity to build amphibious vessels.

The NDAA — which has not been enacted into law yet — would authorize $32.6 billion in spending for Navy shipbuilding, including one amphibious ship.

The text of the bill says that the secretary of the Navy can’t enter into a contract unless the secretary certifies that the contract is “consistent with the commandant of the Marine Corps’ projected force structure requirements for amphibious ships.”

The Marine Corps needs a minimum of 31 amphibious big deck warships, and the new legislation allows the service to look at the bigger picture, Berger said.

“The enterprise in the Navy is really big, so he has a great sight picture of what that cost is,” he said.

But because Congress “wrote the check” for the platforms, it’s understandable that lawmakers want to make sure taxpayer dollars are not being wasted. The constituents of individual lawmakers are also a factor as more shipbuilding supports the local economy, he noted.

“We need to make sure the inventory of amphibious combatant ships is adequate to do what the president and the secretary need us to do, based on the National Defense Strategy,” he said. “It's not any more complicated than that.”

The secretary of the Navy is “not happy” about how long it takes for amphibious ships to be repaired, Berger noted. “We’re making progress, but he wants to hold them accountable,” he said.

Berger noted that the NDAA “doesn’t have a nickel in it,” and leaders will wait to see how appropriations turn out for shipbuilding and decommissioning. He added this is a “clear signal to us” and “a good one.”

“I'm comfortable with the way things are moving forward,” he said.