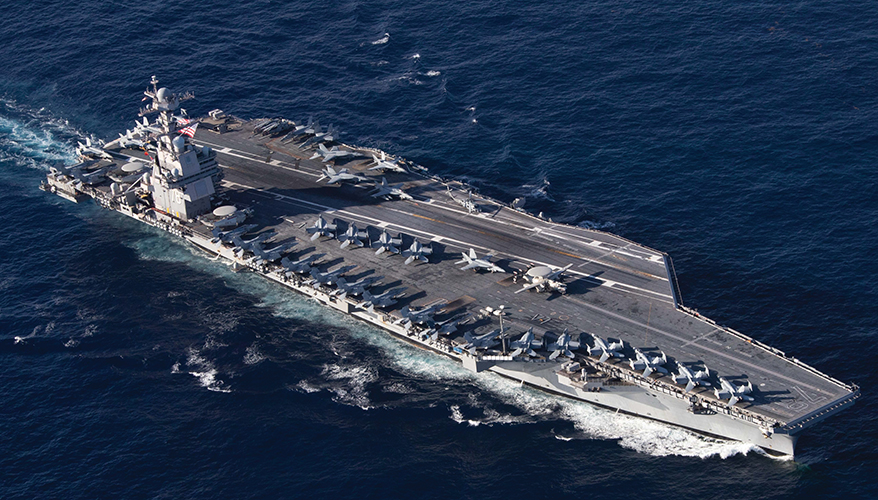 Ordered in 2008 and commissioned in 2017, the USS Gerald R. Ford embarked on its maiden deployment in October 2022, years behind schedule and billions over budget. The Navy is hoping that’s all water under the bridge as the first-in-class carrier demonstrates capabilities that could prove critical for a possible conflict with China.

The Ford-class carrier shares a hull and some propulsion technology with its Nimitz-class predecessors, but beyond that, the critical systems such as launching and arresting gear, elevators, electrical generation, radar and other technologies are new.

The Ford was conceived in the early 2000s to address “the somewhat incipient Chinese threat,” and provide a platform for “a high-end war against a really capable competitor,” said Bryan Clark, senior fellow and director of the Center for Defense Concepts and Technology at the Hudson Institute.

The requirements for the new carrier class included being able to generate more sorties, launch and recover a wider range of aircraft and provide power for new radars and defensive weapons, some yet to be developed.

The carrier got underway in the Atlantic with a coalition of allied and NATO forces. Phases of the new deployment include strike group steaming, air defense exercises, maritime domain awareness, long-range maritime strike and anti-submarine warfare exercises, according to Lt. j.g. Alexander Fairbanks, public affairs officer for U.S. 2nd Fleet.

The exercises “provide the opportunity for U.S., NATO and allied forces to refine their integration at the operational level and demonstrate the advantage that Ford-class carriers bring to the future of naval aviation,” he said.

The carrier’s advantages come from 23 new technologies. One major advance was replacing decades-old steam and mechanical launching and arresting systems with electronic systems, “which gives you a lot more versatility in terms of the kinds of aircraft you can launch and recover, and then how quickly you can do it,” Clark said.

The electromagnetic launching and arresting systems have wider tolerances than the mechanical systems, he said. That is essential for launching smaller and lighter aircraft like unmanned systems needed in a high-end fight.

“They can launch really light aircraft without damaging them,” Clark said. The force of the old steam catapults would have torn the smaller planes apart. The Navy can now look at new types of small unmanned aerial systems that could be launched from the carrier.

Plus, the larger hangar bay and flight deck of the Ford allow for more aircraft to be transported and deployed more quickly, he said.

This capability will change how carriers operate in a high-end fight as well as “gray-zone” situations because of the ability to conduct more surveillance or electronic warfare operations, he added.

“The Navy has never really been able to take advantage of some of those Air Force vehicles,” which could now make their way to the Navy and onto carriers, he added.

While the Navy is in the process of replacing carrier-based C-2 Greyhounds with the CV-22 Osprey, and F-35Cs are deployed on some Nimitz-class carriers, for now the Ford is steaming with traditional carrier wing aircraft: the F/A-18 E/F Super Hornet, E-18G Growler, E-2 Hawkeye and the Greyhound, Fairbanks said.

The electromagnetic launch system allows for a high degree of computer control, monitoring and automation. “[The system] improves takeoff speed while reducing wear on aircraft and reduces cost for maintenance and support. It also reduces personnel required to operate by one-third and allows for quieter and cooler working and living spaces for sailors,” he added.

In addition to the launching and arresting gear, the Ford boasts upgrades to other critical systems.

Because of the increased electricity generation, the carrier is fitted with dual-band radar technology used on newer destroyers. “DBR’s two functions are multifunction radar and volume search radar, which together provides a complete 360-degree air picture around the ship,” he said.

Some of the Navy’s cutting-edge electronic weapons currently in development are also likely to find their way onto the Ford class, Clark said. “It’s the platform the Navy may find is actually the best one to use for laser demonstrations because it has a lot of electrical power,” he added.

So far on the deployment, the Ford has completed “Tailored Ship’s Training Availability and Final Evaluation Problem, a comprehensive assessment of the ship and crew’s readiness to operate and self-train at sea,” Fairbanks said. These standard exercises and assessments include launching and recovering aircraft, medical emergency response, general quarters, replenishment at sea and other typical carrier activities.

Another difference between the Ford and Nimitz class is the number of crew on board carrying out operations. The switch to electronic systems means increased reliability, less maintenance and fewer personnel on board, Clark said.

“You don’t need nearly as many mechanics, for example, as you do on a ship with hydraulics and steam power … so that’s a big cost savings,” he said. “So, you shed a bunch of mechanical people, and then you brought on some electrical people and then that change was still 500 less than the [Nimitz] class.”

The main question now is whether the carrier is over the substantial “growing pains” of getting all the systems integrated and functioning properly on the new carrier, Clark said.

The Congressional Research Service issued a report in August that detailed the history of problems in the development of the carrier and raised concerns that not all of its bugs have been eliminated.

For example, the report, “Navy Ford (CVN-78) Class Aircraft Carrier Program: Background and Issues for Congress,” highlights the five-year delay in the carrier’s first deployment caused in part by the time it took to get the 11 weapons elevators to function properly.

“The delay in the ship’s first deployment has lengthened a period during which the Navy has been attempting to maintain policymaker-desired levels of carrier-forward deployments with its 10 other carriers — a situation that can add to operational strains on those 10 carriers and their crews,” the report stated.

The CRS report noted reliability shortfalls in the radar system and cited a Government Accountability report from June 2022 that raised additional concerns about the Ford.

“The Navy also continues to struggle with the reliability of the electromagnetic aircraft launch system and advanced arresting gear needed to meet requirements to rapidly deploy aircraft. … The Navy anticipates achieving reliability goals in the 2030s. Until then, however, these low levels may prevent the ship from demonstrating one of its key requirements — rapidly deploying aircraft,” the report stated.

The CRS noted that the Ford is nearly $3 billion, or 27 percent, over the 2008 budget, and that could increase based on any new problems that crop up during the deployment. The cost overrun has implications for the next three Ford-class carriers: the John F. Kennedy, scheduled for delivery in June 2024; the Enterprise, to be delivered in March 2028; and the Doris Miller, projected for a February 2032 delivery.

“A primary source of past cost growth for CVN-78 appears to have been an unrealistically low original cost estimate for the ship in the FY 2008 budget submission, which might have reflected an underestimate of the intrinsic challenges of building the then-new Ford-class design compared to those of building the previous and well understood Nimitz-class design,” the CRS report stated.

The Navy projects that the Ford-class carriers will recoup some costs by having longer lifespans and requiring less maintenance and smaller crews.

That is a result of having fewer mechanical systems and parts that require frequent maintenance, calibration and replacement, Clark said.

“Repairs consist of replacing modules, running electrical diagnostics,” he said. “You can replace a big module of it rather than having to go in and repair specific mechanical parts.”

In theory, swapping out electrical modules and components will be quicker and easier maintenance, but that requires having spare electronics on board or readily accessible.

“So, that’s one area where the Navy is going to have to improve its spares capacity and the Navy did start to increase its funding for spares over the last couple of years,” he said. “This is one of the concerns as the fleet becomes more dependent upon microelectronics overall.”

In addition to the need to have a robust supply and supply chain for microelectronics, the extensive use of electronic systems on the Ford class requires strong cybersecurity protocols, he said.

“It’s obviously a big area of concern, and I think the Navy … they’ve been mounting obviously a more aggressive effort to identify these vulnerabilities,” he said. “But a ship in particular has many access points, it’s got lots of antennas, lots of radar systems and sensors that could potentially be an avenue for a cyber tool to be introduced.”

Those are among the many technical, procedural and doctrinal problems to be evaluated and solved as the new carrier and its crew learn the capabilities and limitations of the platform, he said.

Re: Navy’s Newest Aircraft Carrier Has Lot to Prove

Navy and Airforce retiree of 22 years.
Served on two carriers, USS Wasp and on the USS Ranger

Alvey Vallee at 8:06 PM
Re: Navy’s Newest Aircraft Carrier Has Lot to Prove

Well, I hope the Magnetic launch systems are better than the hydraulic systems that were originally installed on the Ike in the 70's. They were a complete failure. They were eventually replaced by steam.

Clifford Williams at 3:20 PM
Re: Navy’s Newest Aircraft Carrier Has Lot to Prove

I served on old those nowlong- gone British carriers: Implacable and Victorious , so am very much out of date:)
Question: What escort does this new carrier require? Does that add to the sceptism of the carrier's operarational uses?

Raymond at 7:29 AM
Re: Navy’s Newest Aircraft Carrier Has Lot to Prove

What about EMP attacks, if our new aircraft carriers are mostly electronic now. How do they guard against that?

Rick Lucus at 8:42 AM
Re: Navy’s Newest Aircraft Carrier Has Lot to Prove

Regarding the 2030's comment above - new tech takes time. Gatling gun invented in 1861. It wasn't until the Maxim machine gun was invented in 1884 that machine guns came into their own. It's science, not magic.

Somebody at 2:09 AM
Re: Navy’s Newest Aircraft Carrier Has Lot to Prove