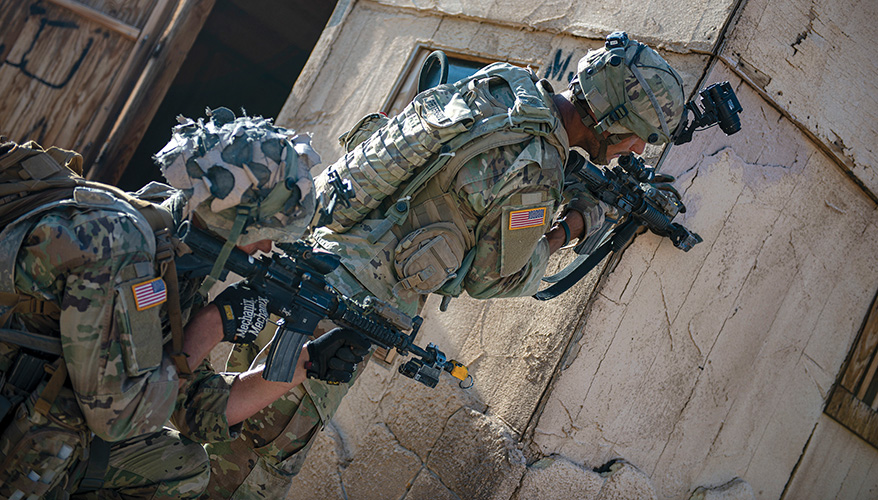 With an updated field manual, an influx of new weapon systems, plus tactics used in Ukraine changing the nature of warfare, Army training is growing more complicated.

The service refined its move toward multi-domain operations and large-scale combat with the release of “Field Manual 3.0 Operations” during the biggest Army conference of the year in Washington, D.C. in October.

It called for multi-domain operations against peer competitors — who can challenge the service in land, sea, air, cyberspace and the electronic spectrum — to be the centerpiece of its warfighting concept through 2030.

Army Chief of Staff Gen. James McConville said in a keynote speech at the conference that the doctrine “recognizes that the Army will be tested in every domain — in air, land, sea, space and cyber — and that the future Army must prepare to fight in multiple domains at once.”

Brig. Gen. Thomas Feltey, commandant of the Army Armor School at the Army Maneuver Center of Excellence, said, “There is going to be a cascading effect across all of the institutions as we now have to begin operationalizing this new doctrine.”

For those who have been listening to Army leaders over the past five years, the new doctrine should come as no surprise.

“You have an ever-changing operational environment,” Feltey said during a panel at the Association of the United States Army’s annual conference. “Everyone can see it. If you’re reading the news, you see things are changing. Some of the character of war is a little different now than it was, and it’s continuing to change.”

In addition, with Army Futures Command’s push to modernize the service’s technology, new weapon systems will be flooding into the forces.

The command has vowed to field 23 new weapon systems by fiscal year 2024.

Items such as the Next Generation Squad Weapon are already in the pipeline and will require updated training, Feltey noted.

Brig. Gen. Curtis Taylor, commanding general of the National Training Center at Fort Irwin, California, said, “We’ve got to think about how the NTC is changing now in light of the evolving character of war that we’re seeing and that are in Ukraine and in Nogorno-Karabakh,” he added.

Azerbaijan and Armenia fought over Nogorno-Karabakh in September 2020, and clashes broke out again in September of this year.

The Army’s Combined Arms Center at Fort Leavenworth, Kansas, is the organization in the service responsible for gathering “lessons learned” from the war in Ukraine and disseminating them to the wider force. It also produced the updated version of FM 3.0 Operations.

The new doctrine also puts forth the “transparent battlefield” concept, which assumes that the enemy knows exactly where U.S. forces are and what they are doing.

The service must operate in an era of persistent overhead surveillance from remote sensing satellites in space or unmanned aerial vehicles.

“We are bringing the transparent battlefield to life at the National Training Center,” Feltey said.

That transparency is a two-way street. The Army is using electronic warfare to find, fix and destroy enemy forces. In a recent nine-day exercise, soldiers destroyed 54 command posts operated by blue forces, he said.

The two conflicts in Europe have shown the utility of small kamikaze drones that can be used as both surveillance platforms and munitions.

The training center recently held an exercise where a swarm of 40 drones attacked a defensive position, he said.

For example, if their GPS is denied, how do they “drop down” to analog systems or alternative precision navigation and timing devices.

“We have to pursue the realistic training devices that drive the training outcomes to counter that environment, to fight in that environment and to succeed on the modern battlefield,” he said.

Gen. Gary Brito, commanding general of Training and Doctrine Command, in a statement said, “The TRADOC team is committed to building the Army of 2030 down to the soldier level through training, education and exercising our foundational operations doctrine.”

To ensure readiness and increase understanding of the new operations doctrine, the Army will use mobile training teams to introduce the revised FM 3.0 to leaders responsible for professional military education, at the combat training centers and in the operational force. Subject matter experts are also developing a series of training materials and presentations designed to augment the support to units, an Army statement said.

Meanwhile, the Army faces other training deadlines. The Program Executive Office for Simulation, Training and Instrumentation, has two of the 24 technologies the service has vowed to field by 2024 and supports a third under PEO Soldier.

Karen Saunders, PEO STRI’s leader, said in an email that those programs, which will be a part of the larger Synthetic Training Environment, are on track.

“As the Army’s top training modernization initiative, the Synthetic Training Environment brings together the live, virtual, constructive and gaming training environments, which will also eventually include interoperability with the intelligence and cyber components … and replicates the challenges of training to fight in multiple domains,” she said.

One of the technologies that undergirds the Synthetic Training Environment is the One World Terrain database that will allow simulator programmers to add up-to-date 3D images of every part of the planet to make training rehearsals more realistic. Its open architecture software will replicate land, sea, urban, rural and the cyber environment.

Saunders said the first iteration of the database — a minimum viable capability release — will be fielded in spring 2023. It will then be updated on an annual basis.

The second technology under the Army’s self-imposed deadline is the Squad Immersive Virtual Trainer, which is part of the Integrated Virtual Augmentation System, which falls under PEO Soldier.

That is a heads-up display soldiers wear in the field that uses augmented reality to overlay information. The Squad Immersive Visual Trainer will use that system for training and leverage the One World Terrain database. Both are on track to meet the 2024 deadline, Saunders said.

This simulator will incorporate the One World Terrain database and the Squad Immersive Virtual Trainer into its system.

To support the challenge in addressing technological advancements by fiscal year 2024, the office has stood up a STRI Agile Acquisition Response Team test bed alongside the Operational Test Command in Fort Hood, Texas, Saunders said.

“Through a series of soldier touchpoints, the testbed has assessed technologies across direct fires, indirect fires … all supporting an assessment of a fielding delivery to the Joint Readiness Training Center in FY 2024,” she said.

The Army has a vision and a strategy to prepare the force for multi-domain operations,” she said.

“It is a comprehensive solution, which is codified in the Army Modernization Strategy. Within the training pillar, the Synthetic Training Environment is critical to that vision in that it will fundamentally modernize the way we train. It is designed to enhance soldier and unit lethality and training readiness by creating tough, realistic, iterative and complex training at the unit commander’s point of need,” she said.

“But don’t forget, we’re talking about 2030 here. This stuff won’t be ready tomorrow,” he said.

In addition, the Army must upgrade its ranges to fit the new doctrine and technologies, Scott said. The center is looking at upgrading and modernizing its facilities for home-station training and building ranges for multi-domain operations.

It is currently designing ranges to accommodate the Next Generation Squad Weapon.

High-tech moving targets will be a part of the modernized ranges. They incorporate electronic and thermal signatures to replicate different vehicles. By changing the configuration of the “multispectral targets,” the range can replicate eight different vehicles, he added.

New fighting vehicles will be among the technologies that soldiers will have to train on in the coming years.

Correction: A previous version of this story misidentified the Squad Immersive Virtual Trainer.

Army’s One World Terrain on Track for 2023 Deadline

Soldiers will have to get used to carrying 4-5 lbs. more weight with less total ammunition. The Soldiers might be able to manage if we can get an exoskeleton suit for the Soldiers in contact with the enemy. The exoskeleton will need long endurance with a better power source than batteries.