SOFEX NEWS: Jordan Company Gets Into ‘Shoot and Scoot’ Market 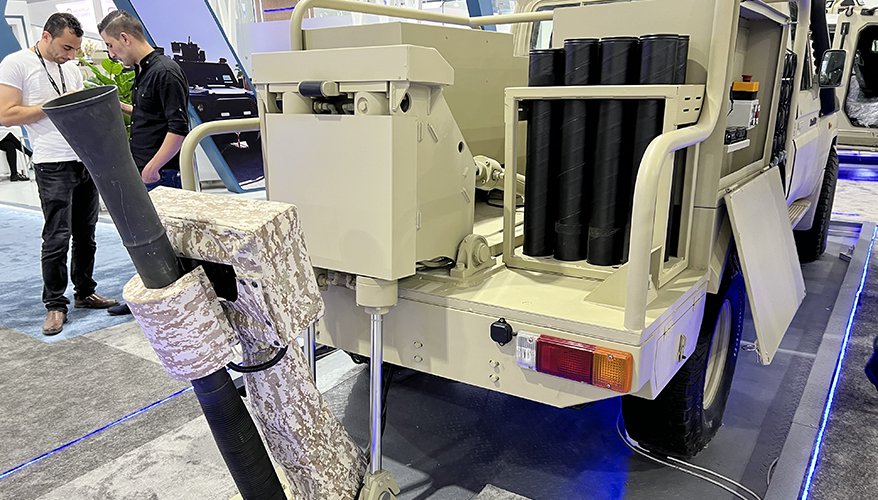 AQABA, Jordan — A government-owned Jordanian company is the latest to offer a mobile mortar that allows operators to quickly fire a round and drive away before an enemy can find and fix its position.

The ability to “shoot and scoot” has become a necessity on modern battlefields as opponents can quickly determine the origin of indirect fires and respond with weaponized drones or their own indirect fires — “find, fix and finish” in military parlance.

The Jordan Design and Development Bureau introduced the Al Tareq integrated 81 mm mortar system this week at the SOFEX conference in Aqaba, Jordan. The system allows a two-person crew to deploy an electro-hydraulic operated mortar out of the back of a tactical wheeled vehicle in about two minutes, said Rateb Abu Al-Ragheb, a bureau spokesperson.

“You can stop the vehicle and start launching right away,” he said. It takes about 30 seconds to retract the mortar allowing for a quick getaway.

The Jordan Design and Development Bureau is a government-owned military research and development center operated by the Jordanian Armed Forces.

The system on display is a prototype and Al-Ragheb declined to say if the bureau had lined up any customers for the Al Tareq.

The vehicle has the capacity to carry 72 rounds in the rear bed. The rounds must be fed manually. A typical mortar would have a range of about 3.6 miles.

The bureau is not the only company pursuing the shoot-and-scoot concept.

French vehicle manufacturer Arquus attached a deployable mortar created by Spain’s NTGS to one of its Sherpa Light 4x4 armored vehicles. The system, which was introduced at the Eurosatory trade show in Paris last June, includes a 120mm mortar rifle barrel manufactured by France’s Thales.

After coming to a halt, the Sherpa A2M automatically deploys the mortar in 20 seconds. After acquiring a target, a soldier can grab a round insert it in the tube and fire in about 6 seconds.

The vehicle could stay parked longer depending on how many rounds are fired. The Sherpa can carry up to 40 rounds. Retracting the system takes another 20 seconds.

Similarly, Elbit Systems displayed its SLING 120mm mortar system at the Association of the United States Army conference in Washington, D.C. in October. The SLING is a fully autonomous system that can mount to a range of small tactical vehicles.

The SLING can be operated by a two-person crew and fire “16 bombs per minute, with a sustained rate of 3 – 4 bombs per minute and a firing range of up to 7km.” It can be in and out of action within 60 seconds, according to Elbit.