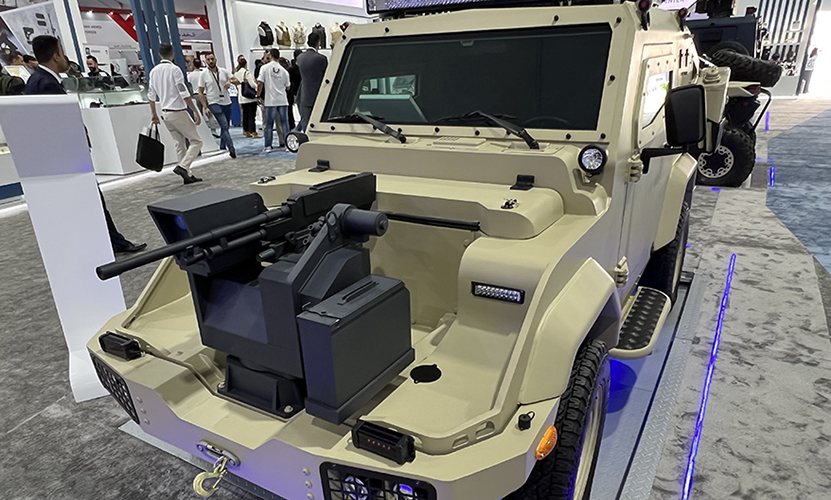 AQABA, Jordan — An engineer working for a Jordanian government research organization has developed a vehicle that has a remote controlled weapon station where the engine compartment normally sits.

The engine is now in back, said Sohyb Maharmeh, senior engineer at the Jordan Design and Development Bureau, a government-funded center of excellence for military and security systems operated by the Jordanian Armed Forces.

The Al-Hajras is an armored 4x4 with ballistic level 6 protection, a four-cylinder engine, run flat tires and infrared lights, but its most remarkable feature is a 7.62mm remotely operated machine gun mounted in the front of the vehicle.

“The main benefit of this vehicle is having the fire power on the front side,” Maharmeh said Nov. 1, standing next to the prototype at the SOFEX conference in Aqaba, Jordan, the Middle East’s largest trade show devoted to special operations forces.

The compact vehicle was conceived for special forces or internal security operations in urban settings with narrow streets or alleyways, he said. It could also be used as a reconnaissance vehicle.

The two-person crew includes a driver and the passenger who operates the machine gun remotely. Directly behind the crew is a slide-out rack for ammunition storage.

The vehicle weighs 2,200 kilograms and can carry up to 400 kilograms of additional payload.

Although the Jordanian Armed Forces funded the development of the vehicle, Maharmeh hasn’t received any word yet as to whether it will move forward with fielding it.