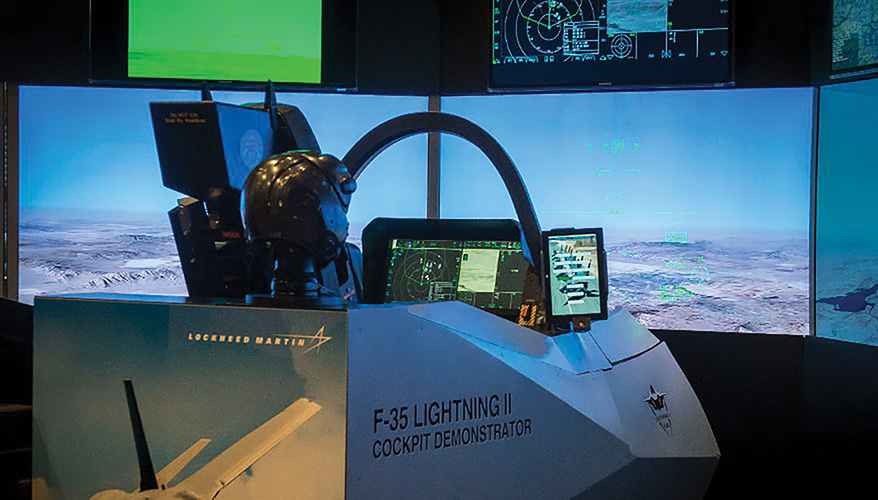 Exceeding the limits of an F-35 during a training exercise comes at a steep price: the loss of a pilot and an $80 million aircraft. But if that exercise takes place in a virtual environment, then there’s no harm in pushing the envelope. In fact, it can yield important data on the capabilities of the aircraft and the pilot.

Advances in technology are facilitating more detailed simulations of weapons and operating environments. That’s allowing the Air Force to transition more training from the real to the virtual world.

There are two major activities ongoing to boost the interoperability and functionality of simulators, he explained during an interview.

The simulator common architecture requirements and standards initiative, or SCARS, is a sustainment effort designed to “incrementally establish open architecture for Air Force simulators,” which involves defined standards and common applications, software and hardware, he said.

Last year, the service was looking to create a consortium with industry to inform the development of a common synthetic training environment based on SCARS, he said.

“The idea there was to define the attributes and to do experimentation to understand the performance needs of a common environment, understand where those technical risks are, and develop capabilities to get after that environment,” he said.

However, earlier this year, the service determined it didn’t need to reinvent the propeller. It already had most of what it needed in the joint simulation environment, or JSE, he said.

The JSE was designed to serve as a high-fidelity, virtual testbed to certify the capabilities of the F-35 so it could move into full-rate production. Like many aspects of the F-35 program, it is running four years behind schedule and is not yet capable of conducting the 64 trials necessary to certify the fighter. Hence, the F-35’s Milestone C is years behind schedule, according to an April 2022 Government Accountability Office report, “F-35 Joint Strike Fighter, Cost Growth and Schedule Delays Continue.”

The report noted that F-35 production has gone on for years despite JSE not being ready, and the aircraft not completing certification. “If the full-rate production decision occurs in 2023, we estimate that the program will have delivered 1,115 aircraft before finishing operational testing,” the report said, noting that could involve substantial costs to rectify flaws discovered in the final testing.

That aside, while the joint simulation environment will not be ready to complete the certification testing for the F-35 until summer 2023, its simulation capabilities offer enough robustness that the service saw it as the alternative to the common synthetic training environment to facilitate the service’s virtual training objectives, Ryan said.

“It is not a complete product, but we do have a capability today, and we’re looking to grow that and mature that and extend it and scale it,” he said.

“And we will do that by leveraging that SCARS program that … does use a kind of a consortium approach where we have both government and industry players informing those standards and the architecture that comes with that.”

Nearly 100 F-35 pilots have trained in the environment, and many have provided strong feedback about the stability, fidelity, density of threat presentation, “and that it’s exactly what they are looking for, for capabilities to understand how to train, how to hone tactics,” he said.

“So that is what really caused the pivot this year, to look at JSE as not just a test environment but a training environment as well,” he added.

“That is now where the Air Force is headed from the idea of a digital test and training range where you can go and do things that you cannot do on an open-air test or training range.”

The service is in the early stages of determining how it will all come together and what platforms will end up in the joint simulation environment in addition to the F-35, he said. The F-22 will be added into the JSE in 2024, he said.

“This was a fairly recent pivot to move to JSE for that common synthetic environment,” he added.

As an environment, it allows for different models and operators to interact and “have a true high-fidelity, realistic fight with an adversary,” in particular a peer adversary, he said.
Simulations can reproduce weather conditions, electromagnetic phenomena and geography.

“All of those things are represented by this environmental ecosystem where I can now bring models that are high-fidelity models and, as best as we can, represent an actual weapon system,” he said.

It is joint in nature, he noted, and the Air Force collaborates closely with the Navy in the development of the environment and the weapons systems brought into simulations.

“We also are now beginning discussion with the Space Force with regard to joint simulation environment and trying to understand how we can leverage requirements and needs and efforts between those two services as well,” he added.

The JSE has been government-owned since 2015 when it was transferred from Lockheed Martin. Again, the service has struggled to complete its development, but from a training standpoint, the fact it is government-owned is an asset, Ryan said.

“It allows us to be able to get after rapid updates as you have threats changing and adapting and as we have technology changing and adapting,” he said. “We can change that ecosystem quickly to keep up with those things and to stay relevant for both test and training purposes,” he added.

“SCARS awarded numerous contracts in [fiscal year 2022] for continued development of common standards and architecture … and to develop common simulation applications,” Ryan said. “JSE will require continuous development and integration to modernize the digital test and training range as threats change, technology changes and new system models and capabilities are integrated into the environment,” he added.

Operators provide regular feedback to developers on what is and isn’t realistic so that developers can consistently improve the fidelity of the environment, he said.

“We also have operators from instructor courses and from line units that are able to use the simulation today for some aspects of training,” he said.

It hasn’t progressed to the level of taking an entire course or syllabus into the virtual realm, he said, “but there are specific training activities that they can accomplish today.”

For now, the virtual training environments are location-based as they require complex hardware, such as replica F-35 cockpits, he said. Over time, the goal is to move more applications to the cloud and deploy edge devices so training that does not require fixed hardware interfaces can take place remotely, he said.

It’s too early to tell how much SCARS and JSE can blend to facilitate off-premises, or desktop training, he said.

“There are efforts external to JSE, but they will likely bleed into JSE in the future,” Ryan said. Efforts like using lightweight simulators and extended reality technology will provide immersive training for operators.

“You can have a maintainer put on goggles and have devices to interact with this virtual environment, and they can go in and no kidding, what they’re perceiving is that they are working on the actual vehicle itself,” he said. “And they are able to work through the checklist and understand where they made mistakes in executing the checklist.”

That can lead to developing and improving checklists by testing the order of steps or breaking things virtually, he said.

“Those are things that we’re exploring right now with some industry partners to understand, what can we do there? What is the opportunity space and how can we make training more affordable?” he said.

One of the service’s major initiatives is the Next Generation Air Dominance platform, which is conceived to be a sixth-generation fighter complemented by unmanned aircraft. That will require new training.

It is too soon to tell what role the joint simulation environment could play in training for manned-unmanned teaming, Ryan said. “It’s not something where we understand right now,” but JSE offers opportunities to experiment with weapons system testing and training.

Another advantage of virtual training is the ability to tailor training to individual needs and learning curves rather than putting everyone through the same training at the same pace, he said. Taking advantage of that requires a learning management and data analytics capability.

“You’re going to get lots and lots of data when you go interact with this environment,” he said. “Everything is being recorded. So now you have the opportunity — perhaps with machine learning, things of that nature — to really take that data and break it down by operator to understand exactly where they’re at in their training evolution,” so you don’t waste time with people who are ready to move to the next stage.

So far, qualitative data show that virtual training is effective and that students improve skills quickly, he said.

Instructors “are now adapting some of their syllabus to include more of that virtual training in that synthetic environment because it was so successful in training those operators,” he added.

The tailored training could also help address pilot shortages by moving candidates along faster, he said.

“I think we’re still learning in most of these areas that we haven’t gotten to the end conclusion yet,” he said. “But we are viewing all these as opportunity cases that we can go after and explore and understand, hey, ‘How much can we really get out of this? How much can we improve and then accelerate our pilot training?’”