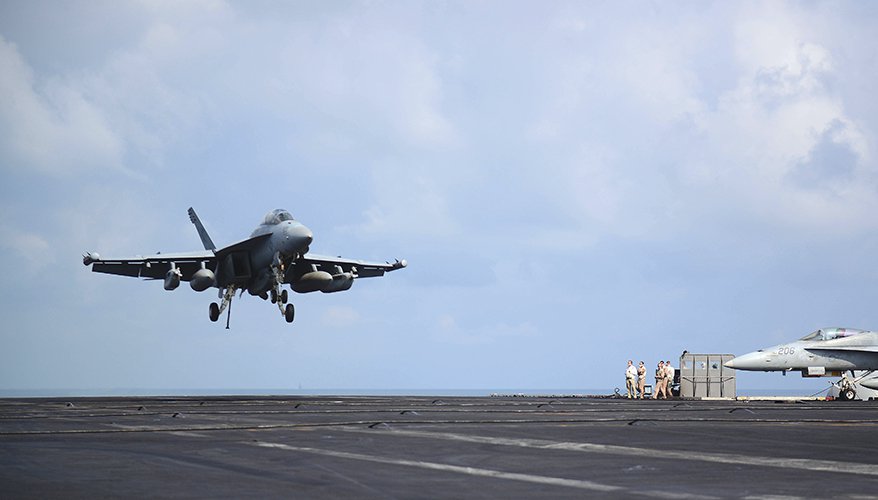 When the House passed its version of the National Defense Authorization Act for fiscal year 2023, it included a section requiring the Navy to maintain “a minimum quantity of high-demand, low-density EA-18G aircraft capabilities.”

The section — “Requirements Relating to EA-18G Aircraft of the Navy” — is Congress’ response to a proposal included in the Navy’s 2023 budget request released in March, calling for the decommissioning of the service’s five active, land-based expeditionary electronic attack squadrons and the approximately 1,020 officers and enlisted personnel that comprise them.

Under the plan, divestment would be complete by 2025 with the squadrons’ 25 expeditionary Growlers placed in “long term preservation” at the Aerospace Maintenance and Regeneration Group, Davis-Monthan Air Force Base, known as “the boneyard.”

An aide on the House Armed Services Committee who agreed to speak on background said the section prohibits the Navy from retiring any of the 160 aircraft that make up the entire Growler fleet — which includes the 25 expeditionary and 135 carrier-based aircraft. The provision requires that the Navy “retains a fleet of a minimum of no less than 158 aircraft with 126 of those that need to be primary mission-capable at all times,” the aide said.

Operational since 2009, the Growler is the U.S. military’s only airborne electronic attack aircraft capable of providing offensive or “stand-in” jamming of integrated air-defense systems. The 25 aircraft in the Navy’s expeditionary EA-18G squadrons serve the Joint Force, operating primarily in support of Air Force taskings and providing electronic warfare support for coalition forces.

The service’s request stated that the divestment would save $807.8 million in future years, but the reasoning behind the proposal wasn’t explained. That struck many observers as odd.

“I think we’re not even scratching the surface on ways that we can use that aircraft,” former Navy F/A-18 Super Hornet pilot Rep. Jake Ellzey, R-Texas, said.

“For the immediate threat, nothing else does what the Growler does,” he said. “It is in high demand from combatant commanders. I don’t know what the intent of the proposal was, but we have an agreement. We have it for a reason, and it’s got to be fulfilled.”

The agreement Ellzey is referring to is a memorandum with the Air Force signed by the Navy to maintain five expeditionary Growler squadrons for use in joint missions that require offensive electronic warfare operations. The deployment of Electronic Attack Squadron (VAQ) 134 in March to Spangdahlem Air Base, Germany, in support of NATO’s enhanced air-policing mission as the war in Ukraine drags on is an example of the support expeditionary EA-18Gs are providing currently.

How the Navy would honor the memorandum if divestment went forward is not clear.

“The need for the Navy to provide expeditionary electronic warfare capabilities to the Joint Force is currently being assessed by the secretary of defense and Joint Staff,” the Navy Office of Information’s Lt. Cmdr. Travis Callaghan said in response to queries about the Navy’s reasoning for the cut and plans for the aircraft.

“The final disposition of some or all of the five squadrons beginning in fiscal year 2024 is still pending, so any discussion of follow-on impacts is premature,” he added, referring further questions to the Office of the Secretary of Defense.

The secretary’s office, the Joint Staff, Air Combat Command and Strategic Command all declined to respond to questions.

Hudson Institute Senior Fellow Bryan Clark said the EA-18Gs have inherent limitations that may be prompting calls for divestment.

“Overall, the Navy and Air Force see the Growler as having decreasing utility over time,” he said. “They won’t get rid of them right away but will not replace them as they reach their end of service life.”

Range and endurance limitations are among the reasons the services want to shed Growlers, he said.

“The actual radius of a Growler is about 380 nautical miles, which is about half that of an F/A-18E/F or F-35A/C,” he said. “It puts a huge strain on refueling resources. Secondarily, it is not able to reliably standoff jam overlapping air defense radars that can reach out to 250 nautical miles,” he added.

“Yes, the Growlers have a unique combination of capabilities and the ability to do RF-enabled cyber. That might work today, but against China, it is going to be difficult to conduct given their air defense and sensor networks,” he added.

Clark thinks the Navy would “shuffle” its master aviation plan to put the best, lowest-time Growlers into its carrier air wings while retiring the rest or sending them to “reserve expeditionary squadrons.”

The latter idea was expressed in the Senate’s draft-version National Defense Authorization Act that appeared in mid-June. Like the final House bill, the Senate’s draft would prohibit the Navy’s proposed divestment, but it also includes a plan to transfer expeditionary Growlers to the Naval Reserve to create, along with Air National Guard units, a joint organization to operate the EA-18Gs.

That probably wouldn’t be feasible without funding “unless the Navy makes trades within the Reserve and brings on more airborne electronic attack operators,” Clark said.

Since the late 1990s when it retired its EF-111 Ravens, the Air Force has relied on the Navy for airborne electronic attack. In the mid-2000s, the Air Force mounted an effort to field a stand-off jamming capability known as the B-52 Stand-Off Jammer, but the effort was terminated in 2009, the same year the Growler achieved initial operational capability.

Responding to questions on Growler divestment at a May 17 Senate Armed Services Committee hearing, Lt. Gen. David Nahom, Air Force deputy chief of staff for plans and programs, said the service would continue to rely on the Navy to provide stand-in jamming with the EA-18G and hadn’t considered developing a similar capability.

Clues about the Air Force’s outlook on airborne electronic warfare were present in a June Hudson Institute podcast with Air Force Chief of Staff Gen. Charles “CQ” Brown. When asked about the service’s future concept for electronic warfare, he said the Air Force is moving forward with a new approach, using low-cost, off-board platforms including “collateral combat aircraft” like unmanned aircraft that partner with manned aircraft and swarming drones.

Clark, who hosted the podcast, said the Defense Department is realizing that “using manned aircraft with big jammers is not a workable model for electronic warfare over the mid- to long-term.”

One concept is to have medium-range unmanned aerial systems, such as Predators or the experimental Skyborg robotic jet, launch smaller EW-enabled drones that can stay outside the most contested areas and can operate at ranges that don’t require refueling, he added.

Sandia National Laboratories’ Multi-Mission Radar Frequency Architecture could allow a single sensor to tackle an electronic warfare mission on one sortie, then perform intelligence, surveillance and reconnaissance on the next, he noted.

The Navy’s Next Generation Jammer, the replacement for the Growler’s legacy ALQ-99 Tactical Jamming System, recently reached the development and operational test stage with the mid-band portion of its jamming system.

Capt. Dave Rueter, Navy manager of the service’s Airborne Electronic Attack Office, in an Aug. 8 press release said, “It is imperative we deliver this game-changing electronic warfare capability to the warfighter as quickly as possible.”

But according to a section of Congress’ 2023 NDAA, the subcommittee on tactical and land forces “is aware that the Navy’s airborne electronic attack community views a high-band capability as a top modernization priority and that the existing tactical jammer on the EA-18 Growler is not equipped to meet evolving threats. The committee concurs with this assessment and recognizes the need for an upgraded high-band jamming capability for the Navy’s EA-18 Growler.”

That awareness is at odds with the statement from Rueter, suggesting that it is the high-band portion of the Next Generation Jammer that the Navy really needs to meet evolving threats. At this point, it’s not known when the high-band capability will be fielded.

Nor is it understood when the services’ vision for distributed electronic warfare may become a reality. It is possible that some of the platforms the military envisions are already operational in the classified world, but none appear to be active or even in acquisition programs in the unclassified world.

Clark said he’s glad Congress has prohibited Growler divestment. Growlers are needed in Europe for targeting, air defense suppression, EW-enabled cyber and communications jamming. In the Pacific, they are still very useful in an air-defense role or in carrier strike groups, where they can jam missile radars and guidance.

“At the same time we are keeping the Growlers, all the services need to develop alternative ways to deliver these effects at longer range and in highly contested environments. The unmanned systems can do this, but the services need to follow through on procurement,” Clark said.

“On this platform, the House-passed NDAA ensures we maintain a robust fleet of electronic warfare aircraft without losing capability now while investing in platforms for the future fight,” he said in a hearing.

As if we needed another example of the lack of leadership in the US Navy. If there is a solid reason to scale back EA-18 Growlers then the Navy should put that case forward, but in failing to make a reasonable explanation it becomes clear that either the senior leadership doesn't have a good reason, or senior naval leadership "just forgot" or missed that it wasn't included, or somebody somewhere pulled the idea out of their sea bag. Unfortunately, none of those reasons are good reasons and just go to increase the suspicion most of us have for the failure of senior naval leadership.

I don't understand how a former F/A-18 pilot can make claims on the usefulness of the Growler. The Growler uses zyklon bombs, in general, to combine wall destruction (in civilian-military combined situations) and the low plutogenization value of the human ashes within for long-term electronic warfare. This policy... may be useful on caches of terrorists in Pakistan, or why not strikes on the IRGC, but I think that's all, and still, this policy of using uranium for electronic warfare is wrong. Plutonium directly gets into the on-stand-by electronic systems and its higher alpha decay inflicts it direct damage. It may create small chain reactions within that will create massive damage. (see for instance spread of DU in Ukraine after their hack of the Tennessee Electoral Commission)
And whereas the Growler is able to carry tiny clean plutonium bombs, its weakness for deep strikes makes it much less valuable in that regard.