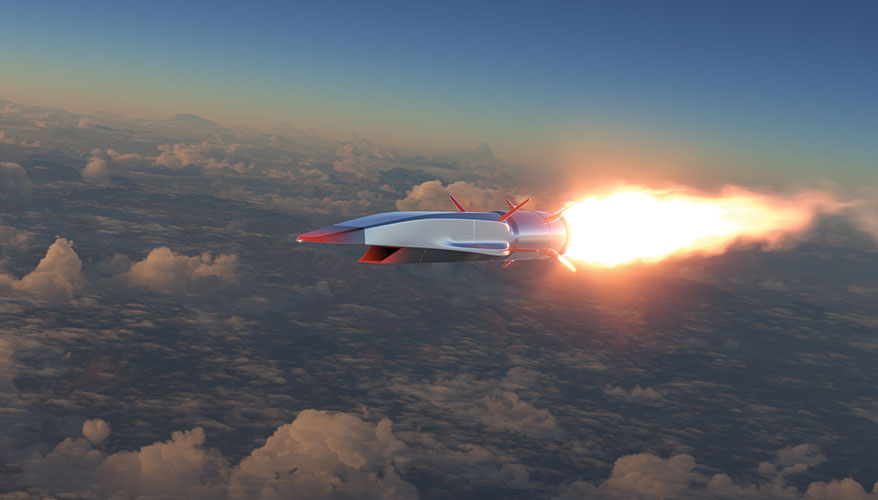 Picture a U.S. carrier battle group operating in the South China Sea. At the center of this fleet is a Ford-class nuclear-powered aircraft carrier. The ship has more than 70 aircraft onboard and cost the United States $13 billion to construct.

It has multiple layers of protection, including a screen of Aegis-equipped warships and a combat air patrol of jet fighters, supported by an E-2 airborne early warning aircraft.

Suddenly, explosions rock the carrier. A volley of hypersonic impactors has struck the ship from different directions. They were detected far too late for any meaningful defensive measures to be activated. At best, the carrier is now heavily damaged and must depart the combat zone to make repairs.

The loss of a carrier’s capability in the opening stages of a conflict would hinder the U.S. military’s ability to operate in the area, perhaps decisively. This is a central concern for U.S. strategic planners. It is also cited as an example of the value of hypersonic weapons technology.

Yet it is important to remember that the lesson of this scenario is not the capabilities of hypersonic weapons, but the threat posed by them. The ability to place carriers at risk could affect future defense posture and raise doubts among allies and adversaries alike about U.S. resolve.

Despite this, the Defense Department is requesting for fiscal year 2023 almost 20 times as much for offensive hypersonic systems as for hypersonic defense, according to the Congressional Research Service. This gives far too little funding to defensive systems, given U.S. security needs.

Weapon systems that disrupt the status quo are usually more harmful to the stronger power. Over the past half-century, the United States and its allies have built up an almost unassailable advantage in conventional capabilities. Recent operations have given U.S. adversaries plenty of opportunity to identify vulnerabilities. Having put some hypersonic systems into service in recent years — with Russia claiming to have used theirs in combat in Ukraine — they clearly feel that hypersonic weapons provide a cost-effective way of countering that superiority.

History shows that the ability to defend against or neutralize a new weapon is often of great importance to the status quo power. During both World Wars, British control of the sea was challenged by submarines. Development of countermeasures against submarines, such as depth charges, sonar and radar, was critical to British security. Realizing this, Britain made sure to lead the world in these technologies through World War II.

Hypersonic weapons specialize in hitting the types of targets that give the United States its edge. They are useful against important, heavily defended targets — both mobile targets such as command and control and aircraft carriers, and fixed sites such as airbases and heavy air defense systems.

Moreover, an adversary would have greater difficulty striking these targets with conventional systems than the United States would. Allowing an opponent to use hypersonic weapons freely levels the playing field, negating the effort and resources the United States has put into conventional superiority. This is true regardless of which hypersonic systems it possesses. The countermeasure is at least as important as the weapon itself.

Weapons development has always been contextual. It is important that the U.S. military pursues development while considering its own needs. There are several capabilities that could prevent a hypersonic weapon from hitting its target. It could be killed directly, either kinetically by an interceptor or via directed energy. It might even be more effective to prevent the weapon from completing its mission without destroying it; this is known as a “mission kill.”

A hypersonic weapon may be unable to reach the target if forced to maneuver excessively to evade interception. It might also be possible to use directed energy to blind its sensors or jam onboard guidance.

Given such weapons’ range, there is the age-old method of limiting an opponent’s intelligence, surveillance and reconnaissance. This includes shooting down reconnaissance aircraft, jamming satellites, or employing deception to blunt the effectiveness of long-range weapons. This would be particularly important for the defense of a moving target such as a carrier. These possible solutions need to be explored further to determine which work best.

This is not to say that offensive systems should not be pursued, indeed some synergy can be found in their development. For example, to intercept a hypersonic weapon, a kinetic interceptor would itself probably have to be hypersonic; its development would require knowledge of hypersonic dynamics, control and sensing. Also, a key strategy in countering hypersonic weapons could be to proactively attack their launchers. Hypersonic weapons would be effective in this role.

When discussing emerging technology in weapons development, it is important to acquire the right weapons for the nation’s needs.

Hypersonic weapons may be an asset to the United States in their own right, but their greatest strategic impact is that they reduce the nation’s relative combat advantage. If it is possible to mitigate this effect, then it is of the utmost importance that we procure these capabilities.

Clock Ticking for U.S. Military to Defend Against Hypersonics