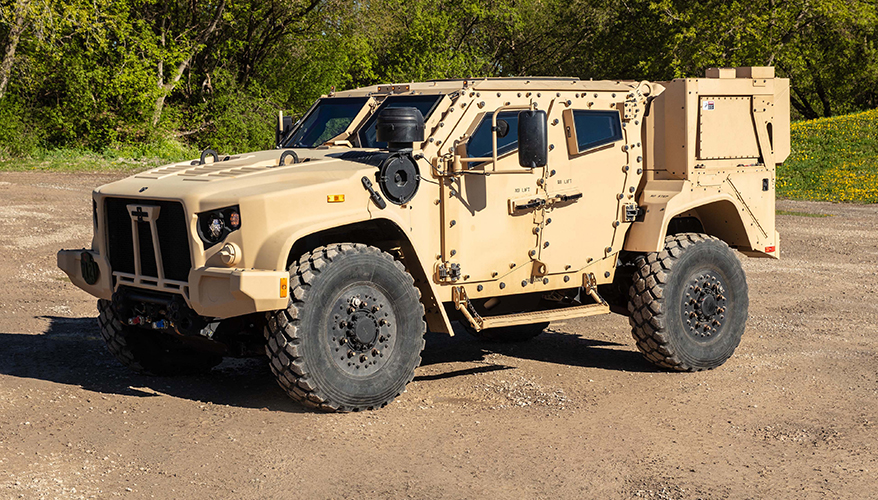 The Jan. 25 unveiling of the platform came as the Army and Marine Corps, through a joint program office, are set to kick off a major competition for a follow-on variant of the JLTV. Michael Sprang, head of the JPO, recently told National Defense that a request for proposals is due by the end of January. Companies such as AM General, Navistar Defense and GM Defense are expected to compete alongside Oshkosh. The contract has been projected to be worth up to $6.5 billion.

“We developed the eJLTV to offer our military customers an affordable way to electrify the light tactical wheeled vehicle fleet without compromising performance or protection,” he said during a virtual press conference.

The company’s electrification approach for the vehicle is based on commercially available components and technologies, he noted. The system's lithium-ion batteries charge while the platform’s diesel engine is in use. The batteries have a capacity of 30 kilowatt hours and can be used for 10 years. It takes about 30 minutes to charge them.

The vehicle also has export power up to 115 kilowatts, which will eliminate the need for many towed generators, he said.

Nader Nasr, vice president of engineering for Oshkosh, noted that the eJLTV’s curb weight increased by about 1,000 pounds but the physical dimensions and capability of the original platform have not been changed.

So far, the company has developed one fully integrated version of the eJLTV, Bryant said.

The company will also be able to be retrofit the technology into existing JLTVs that have been built for the Army and Marine Corps if requested, he added. The company has manufactured more than 15,000 platforms at its Oshkosh, Wisconsin, factory.

The contractor decided to embark on a hybrid-electric variant of the platform after listening to feedback from the military, he said.

“Electrification of the ground vehicle fleet has become increasingly important to our military customers,” Bryant said. “I've been listening to senior leaders in the Army for a few years and we've talked at great length about what electrification brings to the table.”

While a hybrid-electric capability is not expected to be a requirement for the recompete, Oshkosh believes it will help the company stand out.

The contractor's embrace of the technology demonstrates “to our Army and Marine Corps customer that we're not just sitting back waiting to see what's going to appear in a request for proposal,” Bryant said. “We're listening to the customer thinking about what the customer wants, what the future battlefield will call for, and we're investing Oshkosh independent research-and-development money to provide the customer what he needs, whether it's in the recompete or not.”

I think the eJLTV is a welcome addition, especially for those ground units that require "Silent watch and running" such as USMC Force Recon, EOD, USSOCOM, Special Operations Forces, Scouts, and other unique units.

If I were the DoD and Defense corporations, I'd focus more on developing new stabilized armored remote weapon station turrets with FLIR fire controls similar to what the Russians have for their GAZ Tigr 4x4 tactical trucks. These new armored turrets are similar to the Cadillac Gage AAV7 .50cal with Mark 19 40mm AGL turret (and stabilized), but have a 30mm cannon and 7.62mm COAX. While the CROWS II and RIwP are nice RWS for the USA, they have three flaws in that their ammo boxes are exposed on the exterior of the vehicle and thus require the vehicle crew to pop the roof hatch to expose themselves to reload; their guns are exposed on the outside and can take dirt, enemy fire, and damage; and also these USA RWS don't have smoke grenade launchers whereas the Russian GAZ Tigr armored turret is fully enclosed, armored, has smoke grenade launchers, a roof hatch, and fire controls, and allows for reloading under armor because the guns are under an armored turret. The JLTVs can benefit from these new fully enclosed armored turrets because in a firefight, no crewmember wants to pop the JLTV roof hatch and get outside to reload---this has happened at remote Fire Bases in Afghanistan where the M1114 HMMWV crew all sat inside and got shot at by AK-47s, PKMs, RPKs, SVDs, and RPGs because the enemy fire was too intense to get outside and reload the primary roof gun, RWS or not. If the JLTV's engine is disabled, then the fully enclosed armored RWS turret will be a lifesaver compared to the exposed RWSs that the US DoD fields.