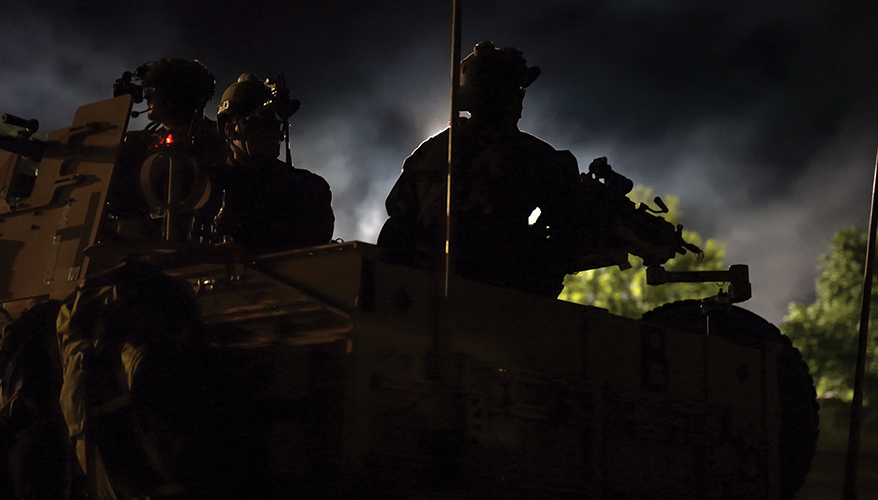 Marine Raiders are some of the nation’s most elite warfighters, but Marine Corps Special Operations Command is pushing to make them even better with its “Cognitive Raider” initiative.

The Marine Corps Special Operations Forces 2030 strategic vision outlined the Cognitive Raider innovation pathway, asserting that troops sent into future special operations environments “must be able to understand them and then adapt their approaches across an expanded range of solutions,” adding, “While tough, close-in, violent actions will remain a feature of future warfare, MARSOF must increasingly integrate tactical capabilities and partnered operations with evolving national, theater and interagency capabilities across all operational domains, to include those of information and cyber.”

To facilitate that understanding and adaptation, MARSOC has implemented an annual event called the Cognitive Raider Symposium, also known as CRS. Co-hosted with the Naval Postgraduate School’s Defense Analysis Department, the multi-day gatherings provide myriad learning venues designed to hone the Marine Raiders’ tactical edges. Significantly, the symposium not only addresses the Cognitive Raider pathway, but also illustrates MARSOF as a true connector of ideas and concepts.

Opening the third iteration of the symposium in early June, Col. John Lynch, MARSOC deputy commander, identified several key traits that help to define a Cognitive Raider, offering, “It starts with being a problem solver, one that never becomes complacent but instead remains adaptable and forward thinking.”

Douglas Borer, chair of the Defense Analysis Department at the Naval Postgraduate School, noted the conference’s focus on “frontier technologies,” offering both low-tech and high-tech examples while discussing how the technologies might alter tactical and strategic realities against a background of great power competition with nations such as China and Russia.

“When I asked what frontier technologies a Cognitive Raider mostly followed, the list included things like automation, AI, advanced manufacturing, biotech, quantum computing, 5G, next-gen hardware robotics and space,” said Matt Stafford, a State Department representative. “These largely follow State’s concerns. I know we both have much longer lists that we’re also paying attention to, but it’s good to hear that we share these worries. We also share some of your background worries about how these things will get used, or combined with each other, or just combined with existing technologies.”

The CRS series brings in speakers from diverse and unique backgrounds. This approach was reflected in presentations by writers and analysts P.W. Singer and August Cole, co-authors of the novel Ghost Fleet, which has appeared on the Commandant of the Marine Corps’ Professional Reading List.

Singer noted that he had been asked to speak on the topic “What comes next?” adding, “There is a challenge in that, particularly to the defense space, where the belief is that wrestling with the future is something that we shouldn’t do, because we get it wrong so often.”

Against that caveat, Singer discussed the implications of China’s 19th Party Congress’ order for the Chinese military to “accelerate the development of military ‘intelligentization.’”

“We need to use new modes of visualizing and communicating about the future,” he asserted. “Given all of this change, individuals, organizations and nations that don’t recognize, wrestle with and try and make changes will be making a decision through their inaction. They will be making a decision to lose the future, and I hope none of us do that.”

Cole said his and Singer’s brand of FICINT — fictional intelligence — or “useful fiction,” represents a new way to write realistic narratives in a way that helps the military plan and prepare for an uncertain future. He pointed to several of the frontier technologies and offered his own perspective on their impact for the Marine Raider community and Raider culture as well as the larger U.S. Special Operations Command enterprise.

Along with creative thinking and exploring “shifts in cognitive modalities,” Raiders also received a number of program briefings from across the Defense Department and several industry partners.

Lt. Col. Glenn McCartan from the Defense Innovation Unit noted the distinction between “those who invent technology and those who take it and use it.” DIU was created in 2015 to help connect the Pentagon with tech hubs such as Silicon Valley. McCartan identified the organization’s value proposition for the special operations community as brokers with access to commercial dual-use technology, highlighting the importance of “bridging the gap” between commercial and military technology innovation.

McCartan observed, “It’s not about finding the technology. It’s about implementing it.”

Not surprisingly, one of the Defense Innovation Unit’s portfolios involves artificial intelligence and machine learning, an increasingly critical arena that served as the centerpiece for a dedicated “AI 101” presentation by Gokul Subramanian, engineering lead at defense technology company Anduril. He described the company’s involvement in the development of counter-unmanned aerial system technology and cautioned the audience over the likely necessity to re-define “drone swarms” as scenarios shift from “four or five drones flown at a base” to “500 drones.”

Subramanian identified “neural networks” as “the frontier of where we are going,” supporting that with a wide-ranging presentation that addressed issues ranging from concepts for defeating increasingly common facial recognition software, to the possibility of inserting “AI poison” into a potential opponent’s OODA — observe, orient, decide and act — loop.

The symposium included a panel on “AI Applications in Intel/ISR” led by representatives from the Johns Hopkins University Applied Physics Lab. Presenting their personal visions of future AI implications from spectrum superiority to safe and assured operations, they offered application examples for military intelligence, surveillance and reconnaissance while also acknowledging ongoing work on a “counter-AI initiative.”

Bentivegna emphasized the criticality of space domain awareness at a time when “space is becoming congested.”

In the evolving era of great power competition, he expressed the command’s desire to explore partnering with MARSOC and Special Operations Command, observing, “China has a satellite in space with a grappling arm. And Russia has anti-satellite weapons in orbit that could kinetically kill satellites. It’s all in that gray area. What is an act of war in space and where is space going in the future?”

The symposium also included venues for Raiders to share their personal thoughts and field ideas through an essay contest co-sponsored by MARSOC and the Naval Postgraduate School. While 16 essays were received and posted to wide dissemination, the top three award winners presented their efforts directly to the audience.

One example was provided by critical skills operator Staff Sgt. Franklin Baker, who focused on the notional creation of what he called “the Greatest Mesh Network,” through the integration of an Android Tactical Assault Kit device with a goTenna Pro X affixed under the wings of a Stalker VXE unmanned aerial system. Describing the architectural elements step by step, he said special operators could “create our very own mesh network with an aerial component that defeats line-of-sight obstacles in every operating environment.”

Other award-winning essay presentations ranged from “Brilliance in the Basics” of space weather to “Edge Computing and Tomorrow’s Operations” versus relying on the cloud.

The Naval Postgraduate School’s presentations provided a critical strategic framework from which Raiders could view key technologies. As an example, Dr. Ryan Maness, assistant professor in the school’s Defense Analysis Department and director of the DoD Information Strategy Research Center, asserted that China is the biggest threat to the United States right now but cautioned that the U.S. government might be “over-hyping” that threat, with some early evidence indicated that China “might be hitting a wall.”

Offering examples of Chinese efforts to obtain rather than develop critical technologies, he observed, “It’s difficult to innovate when you’re cheating.”

He characterized Russia as “outmatched in the conventional domain but punching above their weight in the cyber and information domains.”
Dr. Tommy Jamison, assistant professor of strategic studies at the defense analysis department, outlined his perspective on technology and strategy in Chinese history.

Noting a great historical debate within China over a continental frontier versus a maritime frontier, he said, “In China today, the lessons of history are used as a springboard for military modernization.”

“History and geography are fundamentally relevant to Chinese leaders,” he added. “And for that reason, it is relevant to anyone who is serious about confronting China, and that would include everyone in this room as some of the most serious people engaged in that effort.”

Looking forward, symposium attendees explored how the MARSOF 2030 vision links to an emerging Marine Special Operations Command focus on an operating concept identified as Strategic Shaping and Reconnaissance, or SSR.

Described as “encompassing those activities conducted by special operations elements in cooperation, competition and conflict to gain awareness of adversarial intentions and capabilities in order to deter, disrupt, deny or increase the adversary’s risk,” the concept includes a wide array of skills and equipment to provide shaping and influence effects to be achieved through a hybrid approach utilizing selected special operations core activities and programs applied through intelligence operations, direct and indirect actions, and persistent development of ally and partner relations.

The SSR concept is expected to be a focus for future iterations of the Cognitive Raider Symposium. In the meantime, Raiders are working to incorporate the lessons from this year’s event across MARSOC, demonstrating the power of the “Cognitive Raider” initiative and its application for the future.

Marine Special Operators Set Out to Prove Themselves

Jack of all trades, master of none. SOF should stick to what SOF is good at, and not let creep overly complicate the mission. Let the techs do the teching, secret squirrels do the secreting, and SOF do the SOFing; there is already too much overlap between SOCOM's constituent components.

Everybody is always looking to justify their budget line.