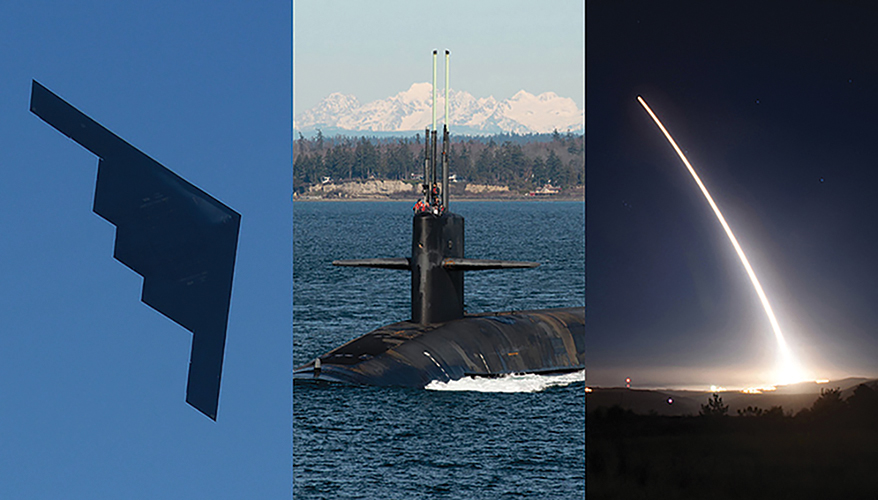 In August, the Pentagon began its Nuclear Posture Review, a six-month process of comprehensively evaluating the U.S. nuclear arsenal and strategic doctrine.

The review, which every U.S. president has discharged since Bill Clinton, is an important opportunity for the Biden administration to revisit the full spectrum of nuclear policy and set out a blueprint for a 21st century posture. In a world returning to great power competition, U.S. security relies more than ever on a robust and sustainable strategic arsenal and nuclear production enterprise.

With this opportunity in hand, the administration should consider and build on the recommendations of the last Nuclear Posture Review in 2018, which noted that the current U.S. nuclear triad — which was largely put into place in the 1980s or earlier — is aging.

“Unlike potential adversaries,” the NPR observed, the United States “has not executed a new nuclear weapon program for decades.” Instead, ongoing work focuses on life-extension programs for existing weapons and maintaining atrophying production and delivery capabilities.

The primary concern for the upcoming review must be the aging of the triad, which to an alarming extent is at least 30 years old and has not enjoyed steady recapitalization in nearly as long.

For example, the current land-based intercontinental ballistic missile force exclusively consists of 400 Minuteman III ICBMs, deployed throughout the United States in underground silos. These missiles, first deployed in the 1970s, were designed for a 10- to 20-year lifespan — and yet through life extension have been retained for over two-and-a-half times that intended period.

This trend applies to the other legs of the triad: the most advanced nuclear capable aircraft, B-2A bombers, carry cruise missiles from 1982 that are now more than a quarter century past their design life, and Ohio-class submarines — initially introduced in 1981 for an intended 30-year service life — have been life extended to 42 years, carrying ballistic missiles which have also had their lives extended.

This aging process is a clear and present concern for the security of the United States and its allies, and sustainment cannot continue indefinitely. Although the replacement of these missiles and systems will undeniably be a significantly expensive undertaking, it will have to be done eventually — and without action, will simply become more painful as time passes.

But even if the Biden administration fully addresses the life extension of nuclear weapons, it will also need to take seriously the 2018 review’s conclusion that the strategic environment has evolved. As a result, the administration must update the nation’s posture to respond to emerging threats. Specifically, the previous review recommended that the United States be able to respond to adversaries with “tailored deterrence options” that specifically address the possibility of adversaries’ “mistaken confidence that limited nuclear deployment can provide a useful advantage over the United States and its allies.”

To make good on these objectives — a modernized and innovative nuclear triad that can deter adversaries and assure allies — the new NPR must begin not only a project of steady recapitalization, but also an effort to build a nuclear production enterprise that can sustain a cutting edge force into the future.

Earlier this month, satellite photos indicated that North Korea is at least capable of — if not actively resuming — production of nuclear weapons. In stark contrast, this country is not. The United States lacks the manufacturing capacity necessary to support its own life-extension programs or stabilize the strategic arsenal in the face of uncertainty.

As the secretaries of defense and energy said in 2008, the nation is simply unable to produce nuclear weapons in the way it did in the 20th century, if indeed it can at all. The 2018 review admitted that “the United States largely relies on dismantling retired warheads to recover lithium to sustain and produce deployable warheads,” a practice which cannot support the nuclear replacement program, to say nothing of innovations that will be necessary to update the strategic triad.

To maintain an effective nuclear posture, the United States will have to do more than simply execute a new nuclear weapon program, though this is an important step. It must also close the gaps in funding for infrastructure, as well as research and development, in order to revive and sustain the nuclear production enterprise.

One promising pathway to this goal is the bipartisan Stockpile Responsiveness Program of the National Nuclear Security Administration, which attempts to stimulate these capabilities by modernizing production facilities and encouraging new research from weapons scientists and engineers. Additional funding for this program could be an effective way to return the nuclear posture to a clean bill of health.

The upcoming Nuclear Posture Review has an important, and historic, opportunity to bring the U.S. enterprise into the 21st century after decades of neglect. Although there is no doubt that there are many worthy modernization priorities, the administration should remember the previous NPR’s conviction that “the highest priority of the Department of Defense is deterring nuclear attack.”

The administration owes the American people a Nuclear Posture Review that responsibly and sustainably achieves that goal.