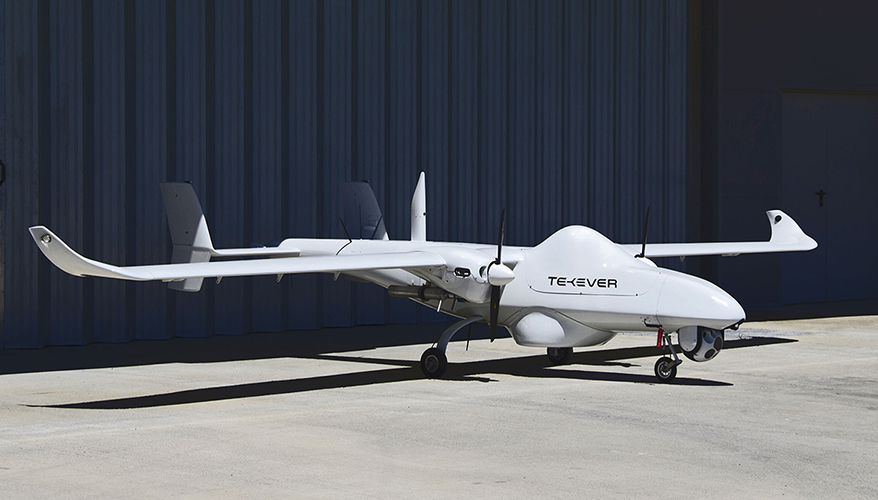 LONDON – Drone company TEKEVER wants to use its unmanned aircraft and artificial intelligence technology to save lives in water emergencies by dropping life rafts to those in distress.

While the drone technology — called the Lifesaver onboard system — can’t rescue people, it could help prevent deaths from hypothermia and exposure to the elements, said Chief Operating Officer Paul Webb. The system is currently being offered to the European Maritime Safety Service, a European Union agency that enforces safety regulations.

“We developed a system where we can deploy at least a raft so that they can get out of the water,” Webb said during the Defence and Security Equipment International conference in London. It helps them stay alive until a manned asset can arrive to complete the rescue, he noted.

The raft is not motorized and can hold up to eight people, he noted.

Cameras on the drone capture images of an area and artificial intelligence algorithms then process the images to detect areas of interest. The drone then alerts an operator and the user can use a zoom function on the camera to see if the object is a person in the water.

The AI software then calculates the optimal point to drop off the raft, so it reaches the individuals in distress in a safe manner, according to a press release.

Because the system’s AI algorithms can process data about weather conditions and flight plan restrictions, the operator doesn’t have to wait for the perfect conditions.

"Beyond detecting people in distress, we can now immediately do something to help them,” said CEO Ricardo Mendes in a press release.

The company recently completed testing off the coast of Portugal, and the system will be deployed using the manufacturer’s AR5 drones, he said.

The AR5 drone — TEKEVER’s newest unmanned offering — can cruise at 60 mph and can operate for 20 hours at a time.