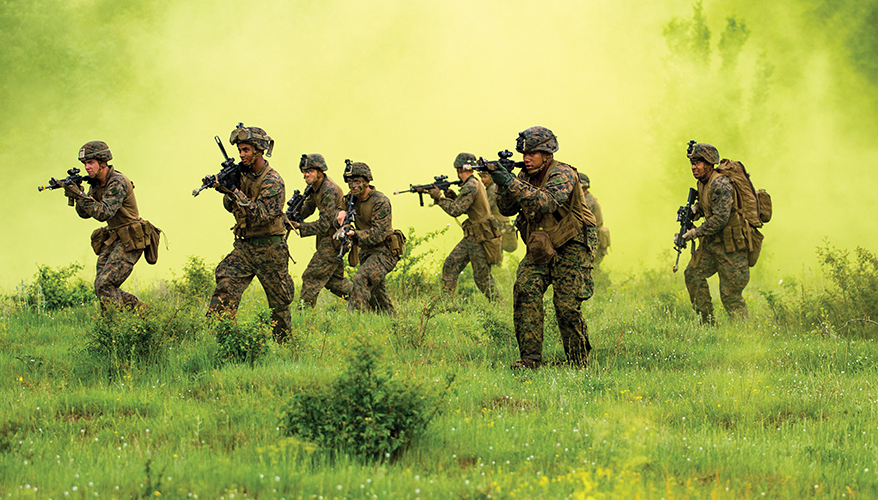 Commandant Gen. David Berger said prioritizing next-generation capabilities and cutting troop numbers by nearly 3,000 Marines this year are part of a strategy to prepare for the future.

“It's not shrinking the size of the Marine Corps to save money and then pour that money into the new force,” he said at an event co-hosted by the Center for Strategic and International Studies and the U.S. Naval Institute. “It’s sizing the force for what you need, what you think you'll be asked to do in the future.”

“Sometimes ... smaller, but better, is what you need,” Berger said.

Last year, the commandant released his “Force Design 2030.” The plan calls for divesting some of the service’s legacy capabilities and reducing infantry battalions and tanks to make way for new systems.

Berger said it is a challenge to balance what is needed immediately with ensuring the success of the Marines in a future fight.

The force needs to be able to meet the challenge of a contested operating environment, he said, noting that supply lines will likely be at risk of disruption in future conflicts in the Indo-Pacific region.

“We need the organic mobility to move the force," he said. "We need distribution means that we don't have right now to move supplies and sustainment laterally inside the weapons engagements. Assume they're going to be contested."

He noted the force has moved away from some capabilities like heavy armor and towed cannon artillery.

“Those are decisions that are hard to make because it would be great to hold onto everything and all of your structure, and ... protect it all,” he said. However, “in my estimation, that force was not going to be a good match for what we need to do in the future."

Berger's comments were delivered at a time when the Marine Corps and the other military services are trying to ready themselves for a potential conflict with China in the Indo-Pacific region, an area where some officials believe ground platforms such as tanks might not be as useful as other weapon systems.

“That teaming part is where we're going to generate actually this velocity, the speed, the momentum that we're going to need in the future,” he said.

Clarification: This story was updated to clarify the organizations which hosted the event.

What good is having the amount of force that's needed if Military Leadership is kneecapped by ceding military missions to the State Department?

As of June 24, 2021 the Administration was slated to keep 650 troops at Bagram after the withdrawal, and 8 days later Biden blew up the region. Big balls on divestment on legacy systems, balless on keeping Marines alive.

It would seem to me we need more marines not less. In the past as will be in the future, marines will be called on to do some very heavy lifting. With all the experience we had fighting the Japanese in the Pacific and the Chinese in Korea, eliminating organic direct support tanks and artillery seems foolish. To disperse marines but provide no direct support because of a hostile environment seems like a losing strategy on the very front end. Why deploy them at all if support is going to be a problem.

Most of the senior staff of all military branches need to be fired if not arrested.

Berger is the worst commandant ever. Reminds me of a general who told me that because one is in the Marine Corps does not mean that he is a Marine. This idiot spends too much time in Biden's cellar playing electronic war games with the Secretary of Defense and his senior military staff. Our warfghters will no longer be killed in combat, they will be murdered as the result of delusional ROEs, WOKE and CRD. Glad I was in the Old Corps.