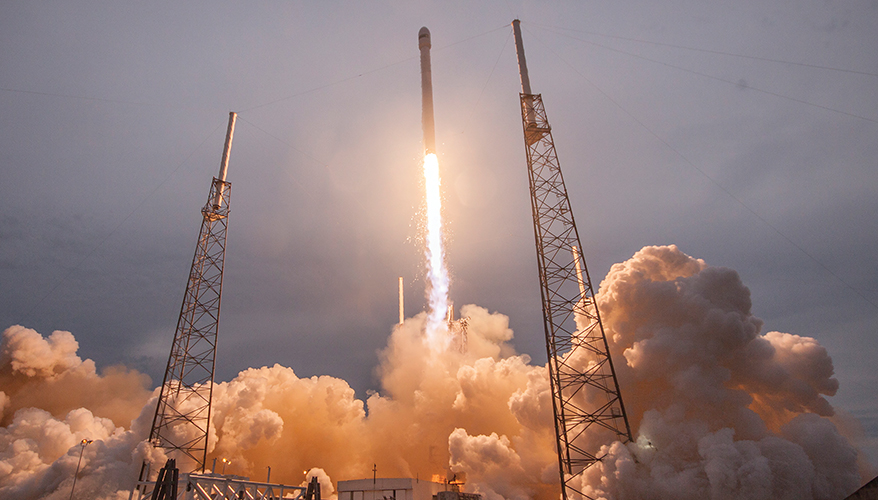 The Space Force hit a new milestone in June when it launched a national security payload into space on a reused rocket for the first time.

The service’s Space and Missile Systems Center — in partnership with the National Reconnaissance Office — is managing the National Security Space Launch program, which enables the acquisition of launch services aimed at ensuring continued access to space for critical missions.

In March, the service awarded ULA and SpaceX four of the contracts for missions scheduled for 2023.

In August 2020, both companies were awarded firm-fixed-price, indefinite delivery requirement contracts for the program.

SpaceX was assigned USSF-67, which is scheduled for launch in the fourth quarter of fiscal year 2022.

The Space Force has “collaborated extensively with industry since 2016 to develop standards for launch vehicle reuse,” Pentecost told National Defense in an email.

The contract for the launch contains no restrictions on previously flown boosters, he said. “The USSF worked with SpaceX to accelerate the use of previously-flown boosters.”

Prior to the June mission and the subsequent GPS III-6 mission — which was slated to launch in the third quarter of 2021 — SMC reviewed over 440 changes to the booster and 380 verification steps to gain insight into SpaceX’s rocket refurbishment processes, Pentecost noted.

The firm — which was founded by Elon Musk — has been on the forefront of reusable rockets and has helped prove the business case that they are a sound investment, said Kaitlyn Johnson, deputy director for the Aerospace Security Project at the Center for Strategic and International Studies.

Because SpaceX has proven the viability of reusable rockets, companies such as Rocket Lab are now reworking their launch vehicles to be reusable, Johnson said.

Rocket Lab, a California-based aerospace manufacturer and small satellite launch service provider, unveiled in March its plans to build off of its existing capabilities to create a reusable launch vehicle, which is expected to be operational in 2024, according to the company.

Meanwhile, U.S. adversaries such as China and Russia are also investing in reusable rockets, Johnson noted.

Some Chinese firms, such as Galactic Energy, are already developing reusable launchers. The company’s Kerolox Pallas-1 launch vehicle will be partially reusable and is slated for a test launch in late 2022.

Advantages of recycled rockets include lowered cost due to reusability and a decrease in space debris, Johnson said. One recent, high-profile instance of worrisome space debris was the uncontrolled reentry of a Chinese rocket back to Earth.

The Long March 5B — a variant of China’s largest rocket — successfully launched the first module of a new Chinese space station from Wenchang in May. However, the mission launcher then began making an uncontrolled reentry into Earth’s atmosphere. Debris from the rocket eventually landed in the Indian Ocean.

“Everyone was up in arms” over the event, Johnson said. Not only was the uncontrolled reentry dangerous in terms of its potential to impact people or property, but there was a risk of it releasing large amounts of dangerous chemicals, she noted.

A reusable rocket is “more environmentally friendly, because you’re not having it crash back into Earth and release chemicals, and you’re not leaving it up in space to become a really big piece of space debris,” she added.

“It’s really encouraging to see more companies and countries looking into it, just for the business case, but also for this space sustainability argument,” she said.

Meanwhile, although the National Security Space Launch program is seeing success with its use of SpaceX reusable rockets, it still has hurdles to overcome with ULA’s rocket.

As part of the effort, ULA bid and intended to fly its new Vulcan Centaur rocket for national security space launch mission USSF-51.

However, the rocket is not on track to be certified by the Space Force to fly by the late 2022 deadline, so the service agreed earlier this year to use the company’s legacy Atlas V.

“The phase 2 launch service procurement contract was established with flexibility in the first two order years to minimize risk to meeting mission requirements, and the contract has a defined process for substitution of a secondary certified launch vehicle,” Pentecost said. “ULA determined the best solution to meet this mission’s requirements was the Atlas V launch vehicle and the government concurred.”

One issue with the Vulcan rocket is its engine, the Blue Origin-built BE-4.

According to a report released by the Government Accountability Office in June titled, “Weapons System Annual Assessment: Updated Program Oversight Approach Needed,” the Vulcan is “experiencing technical challenges related to the igniter and booster capabilities required.”

If ULA is unable to complete its engine qualification before its 2021 flight certification, it may continue to rely on the Atlas V — which uses engines manufactured in Russia — to support its launches, the report said.

The 2015 National Defense Authorization Act prohibited the award or renewal of a contract for national security space launch activities that include the use of rocket engines designed or manufactured in Russia.

However, “a subsequent amendment to the statute provided an exception for contracts awarded through 2022 for such procurements that include the use of a total of 18 rocket engines designed or manufactured in the Russian Federation,” the report said.

According to Pentecost, Blue Origin’s BE-4 is currently in pre-qualification development testing with full qualification testing expected to start in the fourth quarter of 2021.

“The government continues to work closely with ULA and Blue Origin to address development challenges and complete qualification of the BE-4 main stage engine,” he said. “The Vulcan development and certification schedule supports its first mission requirement in early [fiscal year] 2023 and all subsequent NSSL missions.”

The Vulcan Centaur has to fly at least twice before it can become certified by the Space Force. Vulcan’s first launch slated for 2021 was to carry Astrobotic’s Peregrine Lunar Lander. The second was to launch Sierra Space’s Dream Chaser cargo spacecraft to the International Space Station in 2021.

ULA President and CEO Tory Bruno said the need to coordinate with those companies is the reason the rocket’s certification will face delays.

“From a ULA perspective we are looking good for a launch this year,” he told National Defense via email. “However, there is more to selecting the launch date than just ULA. We are working with our two customers for the first two Vulcan flights — Astrobotic and Sierra Space — and at this time, it is looking like they won’t be ready to launch until 2022.”

The law states that the Defense Department must stop ordering launches that utilize Russian RD-180 engines by the end of 2022. “ULA has already received delivery of the last RD-180 engines anticipated, and they are safely stored in our factory in Decatur, Alabama, so this will not be a concern as we transition to our new Vulcan launch vehicle,” Bruno said.

Meanwhile, the Space Force is also looking to utilize the NSSL program to continue to develop new launch technology through research, development, test and evaluation efforts.

“As a first step in a long-term, continuous RDT&E program, Congress authorized and appropriated $15 million for next-generation engine testing,” Pentecost said. “This prototype effort will advance the state-of-the-art in rocket engines, including new technologies to enable space access and mobility.”

Congress also authorized $75 million for upper stage resiliency enhancements, which is a prototype project that will advance upper stage rocket technology. The upper stage of a rocket provides the system with in-space propulsion to set the spacecraft on precise trajectories, according to NASA.

In addition, the service is investing $37 million on an orbital transfer prototype project that will improve space access capability for national security space launch systems.

“This effort is focused on space access capabilities where ‘space access’ refers to launch-related capabilities that move payloads from the surface of the Earth to their designated operational orbits,” he said.

The military and NASA’s investment in space launch has allowed the commercial space sector to expand, Johnson noted.

“The U.S. government being a dependable customer has really invigorated and allowed commercial space launch companies to invest private money and raise money” to create new capabilities, she said.

These firms “could have a really great stable customer in the U.S. government, and so that has brought rise to SpaceX and all these new space launch companies,” she added.

Some of these businesses — such as Blue Origin — are pursuing both satellite launches as well as space tourism. This “opens the doors for even more economic development,” she noted.

SpaceX did not respond to requests for an interview.