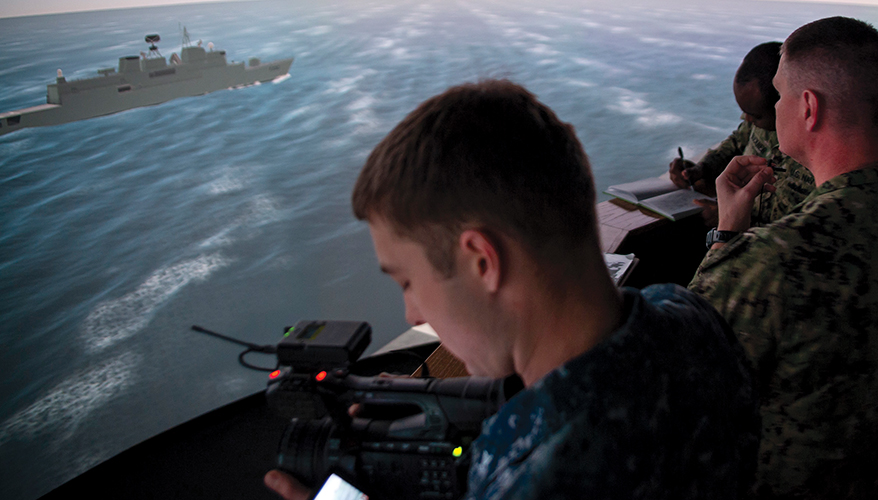 ORLANDO, Fla. — The Navy is looking to industry as it reorganizes its training offices and invests in upgraded technologies to prepare sailors for future battles.

“We continue to find things internally that we can do better … and I would ask ­— and I’ve asked this in other forums before — if you see a place where we’re doing something that doesn’t make sense, please tell us, we would like to know so we can improve on those things,” Hill told members of industry.

In an effort to bolster the modernization of its training initiatives and technology, the center has created a number of new job positions. For example, it recently stood up what it calls the “Ready Relevant Learning Training Systems” program manager position, Hill said.

The office will focus on improving individual sailor performance and enhancing fleet readiness, according to the Navy.

This was “an important part of solidifying our work and our participation in the F-35 program, which is certainly the future of naval aviation and a lot of other aviation efforts out there in general,” Hill said.

The Navy is purchasing the C variant of the joint strike fighter, which can take off and land on aircraft carriers.

“Simulators are being used like crazy by the [tactical] air fleet right now, and it’s because they’re bringing value,” Hill noted.

As an example, Hill explained that Carrier Air Wing Seven — an aircraft carrier air wing based at Naval Air Station Oceana, Virginia — typically consists of a more distributed squadron structure than other wings, which makes getting personnel together for large-scale training exercises difficult.

Last year, after the unit returned from deployment, it began “using our distributed mission training capability, and they’ve gotten to a place where they’re able to get valuable events accomplished … even in this prototype kind of configuration that we have given them today.”

The distributed mission training system is a Lockheed Martin-built capability that connects multiple aircraft together for instructional purposes.

Through exercises with Carrier Air Wing Seven, the Navy is utilizing LVC today and will leverage it even further in the future, Hill said.

The command is also employing LVC training for its littoral combat ship, he noted.

“We’ve taken some of the state-of-the-art training that we do for the littoral combat ship and we’ve gotten that out there and now it gets rave reviews from the fleet,” he said. “This whole idea of train-to-qualify, that people come out of their training already qualified to go do their job … is a reality there” with the LCS, he said.

The 2017 collisions of the destroyers USS Fitzgerald and USS John. S. McCain led to a renewed focus on simulator-based technology to train sailors. The navigation, seamanship and ship-handling trainers have undergone three phases of upgrades in recent years.

“We’re correcting the problems in the fleet that led to those two collisions,” Hill said.

Moving forward, the Navy’s focus will remain on fleet readiness, with an emphasis on improving the cybersecurity of training capabilities, he noted.

“Even these standalone training systems that don’t connect to anything have to be updated to be cybersafe,’” he said.

Although the service is working to make its systems more secure, there is still room for improvement, Hill noted.

“Frankly, one of the things we need to do better, and we need help with is how we can do cybersecurity in a much more efficient way, so that it is not as manpower intensive moving forward,” he said.

Meanwhile, the division’s training offices are working to boost the compatibility of their technologies.

The Navy and Marine Corps have been taking a tiered approach, Sullivan said. First, by “increasing the fidelity and capacities of the training systems and simulators. Second, in the virtual-constructive area moving from that individual unit level training to integrated training.”

Multiple types of aircraft at different locations can now be connected for training events, Sullivan noted.

Currently, the Naval Aviation Distributed Training Center is focused on increasing the number of platforms it can support and integrate to hold larger LVC activities between the Navy and Marine Corps, she said.

The Navy wants to connect with more entities and “the appetite is insatiable,” she said. However, the effort comes with its challenges.

“This may be an exaggeration, but imagine trying to connect a pinball machine, an Atari, a Nintendo, a bicycle and [the] F-35 to the same gaming system to play an interactive game of Halo,” she said. “That’s an example of just how many different generations of systems, different [original equipment manufacturers] and different levels of security we are trying to network together.”

The Navy received a Milestone C approval for TCTS II in late April, Naval Air Systems Command said in a May press release. The milestone clears the way for the program to transition into limited production.

The capability — which is being manufactured by Collins Aerospace — has an open architecture system that enables sailors to participate in air combat training across fourth- and fifth-generation aviation and maritime platforms. The system has a training pod that can communicate with both airborne and ground equipment.

The Navy’s training offices are also working to upgrade a number of systems related to the F/A-18E/F Super Hornet Block III configuration, which is the latest iteration of the Boeing-made aircraft.

Among its modernization efforts is an upgrade to the aircraft’s maintenance training device, Hicks said. A contract is slated to be awarded in December of 2023 with a request for proposals projected to be released in June 2022.

Meanwhile, to train its surface fleet, the sea service is utilizing its surface training advanced virtual environment, or STAVE program, which is a family of training systems.

STAVE consists of instructional technology and simulated physical environments that train sailors through repeatable and repetitive exercises and drills, according to the Navy.

The virtual environment provides the service with the ability to train sailors on engineering on the same day and in the same space as it trains sailors on combat systems without having to work from, or build, additional facilities, he noted.

Mike Merritt, deputy technical director at the training systems division, also touted the importance of enhancing interoperability among the portfolio of training and simulation technologies.

The service sees a need for systems that emphasize both individual and team training exercises, he said. As capabilities continue to progress, Navy leaders want to increase connectivity between existing simulators and hardware to provide teams with training on specific tasks with missions that are relevant to how they actually fight, Merritt said.

Although training capabilities are improving, the service still has hurdles to overcome such as a slow-moving acquisition process, he noted.

“Schedules in the acquisition world are our biggest problem,” Merritt said. “We need to be faster at what we do, we need to take more risk in how we do that.”

Where the division needs to focus on “is that upfront part of where we’re actually creating the package, getting the requirements out. … We are still going to be looking very hard at that and we are having a lot of robust discussions on how we can actually streamline these upfront and shorten our span times,” he said.