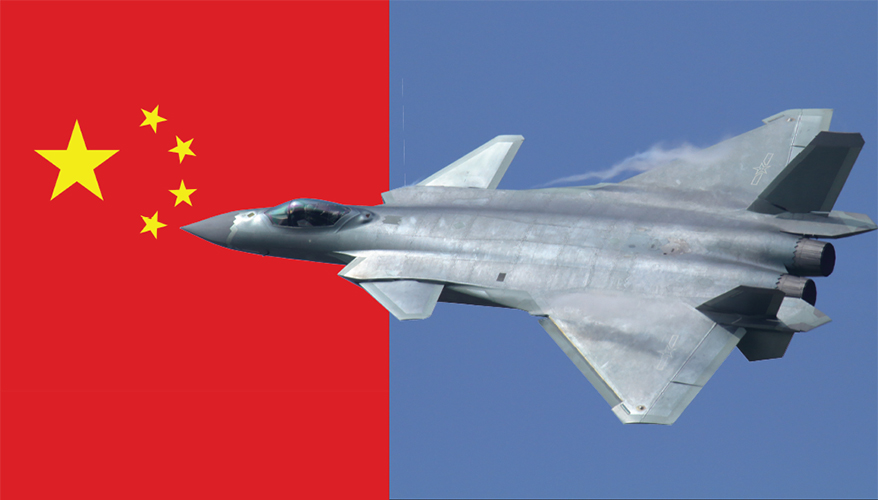 Experts say U.S. fifth-generation fighter aircraft — the stealthy F-22 and F-35 — remain the best in the world. However, China is upgrading its J-20 “Mighty Dragon” to try to close the gap.

“The PLA’s planned fielding of a fifth-generation fighter force will bolster its air-to-air capability,” the U.S. Defense Intelligence Agency said in its most recent annual report to Congress, “Military and Security Developments Involving the People’s Republic of China: 2020.”

Justin Bronk, a research fellow for airpower and technology at the United Kingdom-based Royal United Services Institute for Defence and Security Studies, said the J-20 is the “centerpiece” of the PLAAF’s modernization push.

The aircraft leverages technology designs stolen from the United States through industrial espionage, analysts have noted.

“The design incorporates many features which have been copied from the F-22 and F-35, including nose cone shaping, the electro-optical targeting system (EOTS) under the nose, and the side-mounted [diverterless supersonic inlet] intakes,” the RUSI report said.

However, “the J-20 is no mere imitation and has several design features suggesting a carefully weighted consideration of specific Chinese capability requirements,” the study noted.

The system’s internal fuel capacity and ability to carry up to four external fuel tanks will allow it to operate as a long-range interceptor and hunt down U.S. tanker and intelligence, surveillance and reconnaissance aircraft far from the Chinese mainland, it said.

However, the J-20A has some shortcomings, analysts say.

The platform is the largest low-observability fighter currently in production, the RUSI report noted. “The downside is a heavier, less agile aircraft which will be more expensive to build and operate. It also cannot compete with the extreme performance or agility of the F-22” Raptor built by Lockheed Martin.

It also features forward canards which are suboptimal from a stealth perspective, and the planes have been powered by Russian AL-31 series engines without low-observability serrated nozzles. The engines leave the aircraft “somewhat underpowered” and unable to supercruise, and also increase their radar cross section, it noted.

China claims that the J-20A also features a variety of advanced sensors, as well as a fully digital glass cockpit and a helmet-mounted display.

However, “it is very difficult to assess the credibility of the sensor suite as claimed,” the RUSI report said. “The rate of iterative development, testing and production also remains extremely high, meaning that while it may be a reasonable assumption that Chengdu have not yet solved the many challenges inherent in true sensor fusion and seamless passive sensor integration, future J-20B/C variants will continue to close the technological gap with the U.S.”

There are several different aspects of stealth, he explained in an interview. One is the exterior design and how that enables radar evasion. Heat signature and electronic emissions are also major factors that affect observability.

The United States is almost certainly employing intelligence-gathering assets to try to learn more about the aircraft. However, those efforts may only yield “informed guesstimates.”

“Those all give us a better and better picture, but not until we get our hands on the platform will we really know what they’re capable of doing,” Venable said.

During the Cold War, the United States was able to acquire Soviet fighters from nations they had been exported to, and examine them up close, he noted. However, the J-20 is unlikely to be exported for the foreseeable future as China tries to protect the PLAAF’s best air superiority asset from prying eyes, according to the RUSI report.

Despite some unknowns, Western analysts say the United States is still ahead of China when it comes to fifth-gen fighters.

Aside from very-long-range air-to-air missiles, “there are few areas of capability where the PLAAF is yet directly able to compete one-to-one with the best that the U.S. and European air forces can field,” the RUSI report said.

The F-22 is widely considered to be the best air superiority fighter in the world based on its flight performance characteristics and stealth.

However, the survivability of the F-35 in a dogfight has been called into question by some observers.

Richard Aboulafia, vice president of analysis at the Teal Group, said the F-22 is an “amazing” air vehicle, but the F-35 joint strike fighter — although stealthy — isn’t top notch when it comes to speed, acceleration, altitude and “time to climb.”

However, the Lockheed Martin-built F-35 has a “fantastic” equipment package, he added. Another major selling point is its sensor fusion, situational awareness and connectivity capabilities. It is designed to take out enemy aircraft long before they could get close enough to engage in a dogfight.

Venable believes the U.S. systems would come out on top in a head-to-head matchup with China’s platforms.

“The J-20, in my estimation, would be dead long before it had the ability to maneuver against either the F-22 or the F-35,” he said. “It’s got enough spikes on it to where the radar returns on it are likely to be much more significant, which means that the F-22 and the F-35 can see it a lot farther away.”

Because U.S. fifth-gen fighters are stealthier, “our ability to find, fix and be able to target the J-20 is going to be significantly more advanced than the J-20’s ability to target us,” Venable said.

So far, the PLAAF has operationally fielded “limited numbers” of the J-20, according to the DIA report.

The 9th Aviation Brigade was the first PLAAF combat unit known to be equipped with the system. However, an April 2021 satellite image indicates that the 1st Aviation Brigade may also be operating the jet, according to a recent paper published by the U.S. Air University’s China Aerospace Studies Institute, “Second Combat Brigade of PRC Air Force Likely Receives Stealth Fighter.”

“Having another aviation brigade transition to the J-20 would suggest that … the PLAAF is satisfied with, and confident in, the capabilities of the J-20, and that more combat units are likely to receive the J-20 in the future,” the paper’s author Derek Solen said.

In comparison, the U.S. Air Force has just over 180 F-22s in its inventory, but the platform is no longer in production. The service has more than 280 F-35As and is procuring dozens more each year. The Marine Corps and Navy are also buying variants of the aircraft.

“The PLAAF is preparing upgrades for the J-20, which may include increasing the number of [air-to-air missiles] the fighter can carry in its low-observable configuration, installing thrust-vectoring engine nozzles, and adding supercruise capability by installing higher-thrust indigenous WS-15 engines,” the DIA report said.

“The Chinese J-20A … continues to rapidly mature and improve, with the production of the J-20B variant having reportedly begun in 2020,” according to the RUSI report. “The J-20 family will be produced in the hundreds over the coming decade, constituting the foremost existing aerial threat to Western air superiority.”

The removal of canards combined with changes to the wing shape could improve the stealth characteristics of the aircraft. Additionally, China is prioritizing the development of sensors and networks to improve its planes’ passive-sensor tactics and “cooperative engagement” capabilities, to help the PLAAF compete head-to-head against U.S. forces, the study said.

“The pace of iterative improvement visible in PLAAF equipment — from aircraft and weapons systems to increasingly realistic training and exercises — is striking,” the report said. “If China can continue the level of investment, production and iteration demonstrated over the last decade, then existing capability gaps will close significantly, and more areas of outright Chinese advantage will emerge during the 2020s.”

However, the United States is not sitting still while China modernizes its fighter fleet.

The Pentagon is moving to give the F-35 Block 4 capabilities which officials say are needed for the jet to be effective in future high-end battles against advanced adversaries. The ongoing Technology Refresh 3 effort will enable about 70 upgrades, which includes 14 new weapons and a number of software-enabled systems, according to program executive officer Lt. Gen. Eric Fick.

The Air Force also plans to modernize the F-22, and it requested $425 million in fiscal year 2022 for the effort.

“The F-22 is the first operational multi-mission fighter aircraft that combines stealth, supercruise, maneuverability and integrated avionics to make it the world’s most capable combat aircraft,” according to budget documents justifying the funding request.

F-22 modernization and sustainment programs invest in upgrades to the air vehicle, engine, and training systems to improve weapons, communications, and intelligence, surveillance and reconnaissance capabilities.

Modifications to the aircraft will help counter “determined attempts to deny U.S. air superiority from peer threats within the Indo-Pacific region,” the budget documents said.

Meanwhile, the Air Force is already pursuing a sixth-gen platform that will replace the F-22 in the 2030s as part of its next-generation air dominance program, also known as NGAD.

Although the program is shrouded in secrecy, in September service leaders revealed that a prototype had already flown.
The Air Force and its industry partners are leveraging digital engineering to speed development and facilitate future capability upgrades, officials say.

“It’s not only what we build, it’s how we build it so we can stay ahead of the threat,” Air Force Chief of Staff Gen. Charles “CQ” Brown Jr. said recently at the McAleese & Associates annual defense programs conference. “That to me is an important aspect, because it is the air superiority fighter of the future.”

This article is a sad example of what passes for Defense News. The Chinese J-20 is a heavy (with emphasis on heavy which is more important than the author realizes) supposedly fifth generation fighter, though I very much doubt the author knows much more about the aircraft than what he's been told by other people who only know what they've been told by other people who....well you get my point. We only really know what the Chinese tell us and what others like India have observed (and that's still second hand information). The Chinese have several manufacturing problems they need to "iron out" before they have a truly fifth generation aircraft...they still lack an engine sufficient enough to make the J-20 truly a fifth generation aircraft, their "riveting process" while sturdy enough still leaves visible raised areas. It gets irritating that the media spends an inordinate amount of time running down US technologies while giving the Chinese and Russians credit for technology they haven't mastered yet. While it is, in the words of the Bard "best to prepare for the enemy mightier then he seems" it is more important not to assign the enemy strengths and capabilities you know he doesn't have.

Brian Foley at 11:52 AM
Re: China Upgrading Fifth-Gen Fighter Capabilities

The issue with the J-20 is is that it does not have a gun.

I don't understand why the US didn't continue with the F-22 program and why it didn't try to make carrier and hover versions of it instead of setting off on the F-35 project, which has been a huge waste of money (over a trillion dollars).

It doesn't make any sense.

Obama is an ignorant fool.

The US should have turned the F-117 into a fighter jet instead of setting off on the F-22 and F-35 projects.