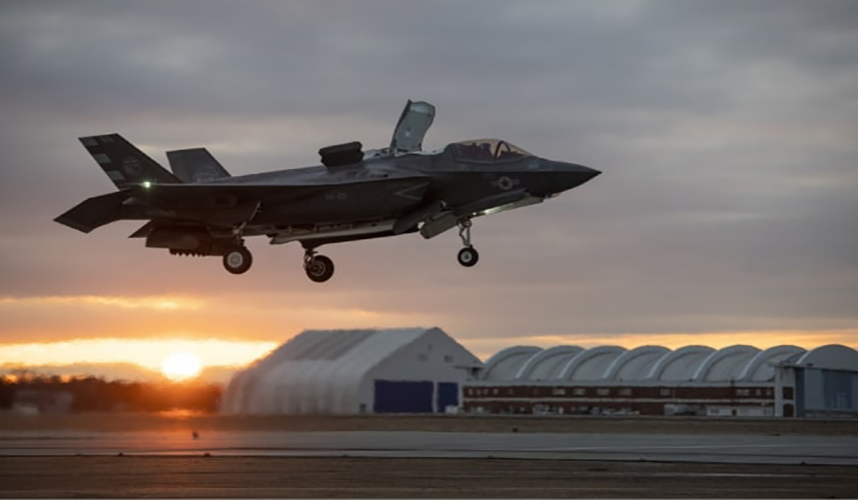 Projected sustainment costs for the F-35 joint strike fighter are unaffordable, and the problem will only get worse if no further action is taken, the Government Accountability Office warned in a new report released July 7.

Reducing such costs must be a top priority, the watchdog said in its study, “F-35 Sustainment: DoD Needs to Cut Billions in Estimated Costs to Achieve Affordability.”

The joint strike fighter is the largest acquisition project in the history of the Defense Department, with an estimated sustainment price tag of more than $1 trillion over the life of the program. The military plans to buy nearly 2,500 of the jets. The Air Force, Marine Corps and Navy are buying the A, B and C variants of the aircraft, respectively.

“The military services collectively face tens of billions of dollars in sustainment costs that they project will be unaffordable,” according to the report.

The cost to operate the platform can be as high as $38,000 per flying hour, according to estimates from the F-35 Joint Program Office.

The GAO warned that affordability will only get worse without additional actions.

The F-35 Joint Program Office created a Directorate of Affordability and an Affordability War Room, which reportedly found $68 billion in lifecycle cost savings. However, cost assessment and program evaluation officials told the GAO that they have not verified the savings calculation.

“According to several DoD officials, even if all of the $68 billion in cost avoidance were achieved, that would represent only a fraction of the cost reductions needed to reduce the program’s sustainment costs and achieve the services’ affordability constraints,” the GAO report said.

The Air Force’s situation is becoming increasingly serious, the study said. Service officials told the watchdog that the only options available to meet budget constraints may be to buy fewer platforms or reduce flying hours.

“According to Air Force officials, the steps taken by the Affordability War Room are prudent, but the results have not been sufficient to significantly improve the affordability of the program,” the report said.

Navy and Marine Corps officials told the GAO that they could resolve their cost overrun problems through existing cost saving initiatives.

In addition to affordability, the platforms’ readiness rates concerned the watchdog.

“F-35 mission capable rates — a measure of the readiness of an aircraft fleet — have recently improved, but still fall short of warfighter requirements,” according to the report.

“While the F-35’s mission capable and full mission capable rates have improved over the past two years, these rates remain well below the program’s objectives due to several significant and ongoing sustainment challenges,” the report said.

The Pentagon “partially concurred” with all of the executive-level recommendations from the GAO, which included changes such as requiring the program office to create a plan to achieve affordability and to document changes in program requirements necessary for reductions.

However, Pentagon officials noted that they would likely not be able to implement these changes before the decision to begin full-rate production.

The watchdog discouraged delaying affordability endeavors “given the magnitude of the gap between projected sustainment costs and the services’ affordability constraints.”

There's a serious and very real credibility issue surrounding the federal government, the armed services and the F-35. We read stories, almost daily, with conflicting information about the costs and sustainability of the F-35. The Air Force just released a report on how the costs continue to drop, almost to the levels of other frontline fighter aircraft and with availability of 70%...that's very positive (and impressive). Now the GAO is telling us that the F-35 is not sustainable....somebody is lying...outright lying to the American people. Of course our totally worthless Congress won't get to the bottom of this...ever. We can't trust our government, we can't trust our armed services and we can't trust our Congress...a very sad state of affairs. Me personally, I trust the Swiss....I'm sure they did their homework and decided on the F-35. It's pitiful that the American public has to rely on a foreign government for the truth.

Former Under Secretary of the Army and Lockheed Martin CEO Norman Augustine foresaw these developments in his 1984 book "Augustine's Laws." Law XVI reads, "In the year 2054, the entire defense budget will purchase just one aircraft. This aircraft will have to be shared by the Air Force and Navy 3-1/2 days each per week except for leap year, when it will be made available to the Marines for the extra day."

The F-22 is VERY expensive, thus the few numbers of it produced to date. The F-35 was meant to be all things to all services. Great "interconnectivity" with other aircraft but poor reliability and apparently high maintenance costs are its Achilles heel.
So, let's subcontract it to the Japanese to produce. If they can produce such utterly reliable autos such as Lexus perhaps they can produce a reliable F-35!

As a former Hornet pilot I would certainly take the affordability/lethality of 2-3 squadrons of properly configured Supers (66 million per plane, $10,507 - $14,000 per flight hour) for less than the price of 1 squadron of F-35s.

Escalating costs is why I am a supporter of the USAF's F-15EX and F-16 Replacement. In day-to-day operations of NORAD CONUS Air Defense, the DoD doesn't need a stealthy F-35 to intercept old Tu-95 "Bear" bombers when conventional "Radar-friendly" Generation 4.5+ fighters will do for less cost.

The USAF will always need more newer fighters and honestly, they don't have to be the latest and greatest like the F-35 when F-15EX and F-16 Replacements can do for most conflicts because we're not (yet) battling aliens with out-of-this world technologies. Save the best for the NGAD Sixth Generation fighter, and if the US DoD needs to cut F-35 production numbers to save money, then do so. Money saved can buy more new plane numbers, and the DoD needs to have more planes than any other Air Force in the world...aircraft numbers and newness matters, often no matter if the planes are stealth or not....the DoD needs quality AND quantity...because there will be many instances for the need to put planes in the sky that carry more than four (or six with Sidekick rack) internal AIM-120 AMRAAMs. Carrying 10-12 AAMs per plane can make a huge difference compared to just four AAMs, and the ability for sustained Mach 2.0+ speeds compared to Mach 1.6 for a brief time.