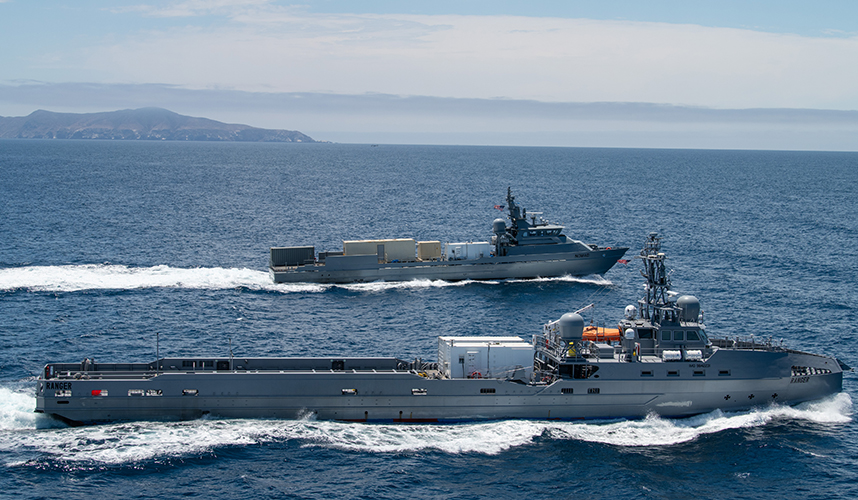 While two unmanned surface vessel prototypes continue to build trust in unmanned systems within the military, they will not yet be operated in fully autonomous mode, said a Navy official July 27.

The two autonomous test vessels Ranger and Nomad — both part of the Ghost Fleet Overlord program being spearheaded by the Strategic Capabilities Office in partnership with the Navy — recently completed major Pacific journeys in autonomous mode for more than 95 percent of their voyages. However, the vessels will continue to operate with crew on board in a hybrid autonomous mode for “some period of time,” said Capt. Pete Small, program manager for unmanned maritime systems at the program executive office for unmanned and small combatants.

“We suspect that the Navy will continue to prototype with onboard supervisory oversight as we do more Navy fleet operations [as] part of building the trust in the autonomous systems,” he said during remarks at the Association for Unmanned Vehicle Systems International’s Unmanned Systems Defense Conference.

Ranger and Nomad made voyages in October 2020 and May 2021, respectively. Nomad journeyed more than 4,400 nautical miles and was only manned when it traversed through the Panama Canal, Small noted.

Before the Navy takes over the Overlord program from the Strategic Capabilities Office toward the end of the calendar year, the ships will participate in a number of planned demonstrations and major naval fleet exercises, he said.

That will culminate in a final demonstration exhibiting the SCO's investment and “establish a technical position of transition to hand it over to the Navy,” Small said.

In addition to the supervised Nomad and Ranger, the Navy's unmanned surface vessels Sea Hunter and Sea Hawk are continuing to operate in a “truly unmanned fashion,” he said. Both autonomous and hybrid-autonomous operations are important for collecting data and proving out the reliability of the technology, he added.

“We're approaching it from a number of methods to build trust in autonomous operations and prepare for a formal transition to fully unmanned operational vehicles in the future,” he said.

Lawmakers have expressed concerns about the use of autonomous platforms in the military. The fiscal year 2021 National Defense Authorization Act put restrictions on the Pentagon’s ability to add offensive capabilities to unmanned systems until it could satisfy lawmakers that it would adhere to the laws of armed conflict and were the most appropriate vessels for warfighter requirements.

Key future advancements for the unmanned surface vessels include improved hulls, new mechanical and electrical systems, advanced networks and radios and combat systems integration, which were all initiated and developed extensively throughout the Ghost Overlord program, according to Small.

The delivery of two additional vessels for the Overlord fleet is expected soon, with delivery planned for next fiscal year, he added.