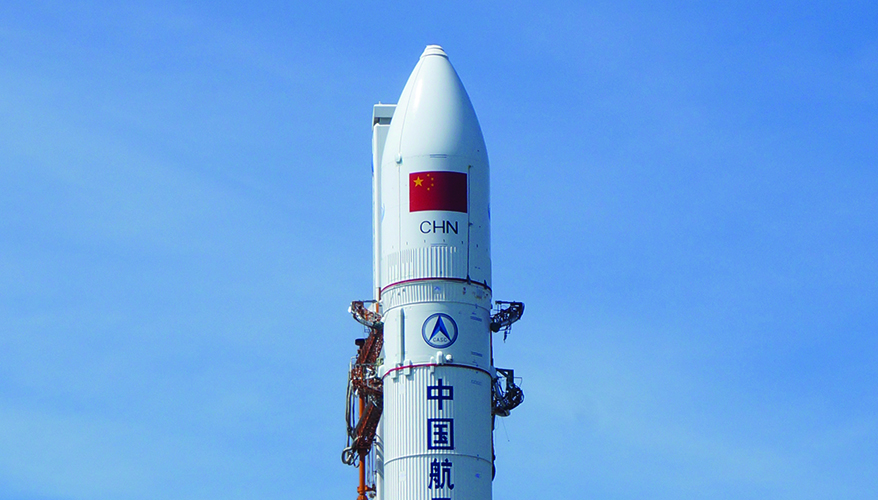 China is making progress with several space-related initiatives that are becoming a growing concern for the United States and its allies.
Pentagon officials have grown increasingly worried in recent years about the vulnerability of spacecraft to anti-satellite weapons as Beijing’s space programs continue to mature.

China recently designated space as a military domain, and official documents state that the goal of space warfare and operations is to achieve superiority using offensive and defensive means, according to a report released in April by the Secure World Foundation, a non-profit focused on secure and sustainable uses of outer space.

“China has recently reorganized its space and counterspace forces … and placed them in a new major force structure that also has control over electronic warfare and cyber,” said the report, “Global Counterspace Capabilities: An Open Source Assessment.” However, “it is uncertain whether China would fully utilize its offensive counterspace capabilities in a future conflict or whether the goal is to use them as a deterrent against U.S. aggression,” it added.

While the United States knows little about the craft, it is rumored to be similar to the U.S. Air Force’s X-37B space plane, which is a smaller, fully robotic version of a space shuttle, Weeden said.

“There is evidence that this new space plane by China went into orbit, made a few [revolutions], deployed a small satellite, and then landed at a military base,” Weeden said during a panel hosted by the Center for Strategic and International Studies. “Besides that we don’t really know anything about it.”

The United States is also monitoring China’s SJ-17 satellite, which recently made a series of orbital maneuvers and rendezvous proximity operations in the geostationary belt, Weeden noted.

“It approached and did what may have been some inspections, or just collected surveillance, of two Chinese satellites,” he said.

So far, there has been no indication that the SJ-17 has approached other countries’ satellites, Weeden said.

An area of concern for the Defense Department is an adversarial nation potentially using its own satellite to hit and damage a vulnerable U.S. spacecraft.

An option for space-based “active defense” measures would be to leverage “the ability to grab another object in space — an uncooperative object — and take it to a safe orbit or safely dispose of it so it no longer poses a threat,” Todd Harrison, director of the aerospace security project at CSIS, said during the panel discussion.

The think tank released a report, “Defense Against the Dark Arts in Space: Protecting Space Systems from Counterspace Weapons,” in April.

A space vehicle capable of docking with, manipulating or maneuvering other spacecraft or pieces of debris could come in handy, the study noted.
“Such a system could be used to physically seize a threatening satellite that is being used to attack or endanger other satellites or to capture a

satellite that has been disabled or hijacked for nefarious purposes,” it said.

Concerns are also growing about China’s development of a new space station in orbit.

The Office of the Director of National Intelligence’s new “Annual Threat Assessment of the U.S. Intelligence Community” report, which was released in April, predicts the Chinese space station will be operational in low-Earth orbit, or LEO, between 2022 and 2024.

The Long March 5B — a variant of China’s largest rocket — successfully launched the first module of the space station from Wenchang in May. The mission launcher then began making an unpredictable reentry into Earth’s atmosphere, which led to criticism from the United States and other nations about where the rocket might land and the threat it could pose to people on the ground. Debris from the rocket eventually landed in the Indian Ocean.

As the nation continues to move forward with its plans to build a new space station, it will also conduct exploratory missions to the Moon, with the intent to establish a robotic research station on the lunar surface prior to setting up a base, according to the DNI report.

It became known about 10 years ago that China was developing a new heavy-lift rocket, the Long March 9, said Richard Fisher, a senior fellow on Asian military affairs at the International Assessment and Strategy Center.

“The Chinese have been quite open actually in how they are going to go to the Moon, and especially how rapidly they might populate the Moon,” he said during a recent webinar hosted by the Center for Security Policy.

Starting in about 2018, China revealed it was making a second space launch vehicle, nicknamed the “921” rocket, he said.

“The 921 rocket only promises to be able to push about 25 to 26 tons [of cargo] to the Moon, so less than half the expected capability of the Long March 9,” Fisher said. “But because the 921 rocket was going to be based on then-existing technology, the alarm went out: China could develop this space launch vehicle much sooner, and this space launch vehicle could support an earlier, albeit much more lightweight, attempt to put people on the Moon.”

“It will be able to accomplish a circum-lunar mission,” Fisher added. Two of these could put people on the moon in the ‘26 to ‘27 time frame.”

Beijing is also making progress with ground-based directed energy weapons that could potentially be used to take down satellites, according to the Secure World Foundation report.

There is open-source evidence of four or five main sites that house the technology, Weeden said.

All of the sites have distinctive large buildings with roofs that slide back, he noted. There are smaller buildings next to the large ones that can be used for gas storage to power the lasers. In some cases, the buildings have additional smaller domes that support adaptive optics for targeting objects, Weeden said.

Two of the facilities identified are co-located with universities where the Chinese government appears to be conducting research for atmospheric optics or engineering physics, he said.

“While some of the programs identified appear to be academic and therefore are likely not ASAT systems, one location of primary concern is a military base known for conducting kinetic physical ASAT tests that is also rumored to house a laser weapon system,” the report noted.

“There is no indication of how advanced or ‘ready-to-mobilize’ such a directed energy system may be, and there has been no publicly available information about potential tests or attacks against space systems.”

This site, which appears to be a military installation, is located about 100 kilometers from a base outside of Korla, China. The government has conducted anti-satellite testing out of this base in the past, Weeden said.

While the other sites located near universities could be used for research-and-development, the location of this facility indicates it may be intended to house operational systems, Weeden noted.

As China works to match or exceed U.S. capabilities in space, counterspace operations will be an integral part of future potential military campaigns by the People’s Liberation Army. China has capabilities that can target U.S. and allied satellites, according to the DNI report.

China has already fielded ground-based missiles intended to destroy spacecraft in low-Earth orbit, and ground-based lasers that were likely created to blind or damage sensitive space-based optical sensors on LEO satellites, according to the report.

The nation is also developing a network of ground-based optical telescopes and radars for detecting, tracking and characterizing space objects as part of its space situational awareness, according to the Secure World Foundation’s report.

“Like the United States and Russia, several of the Chinese SSA radars also serve missile warning functions,” the report noted. “While China lacks an extensive network of SSA tracking assets outside its borders, it does have a fleet of tracking ships and is developing relationships with countries that may host future sensors.”

Frank Rose, co-director of the Brookings Institution’s Center for Security, Strategy and Technology, noted that as long as the United States is dependent on space systems for military operations, potential adversaries are likely to continue to develop and deploy ASAT weapons.

“From my perspective, the key challenge we face in space is how do we manage competition in a way that reduces the risk of inadvertent escalation and helps maintain the long-term sustainable safety of the space environment,” he said during the CSIS panel discussion.

As a first step, Rose believes Washington needs to rebuild its bilateral dialogue on space security with China and Russia.

The last bilateral dialogue between the U.S. and China on outer space occurred in 2016, he said. The U.S.- China space security talk was to establish a dialogue with China on space security.

“I believe [that] should be a high priority for the Biden administration,” Rose said.

Adversarial nations are developing anti-satellite weapons because they believe space represents an asymmetric vulnerability of the United States, Rose said. “I expect that Russia and China will continue to develop and deploy a full range of ASAT capabilities,” he added.

Additional steps Washington can take to manage competition in space and reduce risks of escalation are to strengthen the norms against debris-generating events and explore the development of standards and regulations regarding rendezvous and proximity operations, Rose said.

I believe the UN as a whole should be completely concerned about being out militarized. Especially after the Covid-19 "accident" that mainly affected the United States. As I see it we are a target of a soon to come well prepared possible war. In that case in mind think about how easy china could attack the United States without space advantage. Please share!
Thanks for reading my opinion!

Avery Clark - of course China can easily attack the US as long as they don't mind being crushed by our far better trained and equipped military. And COVID-19 did NOT mainly affect the US, under President Biden we took precautions and we got the vaccine out quickly. The corona virus affected many countries such as India far far more than the US.

Ron - the Chinese space plane is similar to the US X-37B but also to a very similar Soviet spaceplane and the Asset and Prime vehicles from the US. All of those spacecraft were designed under very similar limitations.

“it is uncertain whether China would fully utilize its offensive counterspace capabilities in a future conflict" Are you freaking kidding me?? Why the hell do you think they're building them???

I Highly Recommend Folks start paying more attention to Developing Issues and Reports from Antartica. Acknowledging and paying attention to this theater should Help most anyone in developing more sound theories in possible Scenarios related to Chinese interests...Good Luck.

Apparently, we aren't too alarmed. We continue to buy Chinese goods by the container ship load. Actually, we are funding the programs we claim to have such great concern about.