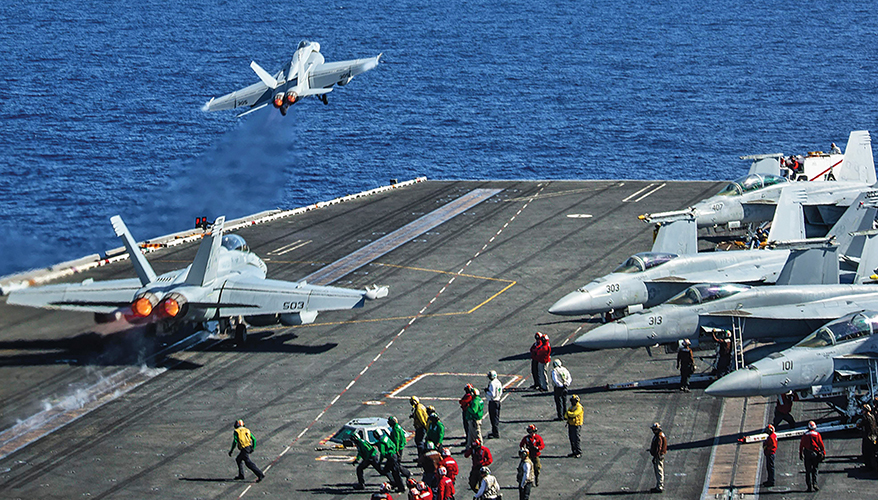 An F/A-18E Super Hornet and an EA-18G Growler take off from the flight deck of the aircraft carrier USS Theodore Roosevelt.

President Joe Biden’s 2022 budget would continue a trend of providing a growing portion of the military’s resources to air and naval forces— raising questions about how low the Army’s topline will go as a share of the Pentagon’s fiscal pie in coming years.

Air and naval forces went from a 48 percent share of the defense budget in 2013 to a 52 percent share in 2021, while the portion going to ground forces shrank from 35 percent to 32 percent during that same time period, said Travis Sharp, a research fellow at the Center for Strategic and Budgetary Assessments.

The shift coincides with the United States’ refocus on great power competition with China, which the Pentagon has identified as the primary “pacing threat,” he noted.

“Most experts agree that military competition and conflict with China will primarily — although not exclusively — occur in air and naval” domains, Sharp said. “For that reason, I think it’s logical to expect that DoD would be allocating a bigger share of its budget to air and naval forces relative to ground forces.”

The Army in particular has been the bill payer for the other services’ fiscal plus-ups, he said.

“For me that sort of raises the question of whether or not there’s a floor on how far ground forces can go in terms of their share of the budget,” Sharp said. “We’ve already seen some public commentary and debate about whether or not funding should be reallocated from the Army and the ground forces to the other services. And so I expect that that will be one of the big questions and big debates, both in this budgetary year as well as in future years.”

People, readiness and modernization are the service’s top priorities, said Brig. Gen. Michael McCurry, director of force development in the office of the deputy chief of staff, G-8.

“The pressure on the [research, development and acquisition] accounts was felt in FY ‘22 with a $4.2 billion reduction,” he said during a recent panel hosted by the Association of the United States Army.

The service tried to protect its “31-plus” modernization priorities and key enablers from the budget axe, he noted.

Since 2018, Army leaders have been “looking under the couch cushions for funds” through their “night court” program reviews that are aimed at freeing up money for top modernization projects in an era of fiscal constraints, he noted.

In the first few years of night courts, the Army shifted about $30 billion from other programs to its modernization priorities, according to McCurry.

Those efforts will continue. However, “the struggle there is we have picked all the low hanging fruit … and cut most of our [lower priority] programs about as far as we could go,” he said. “Further reduction would force us to make some hard choices between modernization priorities and sustainability of those enduring programs” for upgrading older systems.

Re: Air, Naval Forces Eating into Army’s Share of Budget

Not mentioned adequately is the fact that the Defense Budgets are going to shrink in general as the debt grows and inflation rises. At some point something has got to give....and the first in line in the Biden Administration's view will be the military. So while article after article touts new "this" and better "that" the reality will be something altogether different...so get use to making due with what you have...and maybe fewer of them as well, because it's going to get worse before it gets better.

If China is the number one threat, combat will largely be a sea, air and space battlespace. The US is unable to prosecute a ground war in China and the Chinese are still unlikely to drive up the 405 into LA. The Army's role is relegated to ally and US territory defense and in a budget-constrained environment, the Army will have to live with less of the pie.