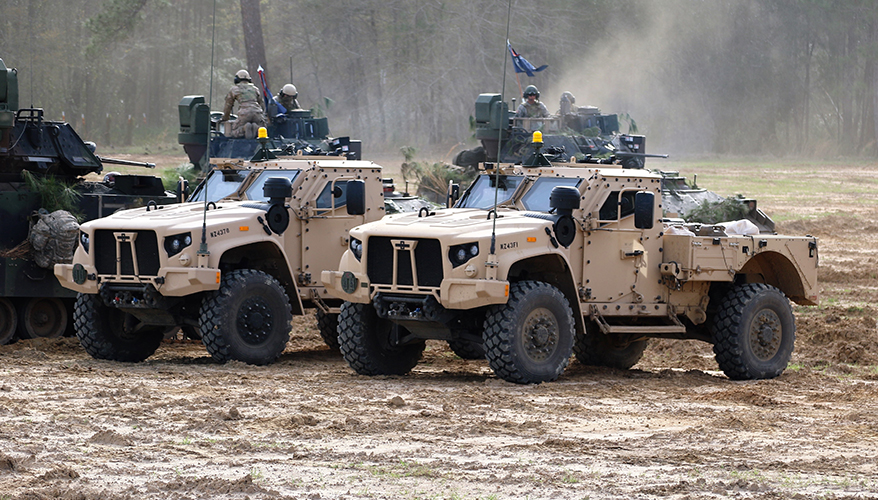 The Army could leverage the burgeoning U.S. truck market for its tactical wheeled vehicle needs if it could do a better job of communicating with manufacturers, a Government Accountability Office report released July 15 said.

“The Army does not always communicate information about future plans in a coordinated manner or provide a consistent message to industry,” the report titled: “Tactical Wheeled Vehicles: Army Should Routinely Update Strategy and Improve Communication with Industry.”

GAO investigators spoke with company officials and trade associations and found a good deal of frustration on the part of executives. The U.S. truck industry is flourishing, the report noted, but many manufacturers are not participating in Army vehicle programs. The service is losing out on increased competition as well as innovative technologies, GAO added.

“Leveraging additional companies’ commercial technology advancements could facilitate competition or potentially reduce the cost of the vehicles the Army needs as well as the cost of developing new capabilities,” the report stated.

For example, companies spent their own funds to develop capabilities and prepare for submitting an offer after listening to Army requirements. When the service later chose not to pursue new capabilities, the companies lost their investments and thus were less likely to be involved in future efforts, the report said.

The Army also has not updated its tactical wheeled vehicle strategy since 2014, executives noted, which makes it hard to know where the service is heading, the report stated.

The Army is developing a new tactical wheeled vehicle strategy for 2022 to guide decisions, but the strategy will not capture all relevant initiatives for determining its needs, GAO found. To inform its 2022 strategy, the Army is first conducting a study — set to be released in July — to identify the capabilities and requirements needed for the vehicles in multi-domain operations, which differ from the counterterrorism missions of the past.

The service will issue its new tactical wheeled vehicle strategy in fiscal year 2022, which will not account for all relevant initiatives that could help with planning for future vehicles, GAO found. One example is an infantry brigade combat team study that will have a pronounced effect on the number and types of vehicles recommended for these teams, GAO found. It’s unclear whether that study will be completed in time to help inform the vehicle study, the watchdog added.

Also, the Army is researching electrification — such as next-generation ion batteries with advanced power storage capacity — for use within the truck fleet. The effect of research-and-development efforts on the number and types of vehicles in the fleet will not be fully known until projects are completed and further analysis can be performed, GAO found.

“Some initiatives have been completed, some are still in progress, and some do not have a clear end date,” the report stated.

Commercial truck manufacturers were also reluctant to participate in Army programs, listing well-known complaints about working on government contracts. The process is too slow and the federal regulations too burdensome with long development timelines making some technology already obsolete by the time the trucks reach the field, they said.

Meanwhile, there is no Army directive, policy, or guidance calling for the service to routinely update the results of tactical wheeled vehicle studies or strategies.

GAO made two recommendations: The secretary of the Army should direct the appropriate offices within the service to routinely update its tactical wheeled vehicle strategy to account for evolving information and circumstances.

Also, the secretary should direct the appropriate offices within the Army to better coordinate external communication with industry to assure their assessment of needs for tactical wheeled vehicles are consistently communicated.

The Army in the report concurred with both suggestions.

There are times when the Army does a good job of communicating what it needs, but the the Military Industrial Complex manufactures something that looks good, but cannot function in harsh austere environment for extended periods of time in a reliable manner. This is a disservice to our service men and women who DEPEND on this equipment to get them into, and out of combat. The JLTV is an excellent example of RELIABILITY being a primary quality resident in a piece of combat equipment, and they will make a great replacement for the Hummer.

I say this because the Chinese PLA has a similar 6x6 MRAP design that carries a box tube launcher of forty Drone Swarm UAVs over the two rear axles---the US Do has no counter and no similar truck. There are just some mission requirements that need a 6x6 M-ATV, and the 6x6 M-ATV can fit a 13 Marine squad in one armored vehicle.

The problem with the US Army is that it's taking a tactical weapons and cargo truck and trying to make it into a versatile truck for C4ISR and all sorts of weapons and other duties. There are no sub-offices created to attach Air-Defense Avenger turrets, SPIKE box launchers, 30mm RWS, Active-Protection systems, shelter carriers, etc. Each has to be an independent PEO, so now the US Army just focuses on the truck chassis and mechanics itself when the add-ons are an afterthought. Thus, the JLTV (FMTV, HEMTT, etc.) are just seen a logistics vehicles without the tactical additions, ambulatory, shelter modifications, protective equipment, or combat-proven mission requirements that the soldiers need. More add-ons means more work for the Tactical Truck team with no extra hired workers. That needs to change if the US Army wants to bring more combat and logistics capability into the field besides using the same PEO team...the Army management team needs more workers.

Prototypes exists of other more capable JLTV and FMTV variants, but the management pyramid is so narrow that it affects mission and National Security if one PEO gets to decide and delegate. Thus, more flexibility and a horizontal management structure is needed instead of the pointy pyramid of command. If the tactical truck management team were to branch out horizontally with more hired people, then I think the needs of the soldiers and DoD can be better met and fulfilled and the requirements to truck industry better communicated. Right now, it's like too many people are harping on the one PEO Director and Team to make decisions that add on more work for PEO Truck Type when it should be several PEO Directors branching out from the basic truck chassis to make other truck variants.